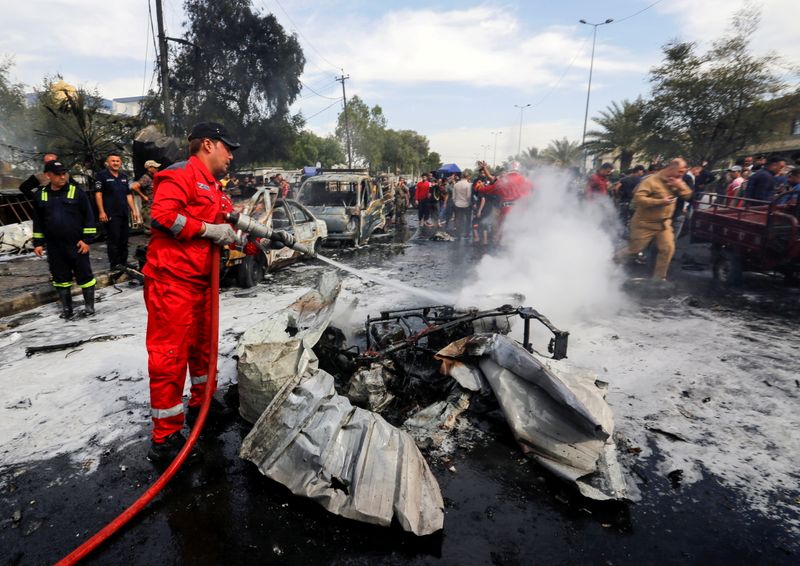 BAGHDAD (Reuters) – A series of attacks in Iraq this week illustrates the increasingly dangerous tangle of local and regional rivalries confronting the country’s security in an election year, Iraqi security and government officials say.

The violence appears linked to militias seeking to help ally Iran oppose Western and Gulf Arab adversaries in a tussle for influence playing out across the Middle East, as well as to growing domestic strains head of elections in October, they say.

Drone and rocket attacks in northern Iraq by pro-Iran groups indicated that militias are expanding the arsenal they are prepared to deploy against U.S. forces stationed in the country.

The strikes also for the first time killed a Turkish soldier, and a rare car bomb blast in Baghdad afterwards showed that security forces are struggling to keep a lid on local violence after years of relative calm in the capital.

Rivalry between Iran and the United States remains the biggest destabilising factor, despite the departure of former President Donald Trump and his tough rhetoric and fresh talks on Iran’s nuclear programme among world powers, the officials said.

Wednesday’s attack on U.S. forces at Erbil International Airport was the first time an explosives-laden drone was used against a U.S. target in Erbil, an Iraqi security official said.

“Drone use is a worrying development. We’re seeing a change in the way (U.S.) targets in the Kurdistan region are hit, as a message that these groups can choose the time and place of their assaults without being stopped,” the official said.

The security official, an Iraqi military officer and a government official all blamed militia groups supported by Iran for the attack.

They said it was likely retaliation for a recent attack on Iran’s Natanz nuclear facility, widely believed to be carried out by U.S. ally Israel. Israel has not formally commented.

Militia supporters cheered the attack but no group has claimed it so far.

Iraqis often pay the price for escalating U.S.-Iran tension, said Jassim al-Hilfi, an Iraqi lawmaker. “This is the second time in just a few weeks that (pro-Iran) militias have been able to target Erbil. They don’t want Iraq to be secure,” he said.

Iran and the United States this month agreed to indirect talks over Tehran’s nuclear programme, eyeing a possible return to an international pact that Trump abandoned in 2018 before piling sanctions on Iran and killing its top commander Qassem Soleimani in a drone strike in Baghdad last year.

Since President Joe Biden took office, Iraqi militias have pressed their demand that a remaining force of 2,500 U.S. troops leave Iraq, and have continued attacks against the United States and its regional allies, deploying more sophisticated weaponry.

Several Western officials, one Iraqi militia official and an Iranian security source said a thwarted drone attack against Saudi Arabia in January was launched from Iraq, part of an increase in attacks by Iranian proxies against the Gulf kingdom.

Iran has not commented on recent attacks against U.S. forces, but has previously denied involvement in such strikes.

The killing on Wednesday of a Turkish soldier in a rocket attack on Turkish troops stationed in northern Iraq – a separate attack to Erbil but at around the same time – also complicates Iraq’s fragile security.

Turkey has been waging a campaign against separatist Kurdish PKK militants who operate in southern Turkey but are based in the mountains of neighbouring northern Iraq. The PKK has Iraqi allies aligned with the Iran-backed paramilitaries.

Iran-backed militias this year ramped up their rhetoric against the Turkish presence, calling Turkish troops an occupying force which, like the Americans, must leave. No group immediately claimed the attack that killed the Turkish soldier, but analysts say it was carried out by pro-Iran militias.

“Militias seem to have opened a new front with Turkey and drew blood. They might be inviting trouble,” said Bilal Wahab, a Fellow at The Washington Institute for Near East Policy.

Iran’s proxies see Turkish incursion there as a threat to their gateway to Syria, a key smuggling route for weapons, personnel and goods.

Iran and Turkey might not have the appetite for escalation. “We’ll see if this attack on a Turkish base is swept under the rug, or whether it will be a game-changer,” Wahab said.

Turkish authorities did not immediately respond to a request for comment.

The increasingly complex strategic picture heaps pressure on Prime Minister Mustafa al-Kadhimi, who has tried in vain to curb militia power and wants a peaceful, free general election in October. Added to his plate are domestic rivalries in a country where violence has often spiked during election years.

On Thursday, a car bombing killed at least four – the second incident to shatter the relative calm Baghdad has enjoyed since Islamic State’s 2017 defeat. No group claimed Thursday’s blast and security forces have not yet publicly identified a culprit.

Some Iraqi politicians say the blast was Islamic State trying to cause chaos. Others say it could be rival Shi’ite armed groups seeking to intimidate each other ahead of the vote.

Either way, it shows armed groups can move weapons around Baghdad under the noses of security forces, analysts say.

“The government … has neither the political ability to deter militias from carrying out attacks nor the security wherewithal to stop them and hold them accountable when attacks happen,” Wahab said.

A spokesman for the Iraqi government did not immediately respond to a request for comment.