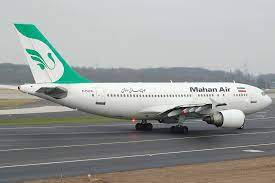 Iran’s second-largest airline, Mahan Air, said it had been hit by a cyberattack Sunday, the latest of several targeting the company.

“Mahan Air’s computer system has suffered a new attack,” the company said in a statement.

“It has already been the target on several occasions due to its important position in the country’s aviation industry.”

All of its flights were on schedule, the statement added, but the company’s website was down.

According to Mehr news agency, some Mahan customers had received text messages that said: “Cyberattack against Mahan for complicity in the crimes committed by the terrorist Guardians Corps” — a reference to Iran’s elite Revolutionary Guards.

It has been on the blacklist of Iranian companies targeted by US sanctions since 2011.

In addition to a domestic network, it also serves destinations in Europe and Asia.

Iran last month accused Israel and the US of a cyberattack on its petrol distribution system that caused havoc at fuel pumps nationwide.

Israel’s internet infrastructure has meanwhile been hit by cyberattacks by the Black Shadow hacking group, including against the largest Israeli LGBTQ dating site and an insurance firm.

The hacking group has not acknowledged any link to Iran, but the attacks are widely seen as part of a years-long covert war between Israel and Iran including physical attacks on ships and offensive cyber moves online.