The uprising of Iranians against their clerical government continued Tuesday with protest rallies held by students and calls for nationwide demonstrations on Wednesday.

The mourning ceremony for Nasrin Ghaderi turned into a scene of protest in the western city of Marivan where residents chanted anti-regime slogans.

Ghaderi, 35, who was a philosophy doctoral candidate in Tehran died on Saturday after being beaten by security forces with baton during Friday’s protests.

A video received by Iran International shows a girl cutting her hair at the grave of this young woman, as a symbolic act against forced hijab.

Iran’s official news agency IRNA has dismissed media reports that Ghaderi was killed with baton strikes, saying she was “living her normal life” when her family suddenly lost touch with her, and once their son-in-law broke into her residence in Tehran, they found her dead.

In the meantime, several calls for protest have been issued for Wednesday in Zahedan and other cities on the occasion of the 40th day after “Bloody Friday of Zahedan”.

The Bloody Friday in Zahedan, the provincial capital of Sistan and Baluchestan took place September 30, when security forces killed at least 93 people, and injured hundreds more. Zahedan is one of the few Sunni-majority cities in predominantly Shiite Iran.

Amid high inflation and an economic crisis, a group of retired teachers and civil servants gathered in front of the Planning and Budget Organization in Tehran to demand their unpaid pensions and benefits. 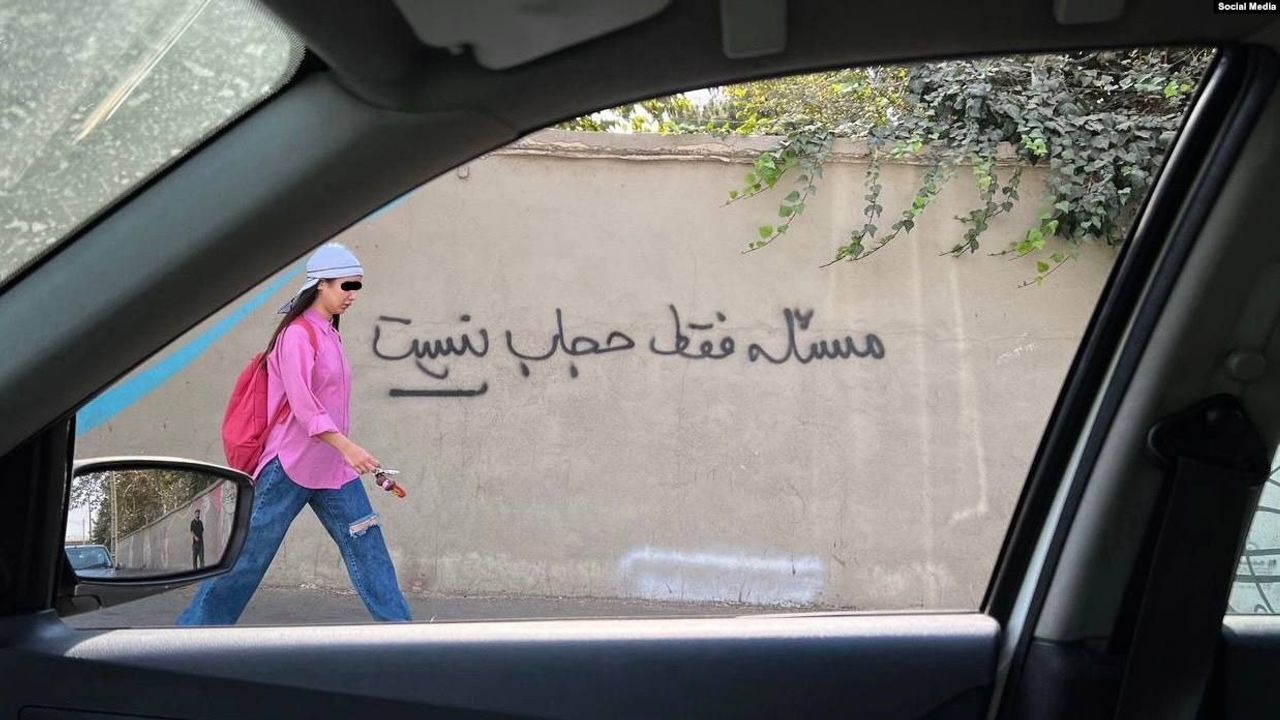 Another video shows a protester setting fire to a Qassem Soleimani banner. Soleimani, commander of the Revolutionary Guards (IRGC) extra-territorial Quds Force, was killed in Baghdad along with nine others in 2020 by a drone strike ordered by then-President Donald Trump.

The Islamic Republic and its supporters have portrayed Soleimani as a beloved hero, but protesters who want to topple the regime regard him as a war criminal who was responsible for killing both Iranians and others, such as Syrians during that country’s civil war.

Since September, people have destroyed Soleimani’s statues and pictures including in his hometown to show anger at regime’s propaganda.

A hardliner member of the Islamic Republic parliament called the move an “anarchic hate crime” that is becoming a public issue, he said.

Ali Asghar Annabestani said Tuesday that “the enemy has very cleverly turned people’s protests into an anarchist riot, and protesters break all the boundaries that can be sacred for human society.”

“The people and government do not tolerate doing this to a national hero, so the security organizations must step in and prevent such acts. Destroyers should be identified and punished and then introduced to all people,” added the MP.

In another development, Zahra Rahnavard, the wife of dissident figure Mirhossein Mousavi, in a message demanded the release of imprisoned students and an end to threats, suspensions and expulsions of schoolchildren. Stating that “protest is the nation’s right,” she added “Respect the youth, don’t kill the nation’s children and listen to the nation’s voice.”

Zahra Rahnavard’s husband Mirhossein Mousavi, who has been under house arrest since February 2011, was Iran’s Prime Minister from 1981 to 1989. He was a candidate in the disputed presidential election in 2009 and challenged the results leading large protests for months before he was arrested and put under house arrest without a trial. His wife Zahra Rahnavard and another candidate Mehdi Karroubi suffered a similar fate as all three were accused of “sedition” against the regime.

Reports say after darkness fell on Tuesday, people in Tehran began chanting slogans on rooftops and at their windows, while people in the flashpoint Kurdish city of Sanandaj in the west took to the streets lighting fires and chanting antigovernment slogans.