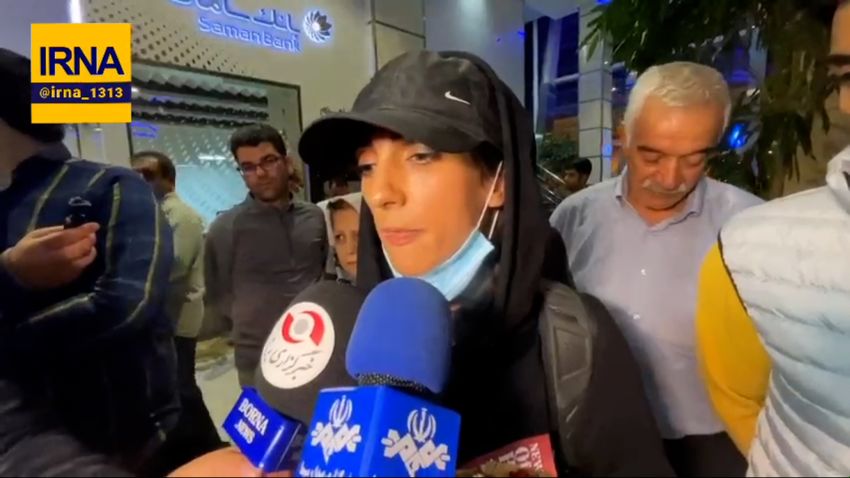 The family home of Iranian rock climber Elnaz Rekabi has been demolished, according to the pro-reform news outlet IranWire, after she rose to international prominence this fall for competing with her head uncovered.

Rekabi competed without her hijab in South Korea in October, just as anti-regime protests swept Iran following the death of 22-year-old Mahsa Amini while in the custody of the morality police for allegedly not wearing her hijab properly.

Some Iranian demonstrators saw Rekabi as a symbol of the national uprising calling for greater freedoms for women. However, human rights groups expressed fears for her safety when she returned to Tehran.

Rekabi competed without her mandatory hijab at an international competition in Seoul in October, as anti-regime demonstrations calling for greater rights for women convulsed Iran.

Footage obtained by CNN from Iran Wire shows a destroyed structure and medals on the ground. The man filming the video clip describes what has happened to the house. The video clip also shows Rekabi’s brother, Davood, crying. Davood Rekabi is a sport climber champion himself with ten gold medals to his name, according to IranWire.

The man filming the footage – whose identity is not known – says off camera, “This is the result of living in this country. A country’s champion with kilos of medals for this country. Worked hard to make this country proud. They pepper sprayed him and demolished a 39 sqm house and left. What can I say?”

It is not clear when the demolition took place.

CNN cannot independently confirm if Rekabi’s family home was destroyed by order of the government. Neither the authorities nor state-aligned media have commented on the situation publicly.

Rekabi garnered support from members of the public when she returned to Tehran in October.

Footage of Rekabi wearing a headband with her hair in a ponytail while competing in Seoul went viral on social media and made international headlines. When she returned to Iran, videos posted to social media appeared to show her being greeted by crowds chanting “Elnaz the Hero” at Tehran’s Imam Khomeini International Airport.

The climber wrote later that week on her Instagram account, “I am endlessly grateful for the support of you, all the people of Iran, the most decent people of the planet, athletes and non-athletes, and all your support in [the] international community.”

Rekabi has suggested – both on her Instagram account and in interviews with state media IRNA – that she had only “accidentally” competed without her hijab, which Iran mandates must be worn by women representing the country abroad.

However, it is unclear whether Rekabi’s comments were made under duress.