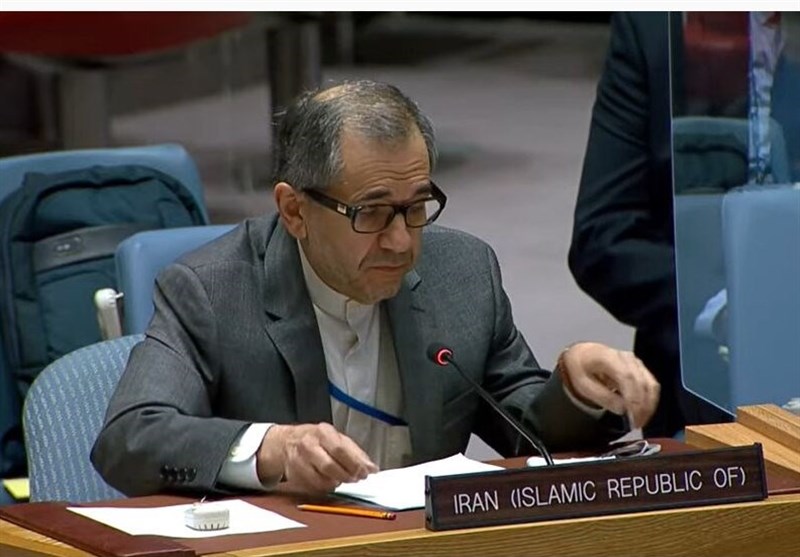 Iran’s ambassador to the UN denounced the Zionist regime for committing the most systematic and gross violations of the rights of children in the Middle East, describing the barbaric Israeli acts as clear manifestations of genocide, war crimes and crimes against humanity.

Addressing a UN Security Council meeting on “Children and Armed Conflict”, held in New York on Monday, Majid Takht Ravanchi called for the punishment of the Israeli officials for the fundamental breach of norms and principles of international law.

The following is the full text of the Iranian ambassador’s speech:

“Protection of children, particularly girls, in armed conflicts is a fundamental moral and humanitarian principle and every effort must be made to ensure that it is fully respected by all parties in all conflicts.

Nevertheless, it is highly alarming that according to annual report of the Secretary-General on children and armed conflict, “In 2020, the situation of children in armed conflict was marked by a sustained high number of grave violations.” Unfortunately, many of such violations have occurred in our neighborhood from Afghanistan to Yemen to Palestine.

The most recent example of such violations in Afghanistan is a cowardly terrorist attack that took place, on 8 May 2021, in front of the Sayed Al-Shuhada school in the community of Shi’ites of the Hazara minority in Kabul, killing 85 and injuring 147 others, mostly schoolgirls.

This and other deadly terrorist acts in Afghanistan, mostly committed by Daesh, targeting certain religious and ethnic minorities as well as women and girls, underscore the continued need for combating terrorism as well as brining the perpetrators of these reprehensible acts to justice.

In Yemen, in 2020 the United Nations verified the killing and maiming of 194 by the so-called Coalition to Support Legitimacy in Yemen, as stated by the Secretary-General in his annual report. Nonetheless, on 22 June 2021, Yemeni children marched across the country stating that in more than six years, as a result of the attacks by that Coalition, over 3,500 Yemeni children were martyred, more than 4,000 were injured, thousands were orphaned, and millions were displaced from their homes. They also expressed their strong dissatisfaction with the United Nations for not properly reflecting in its reports of such grave violations of the rights of Yemeni children.

Yet, the most systematic and gross violation of the rights of child in the Middle East continues to be committed by the Israeli regime. According to the annual report of the Secretary-General, in 2020, the United Nations verified 1,031 cases of grave violations against 340 Palestinian children, including killing 11, maiming 324 and detaining 361, as well as 30 attacks on schools and hospitals by Israeli forces.

Only in its 11-day brutal and all-out war on Gaza in May 2021, Israeli forces killed 253 Palestinians, including 66 children. This includes 13 members of an extended family who have been killed and buried in the rubble of their own home — many of whom were children, one as young as six months. Israeli forces also destroyed 30 health facilities and around 50 schools.

These barbaric acts are clear manifestations of genocide, war crimes and crimes against humanity, materially breach fundamental norms and principles of international law, and entail international responsibility of the Israeli regime, whose officials must therefore be brought to justice for committing such heinous crimes.

Protection of children in armed conflicts primarily requires putting an end to the current conflicts and preventing their re-emergence and the eruption of new conflicts as well as ensuring the full and effective implementation of international humanitarian law by the conflicting parties.

The mechanism to list the parties violating the rights of children in armed conflicts must also be used effectively and without discrimination and selectivity. It is a source of grave concern that the Israeli forces have never been blacklisted as violators of children’s rights in relevant reports of the Secretary-General and also the name of the so-called Coalition to Support Legitimacy in Yemen has been deleted from the top of that list.

We share the views of several Council members as well as significant number of other Member States that have expressed concern in recent years on discrepancies between the violations described in the reports of the Secretary-General and the listing of the parties in their annexes, as well as the premature de-listing of parties, calling for a consistent application of the criteria for listing and de-listing parties, and stressing the importance of upholding the impartiality and integrity of such mechanism.

Moreover, one of the missing elements of the Secretary-General’s report on children and armed conflict seems to be the absence of assessment about the adverse impacts of unilateral sanctions on the protection of children in conflict situations, where sanctions most often deteriorate the economy, exacerbate the living conditions and ultimately render the children vulnerable to recruitment by terrorist groups, force them to leave their family and home and join displaced communities, and deprive them of proper education, health services and the like. This important factor deserves serious attention by the Secretary-General in his future reports.

Finally, protection of children in armed conflicts is the protection of our future societies. This is a noble humanitarian duty and we must take it seriously and do whatever in our power to protect them from the scourge of wars and conflicts.”