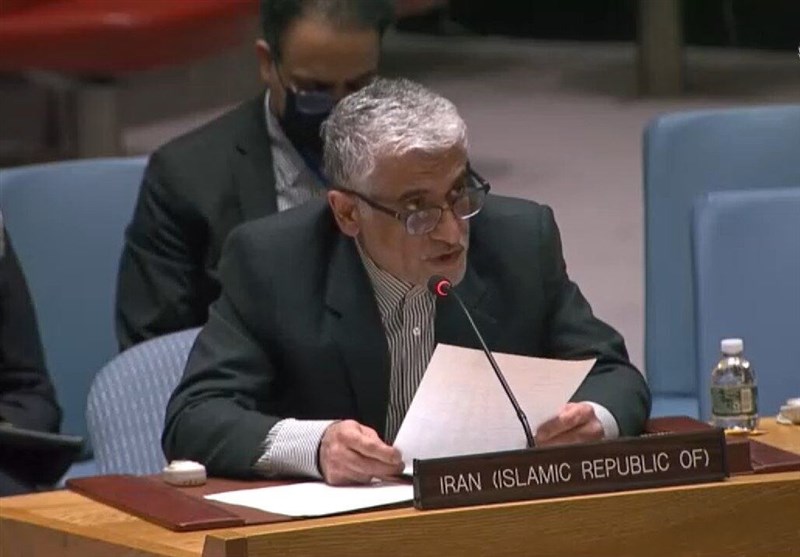 TEHRAN (Tasnim) – Expressing Iran’s readiness to resume the Vienna talks on the revival of the 2015 nuclear deal and the removal of sanctions, the Iranian ambassador to the UN said the onus is on the US to show genuine political will and stand ready to work towards a satisfying solution.

In an address to a meeting of the United Nations Security Council on “Non-Proliferation: Implementation of Security Council Resolution 2231 (2015)”, held in New York on December 19, Saeed Iravani reiterated Iran’s commitment to dialogue and diplomacy.

“We are ready to resume the Vienna talks, to work cooperatively to reach an agreeable solution, and even to arrange the ministerial meeting as soon as possible to declare the JCPOA’s restoration. This is achievable if the US demonstrates genuine political will and stands ready to work towards a satisfying solution and agrees to fully comply with its obligations. The US now has the ball in its court. It must show that it is honest, trustworthy, and capable of keeping its words. The time for action is now,” he said.

What follows is the full text of the Iranian ambassador’s speech:

I thank India for this meeting. I also thank the briefers for their briefings.

Today, as expected, the Council members once again expressed their support for the JCPOA’s restoration and called for its full implementation as the only viable course of action.

Obviously, the JCPOA can only be restored by addressing the root causes of its current situation, that is the US withdrawal therefrom on 8 May 2018.

Furthermore, as a permanent member of this Council, the United States brazenly forced all other UN Member States to either violate Resolution 2231 or face punishments. This is unprecedented in the history of the United Nations.

Despite the change in the US administration in 2021, the country’s maximum pressure policy has remained unchanged. Even though consistently admitting the policy’s failure, the current administration continues to implement it more extensively and harshly. It should also be noted that the E3 continues to fully support and enforce such US sanctions and policies. They, like the United States, are failing to meet their obligations under the JCPOA.

Iran’s full compliance with all its nuclear-related commitments under the JCPOA, even one year following the US withdrawal from the accord, is well documented. It has been verified by the IAEA and reflected in 15 consecutive reports of its Director-General.

However, we reacted to the US withdrawal from the JCPOA and its significant non-compliance with its commitments under the deal, as well as a flagrant violation of Resolution 2231, only after one year of strategic patience. At the same time, the acts we took were certain remedial measures based on our rights, as plainly mentioned in JCPOA articles 26 and 27. Our objective was simple: to restore some balance in reciprocal commitments and benefits under the agreement. This was important since the JCPOA is based on Iran’s nuclear-related commitments in exchange for the lifting of all UN, US, and EU sanctions against Iran and the removal of all hurdles to Iran’s international economic, commercial, and financial cooperation.

Against that backdrop, today, I will address four issues: first, the ongoing political process for the JCPOA’s revival; second, technical cooperation between Iran and the IAEA; third, our position on the Secretary-General’s report; and fourth, our reply to accusations against my country, made today by certain Council members.

The Vienna talks commenced with the US expressing willingness to return to the JCPOA and reverse its failing Maximum Pressure Policy. Iran has always shown good faith and taken a constructive approach during the talks. The negotiations were going well, and constant efforts were being made. Iran’s negotiating team exercised maximum flexibility in order to reach an agreement acceptable to all. To that end, our team even introduced innovative solutions to the remaining issues to break the impasse. However, the United States’ unrealistic and rigid approach has led to the current situation.

Contrary to baseless assertions that Iran has raised issues unrelated to the JCPOA, I can assure you that Iran has not brought up any matters outside of the framework of the Vienna talks and the JCPOA.

The other parties, especially the United States, decided to withdraw from the negotiation table and send contrasting, ambiguous, and paradoxical messages about negotiations. Instead, the US and E3 chose to focus on what it has been doing for decades: interfering in Iran’s internal affairs, including by supporting terrorist groups in their villainous attempts to jeopardize the security of the Iranian people.

Let’s make it clear, pressure, intimidation, and confrontation are not solutions, and will lead nowhere. If the US genuinely wants the JCPOA’s revival, it must rely on only diplomacy.

For its part, Iran reiterates its commitment to dialogue and diplomacy. We are ready to resume the Vienna talks, to work cooperatively to reach an agreeable solution, and even to arrange the ministerial meeting as soon as possible to declare the JCPOA’s restoration. This is achievable if the US demonstrates genuine political will and stands ready to work towards a satisfying solution and agrees to fully comply with its obligations. The US now has the ball in its court. It must show that it is honest, trustworthy, and capable of keeping its words. The time for action is now.

Regarding our technical cooperation with the IAEA, I must stress that this issue is entirely outside the purview of Resolution 2231. However, when certain Members of the Council made unsubstantiated allegations and accused Iran of non-compliance, I would like to emphasize that all of our nuclear activities are peaceful and consistent with our rights and obligations under the NPT and our Safeguards Agreement.

According to the IAEA, Iran’s peaceful nuclear program has been under the most robust and intrusive nuclear verification, monitoring, and transparency measures ever conducted in a country in the IAEA’s history. It has continued to uphold its commitments and cooperated fully with the Agency in order to maintain its continuity of knowledge regarding Iran’s peaceful nuclear activities. The Joint Statement of the IAEA and Atomic Energy Organization of Iran, on 5 March 2022, is the latest example of such cooperation.

Iran’s current remedial measures, including in connection with the surveillance equipment beyond its Safeguards Agreement and the robust verification system would be reversed only if the illegitimate sanctions are lifted and current safeguards-related issues are addressed and terminated. The Agency’s impartiality, independence, and professionalism should never be jeopardized nor influenced by certain parties.

We consider the recent resolution of the IAEA Board of Governors a political action. Iran has fulfilled its responsibilities under its Safeguards Agreement. We stand ready to engage with the Agency to resolve the existing outstanding safeguards-related issues. We hope that the IAEA team’s visit to Tehran will further efforts to address such issues.

While our full observations on the Secretary-General’s report on resolution 2231 are contained in my letter dated 15 December 2022 to him (S/2022/962), I would like to make a few comments.

Contrary to the Secretariat’s assertion, the scope of the report must include the resolution in its entirety, not only its Annex B. This is not Iran’s interpretation; it is the precise language of paragraph 7 of Note S/2016/44 by the Council’s President.

Furthermore, the report contains issues that have nothing to do with resolution 2231. Similarly, it has once again failed to address the root causes of the current situation around the JCPOA, namely, the US withdrawal from the deal. The report is especially silent on the US and E3’s systematic material breach of their explicit legal obligations under Resolution 2231.

Moreover, the Secretariat’s engagement in the so-called “investigation” to purportedly “examine” the alleged violations of the resolution is clearly beyond the mandate entrusted to it by the Council through resolution 2231 and Note S/2016/44 by the Council’s President. According to these two documents, the Secretariat has no mandate whatsoever on the implementation of resolution 2231 other than providing “administrative support” for the Security Council’s work. Therefore, these ultra vires activities by the Secretariat are unacceptable and shall be avoided, and any possible findings or assessments based on such activities are null and void.

I must again reiterate our consistent position that Iran’s space and missile programs, fall outside the purview or competence of resolution 2231.

In conclusion, I would like to address unfounded allegations that Iran transferred UAVs to Russia in alleged violation of resolution 2231.

First, arms-related restrictions under resolution 2231 have been terminated on 18 October 2020, and since then, the transfer of arms to or from Iran is no longer covered by resolution 2231.

Accordingly, Iran has not transferred to Russia, any item that is covered by paragraph 4 (a) of Annex B to resolution 2231, and any claim to the contrary is unfounded and is hereby rejected. It is also worth noting that we have already engaged in bilateral talks with Ukraine to clarify the existing misunderstandings on the subject.

Therefore, the misinformation campaign and baseless accusations leveled against Iran must end. These attempts serve no purpose other than to divert attention from the Western States’ transfer of massive amounts of advanced sophisticated weaponry to Ukraine in order to prolong the conflict.

Finally, we reject making artificial linkages between regional issues and resolution 2231. However, in response to certain claims about our regional policy, I must reiterate that Iran’s foreign policy is based on full respect for international law, mutual respect, good neighborliness, cooperation, and dialogue, as well as maintaining regional peace and security through the active participation of all regional States. As in the past, we stand ready to engage actively and constructively with the regional States.

Let me reiterate once again that we are willing to restart the Vienna talks as soon as possible in order to finalize the existing text that will allow all parties to return to full compliance with their obligations under the deal.

I thank you, Madam President.