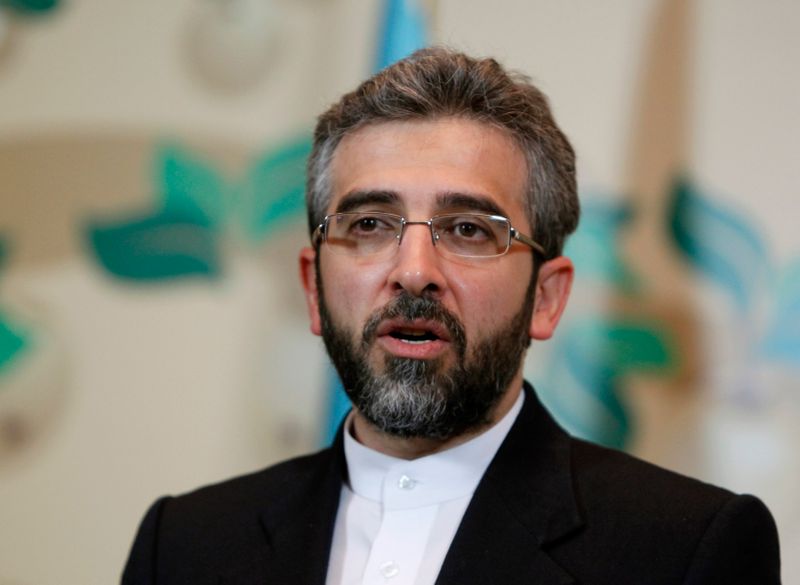 Bagheri, a hardline senior diplomat, was named on Tuesday to replace Abbas Araqchi, a seasoned pragmatist diplomat and chief negotiator in the negotiations that Tehran hopes will lead to a lifting of U.S. sanctions.

“Kani is an extension of the hardline deep state that is now in charge across all institutions in Iran and can more readily negotiate with the West as he is not just representing the government but has the empowerment of the inner circle,” said Andreas Krieg, associate professor at the School of Security at King’s College in London.

“It (the U.S. withdrawal from Afghanistan) has given the regime in Tehran more confidence in their regional surrogate warfare approach while showing that the U.S. is on the backfoot in the region.”

Iran has alarmed Washington and its Gulf Arab allies by relying on proxies in Iraq, Yemen and Lebanon, to steadily spread its influence across the Middle East.

Bagheri, who was named deputy foreign minister for political affairs, had been a senior negotiator in the nuclear talks under former hardline President Mahmoud Ahmadinejad from 2007 to 2013. He is a relative of Supreme Leader Ayatollah Ali Khamenei.

Iran’s parliament in late August approved all but one of President Ebrahim Raisi’s big-name nominees for a cabinet of hardliners that will have the task of implementing his plans to ease U.S. sanctions and tackle worsening economic hardship.

Indirect talks between Iran and the United States stopped in June, days after Raisi was elected president of Iran. U.S. Secretary of State Antony Blinken last week said time was running out for Iran to return to the nuclear accord.

An official involved in the talks said Iran’s enrichment with large numbers of advanced centrifuges is an unresolved issue, as is Iran’s demand that it “verify” U.S. compliance before curbing its nuclear program.

This official said verification meant the easing of U.S. sanctions, Iran’s export of some of oil and its payment through an international bank before Tehran would take steps to make its program less capable of being used to make nuclear weapons

Western powers on Monday scrapped plans for a resolution criticising Iran at the U.N. atomic watchdog after Tehran agreed to prolong monitoring of some nuclear activities, even though the watchdog said Iran made no “promise” on another key issue.

During a last-minute visit to Tehran this weekend by IAEA chief Rafael Grossi, Iran agreed to grant his agency overdue access to its equipment in Iran that monitors some sensitive areas of its nuclear programme. Inspectors will swap out memory cards more than two weeks after they were due to be replaced. Grossi said on Sunday that the agreement solved “the most urgent issue” between the IAEA and Iran.

He made clear on Monday, however, that on another source of concern – Iran’s failure to explain uranium traces found at several old but undeclared sites – he had obtained no firm commitments.

Nicki Siamaki, analyst at Control Risks, said Bagheri’s appointment, particularly if he replaces Araqchi as chief nuclear negotiator, could prolong the process of reaching a deal with the United States as his masters would raise the stakes to reach a deal they see meets their conditions.

The 2015 nuclear agreement imposed restrictions on Iran’s nuclear activities in return for the lifting of international sanctions against Tehran.

Then-President Donald Trump pulled the United States out of the deal in 2018, re-imposing tough economic sanctions on Iran. Tehran responded as of a year later by breaching many of the agreement’s restrictions and later enriching uranium to purity levels much closer to weapons-grade.

Mohanad Hage Ali, fellow at the Malcolm H. Kerr Carnegie Middle East Center, said the Iranian narrative is to persevere with their demands and they will emerge victorious against a weakening United States.

Lebanon’s Iranian-backed Hezbollah paramilitary group, he said, has been using the images of people falling from a U.S. plane departing from Afghanistan to suggest that those who bet on U.S. power will suffer the same fate.

“The images from Kabul’s airport sent shockwaves, and have consequences,” he said.