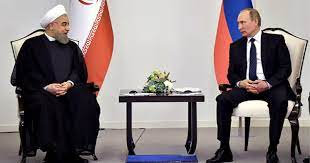 Share
Tweet
Share
Share
Email
Comments
Iran says it has concluded contracts for arms purchases with Russia, “Chief of the General Staff of the Iranian Armed Forces Mohammad Hossein Bagheri said [that the contracts had been concluded] at a meeting with Russian Navy Deputy Commander-in-Chief Vice Admiral Vladimir Kasatonov in St. Petersburg on Wednesday,” according to Tass media in Russia.
“The conclusion of arms agreements and their implementation in the near future will considerably deepen our relationships,” the IRIB television and radio broadcasting corporation quoted the Iranian military chief as saying.
This is a new milestone in Iran-Russia relations. “The chief of the Iranian General staff also visited the Russian Navy’s headquarters in St. Petersburg and military facilities in Kronshtadt,” IRIB reported. Bagheri is in Russia for a four-day visit and he has met with Russian Defense Minister Sergei Shoigu and talks with Chief of the Russian General Staff Valery Gerasimov, the reports say.
ran desperately needs to modernize its army, navy and air force. It recently sent ships around Africa bypassing the Suez Canal to reach Russia.
Meanwhile, Moscow has complained about a recent terror attack in Damascus. Moscow backs the Syrian regime. In recent days the Syrian regime has made progress in Gulf ties and other networking in the Middle East.

Iranian media says that Iran has agreed to a new cooperation with Russia. This is important because there was already one joint naval drill with Russia and China in the past. Now there could be more.
Iran’s navy needs new ships and submarines. Its navy has suffered many setbacks recently, including one ship that caught fire and sank.
It remains to be seen if the recent discussions in Moscow will in fact lead to major deals. Iran doesn’t have a lot of cash and Russia is in a crisis related to Covid and is busy trying to integrate a new defense plan with Belarus and also confront NATO.
RSS Feed by jpost.com