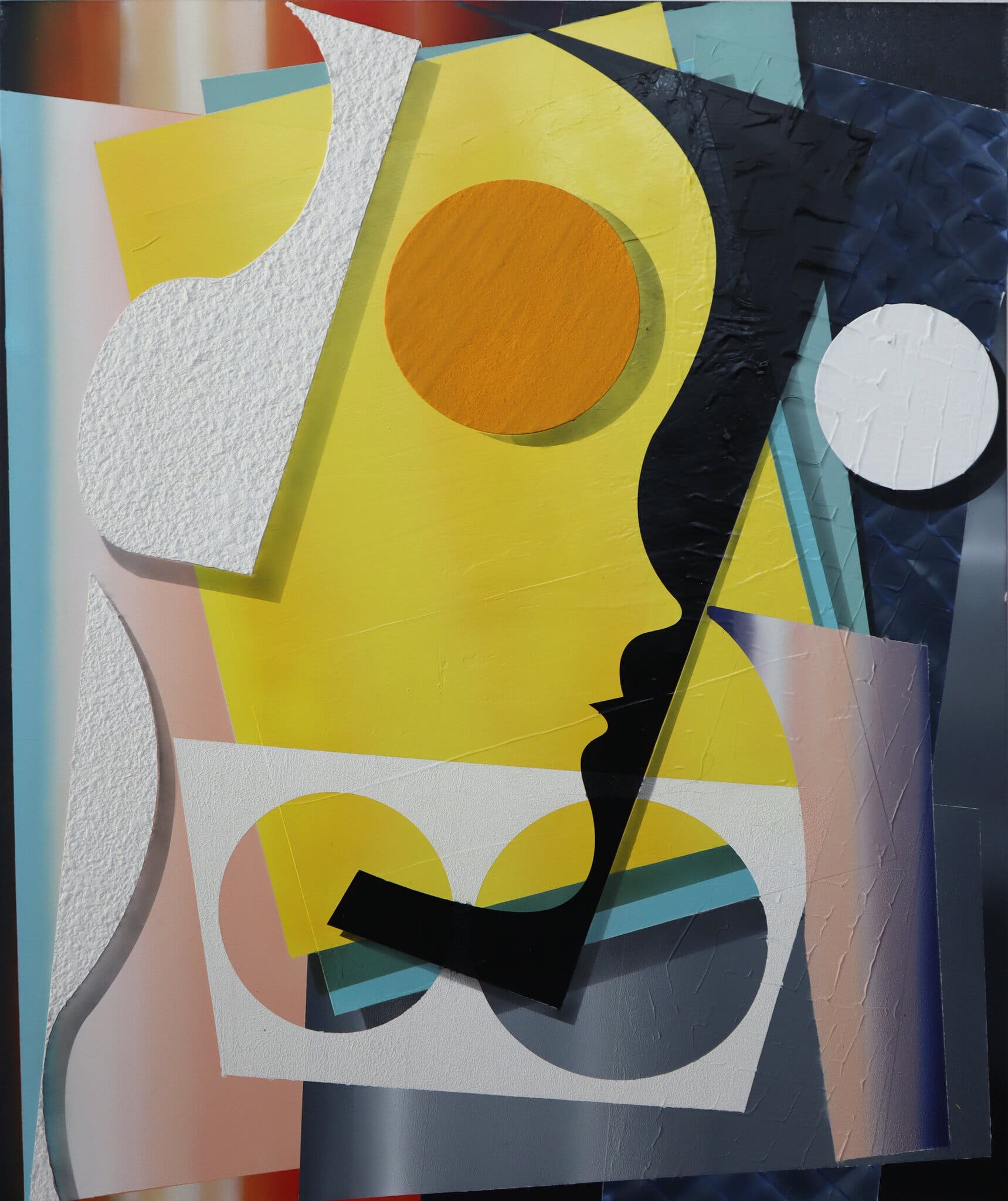 PARIS — Asia Now, a fair dedicated to contemporary Asian art, will be a bit different this year.

The usual list of galleries from China, Japan and Korea is conspicuously thin, so the fair has expanded its scope to bring a selection of Iran’s contemporary art galleries to a dedicated platform called “Tehran Now.”

“We explore the richness of the art scenes from the Asian continent, and it was important that we looked at art from Iran,” said Alexandra Fain, co-founder and president of Asia Now.

This fair counts 40 participants in an in-person format that runs through Sunday in its usual venue, the Salons Hoche, a mansion on the Avenue Hoche a few blocks from the Arc de Triomphe in Paris’s Eighth Arrondissement. An online viewing room is available.

Besides those from Iran, many European galleries and two art foundations are filling the booths to show art by artists from, or with a connection to, the Asian continent.

Three important Paris-based galleries are back — Perrotin, Templon and Nathalie Obadia. They came on board for the first time last year, when FIAC was canceled because of the pandemic. This year, they have booths at both Asia Now and FIAC.

Templon is showing new works by Indian artists, including Jitish Kallat and Atul Dodiya, who were both featured at the 2019 Venice Biennale. Perrotin has tapestries handmade in Nepal based on designs by the Japanese artist Aya Takano; Nathalie Obadia has a cross-cultural show of Indian, Chinese and Iranian art. Because Chinese travelers face the prospect of quarantine — if not in Europe, at least upon their return — many Chinese galleries have stayed away. Among the Asian galleries participating are Yavuz, from Singapore, and two from China, HdM and Over the Influence, which operate spaces in London and Los Angeles, respectively.

Asia Now has partnered with the Musée National des Arts Asiatiques Guimet, nearby in the 16th Arrondissement, where two off-site shows of Paris-based Vietnamese artists, Thu-Van Tran and Huong Dodinh, may also be viewed.

“This is our seventh edition, and we have reached a maturity accelerated by the health crisis,” Ms. Fain said.

That maturity, she said, shows in the fair’s “engagement with social and environmental issues” and its full program of round-table discussions, musical performances and special projects, all seeking to raise public consciousness through art.

One project, “Making Worlds Exist,” a selection of works curated by Kathy Alliou, director of the “Oeuvres” department at the Beaux-Arts de Paris, questions identity, regeneration and tradition through the eyes of nine artists. Another, curated by the historian and art critic Nicolas Bourriaud, explores the Chinese concept of “Shun” (“to go with the flow”) and the divide between nature and industry.

A third project opens the door to the Iranian platform. Titled “Burning Wings,” it is a 70-minute video projection compiled by Odile Burluraux, a curator at the Musée d’Art Moderne de Paris. It is dedicated to the Iranian poet and writer Forough Farrokhzad, a symbol of artistic and personal freedom in Iran who died in 1967.

It is a single projection made up of several three- to 10-minute videos made by 10 female artists from Iran. A verse from one of Ms. Farrokhzad’s poems sets the tone for “Burning Wings”: “Do not seal my lips with the padlock of silence, for I have an untold story in my heart.”

“These are personal histories told by women, some with subtlety and poetry, others in more radical ways,” Ms. Burluraux said.

“These women are repositories of a collective memory,” she said.

“A sense of nostalgia for Iran’s landscapes, its tradition and its architecture, and a powerful evocation of places left behind runs through their work.”

One of the artists featured in “Burning Wings” is Tahmineh Monzavi, who lives in Iran and often tackles issues relating to women and marginalized populations including addicts and transgender people. She is showing three videos,:“Dance in the Ruins,” “Secret of Dismissal,” and “Lullabies” from her “Past Continues” series (2016), each featuring a woman singing, dancing or playing the cello in the ruins of a formerly grand building.

“Tehran Now” is presented in a space staged by the Tehran-based graphic artists of Studio Kargah to evoke the sinuous, shop-filled labyrinths of Tehran’s Grand Bazaar.

Iranian artists are rarely the primary focus of a Western art fair. For artists living in Iran, their exposure is largely regional, if not local, in part because of sanctions that have been imposed on the country, compounded by the impact of the pandemic.

“Artists working in Iran have largely been cut off from the Western world for 40 years,” said Jean-Marc Decrop, a specialist in Chinese contemporary art and a member of the fair’s artistic committee.

“Iran’s culture dates back millennia and filters through all levels of society,” Mr. Decrop said. “Poetry informs the work of many artists from Iran who interpret today’s world from a unique perspective.”

They are showing works by some 60 Iranian artists, including seminal pieces by Farideh Lashai, who died in 2013, and what Mr. Decrop called “fresh and surrealistic” new work by Hoda Kashiha. In the Etemad booth, Maryam “Mimi” Amini, a Tehran-based multidisciplinary artist, has several mixed-media pieces from her colorful, soul-searching “Hidden Landscape” series that combine gold leaf and collage on wood and industrial fabric.

Ab-Anbar gallery is showing digital prints by Arash Hanaei based on an actual photograph of a landscape or a still life, color-saturated to suggest a suspended reality.

The human form, deconstructed and sometimes cartoonish, is the subject of works by Ms. Kashiha, a Tehran-based artist presented by Galerie Nathalie Obadia, which is also showing works by Shahpour Pouyan.

“I like airbrushing for the flatness effect, but my pieces have many superimposed layers,” Ms. Kashiha said in an interview from Tehran. “The airbrush puts a tool between me and the canvas. It removes ego from the painting process. It is a more feminine way to paint.”

“For me, this fair is not about selling my work,” she said. “I want people to see it and talk about it.”

“The Secret” by Sepand Danesh, a Franco-Iranian artist based in Paris, is also cartoonish but in a pixelized style of painting. Inspired by Giotto’s “Annunciation to the Virgin,” the work is presented by Nouchine Pahlevan, a gallery that opened last month in Paris’s Marais neighborhood.

“My inspiration comes from curiosity, which in Persian is ‘konj-kav,’ and literally means ‘to dig into the corner,’” Mr. Danesh said. “My fragmented figures are trapped in a corner and looking to escape.”

Mr. Danesh is also a sculptor. He was commissioned to create 25 outdoor sculptures, with the same “digital” quality as his paintings and some usable as public benches, for the French Pavilion at Expo 2020 Dubai, which opened this month.

“When you look at my work, it is not Iranian per se, but it has something of my personal story,” Mr. Danesh said. “Nationality is important, but I would rather people looked at the art and what the artist has to say.”