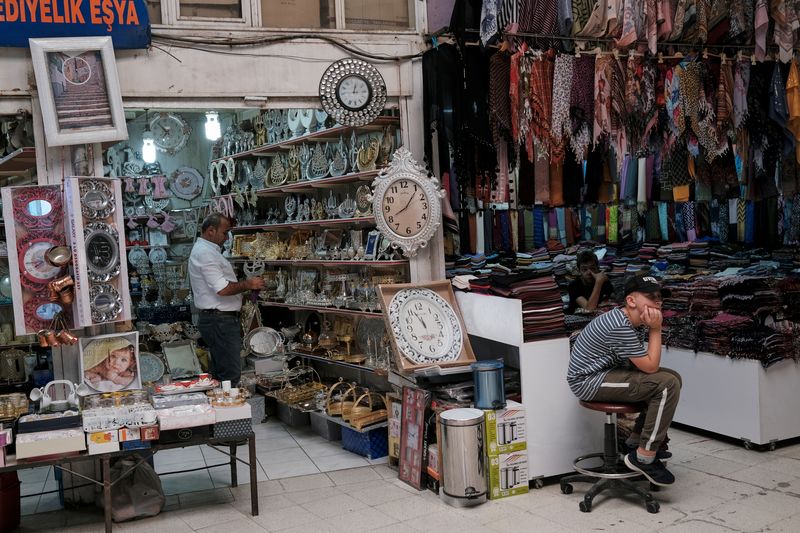 FILE PHOTO: Merchants wait for customers at a bazaar in the border city of Van, Turkey August 24, 2021. REUTERS/Murad Sezer

VAN, Turkey (Reuters) – Ramazan Baran waits outside a teahouse in Turkey’s eastern province of Van from early morning to nightfall to find work in construction but says he has been losing out to Afghan migrants willing to work for less money.

Around 15 other men sitting with him faced the same difficulty, he said. “Migrants haven’t left a job for us. We cannot get by. Our people are hungry.”

As Turkey braces for a possible influx of refugees fleeing Afghanistan following the Taliban takeover, concern over the potential impact is growing – fuelled by festering resentment over refugees already sheltering in the country.

Officials say around 300,000 Afghans are also currently in Turkey – some have been there for several years. They include an estimated 120,000 unregistered people, although the opposition say the number is far higher. Gravestones for those who have died after crossing the border scatter a cemetery in the city.

While President Tayyip Erdogan and his AK Party have defended accepting millions of Syrians who fled conflict in their country, they have said a new wave would not be welcome.

“Turkey … cannot handle another burden of migration stemming from Syria or Afghanistan,” Erdogan said on Wednesday. He has also warned EU leaders that Turkey will not be a “migrant storage unit” for Afghans trying to reach Europe.

More Afghans are already arriving. Officials have not given details of how many a day, but say they have not yet seen signs of a major surge since the Taliban’s victory – although the long distances through Iran mean migrants could take weeks to arrive.

Baran was one of around 20 people in Van who said that Turkey should stop accepting migrants and send back people already in the country.

In the capital Ankara this month a crowd of Turks attacked shops and homes belonging to Syrians in the wake of a fight that led to a Turkish youth being fatally stabbed.

Most of those who spoke to Reuters in Van said migrants were damaging the economy, while locals have to cope with inflation and unemployment in double figures.

Authorities have reinforced the border with Iran to keep Afghan migrants out, but some still slip through. Police have also detained thousands of Afghan migrants already in the country in recent weeks.

They are taken to repatriation centres but they are currently not being sent back due to the turmoil in Afghanistan.

“If the government took necessary measures, there wouldn’t be migration,” said 54-year-old Mehmet Serif Karatas, speaking outside a textile shop in Van, a transit point for most Afghans crossing into Turkey.

CHP leader Kemal Kilicdaroglu said that the West may try to make a new deal with Turkey in return for money, similar to Turkey’s 2016 agreement with the European Union to stem the flow of migrants to Europe in return for billions of euros for refugee projects.

“How did … thousands of Afghans cross the border and come to Turkey, and who allowed it? We have to blame the ones who allow it,” Kilicdaroglu said on Wednesday. “They are doing this for money.”

Selami Kiye, a 48-year-old shopkeeper in Van’s Russian Bazaar, said Europe or other countries should take in the migrants. “Let them go elsewhere. We don’t care about them,” Kiye said.