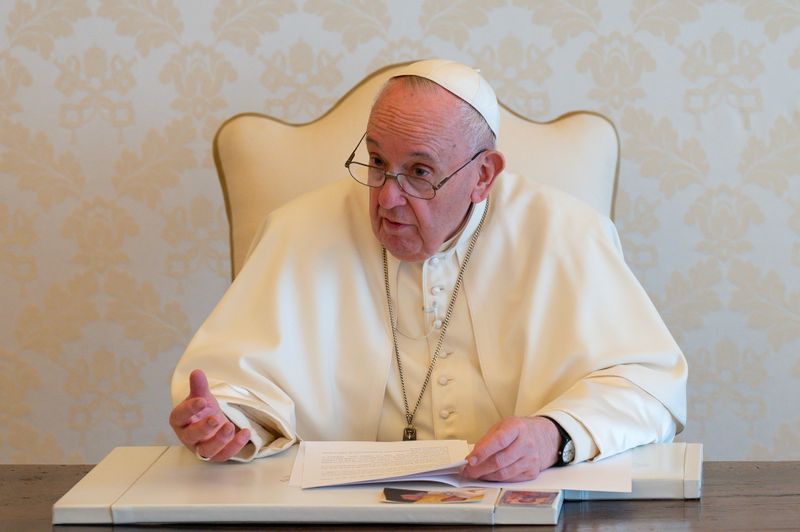 Pope Francis delivers a video message on the occasion of Earth Day, at the Vatican, April 22, 2021. Vatican Media/­Handout via REUTERS

VATICAN CITY (Reuters) – Pope Francis said in his Earth Day message on Thursday that the planet was “at the brink” and humanity had to avoid “the path of self destruction.”

The pope, who has issued many appeals for environmental protection since his election in 2013, spoke in two video messages, one for the Earth Day Live internet event and another for a global climate summit hosted by U.S. President Joe Biden.

“Now is the time to act. We are at the brink,” Francis, who has backed the scientific consensus that global warming is partly man-made, said in the Earth Day message.

He cited the Covid-19 pandemic coupled with the effects of climate change and said nature could not continue to be disrespected, because it would “no longer forgive.”

“When the destruction of nature is sparked, it is difficult to stop. But we are still in time and we will be more resilient if we work together instead of alone,” he said.

“You do not exit from the crisis the same, we will either exit better or worse. That is the challenge, and if we don’t exit better, we will take the path of self-destruction,” he said.

He said now was the time for innovation and invention and urged political leaders to act with courage and justice.

In the message to the event hosted by Biden, at which the United States and other countries hiked their targets for slashing greenhouse gas emissions, Francis said people had “to care for nature so that it cares for us”.

The event hosted by Biden, which Francis called a “wonderful” initiative, was meant to resurrect U.S. leadership in the fight against global warming.

The pope criticised former U.S President Donald Trump when he withdrew the United States from the 2015 Paris accord to limit global warming. The Vatican has welcomed Washington’s return to the accord.