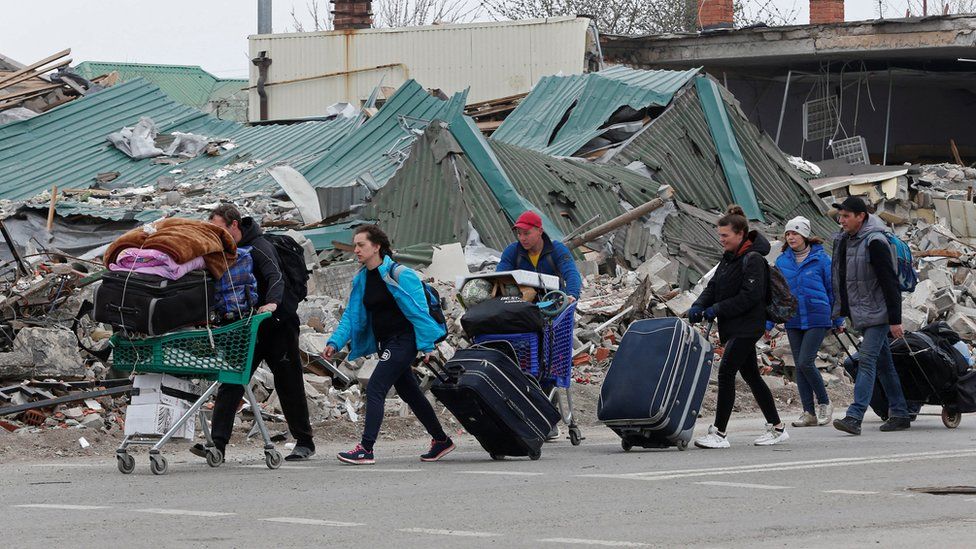 More than 11 million people are believed to have fled their homes in Ukraine since the conflict began, according to the United Nations.

As well as the 5.1 million who have left for neighbouring countries, another 6.5 million people are thought to be displaced inside the war-torn country itself.

Where are people fleeing inside Ukraine?

Ukraine’s Deputy Prime Minister, Iryna Vereshchuk, warned people in the east of the country to evacuate ahead of the latest Russian assault, or risk their life.

How many were able to leave is unknown.

He said the government hoped to send 90 buses to evacuate about 6,000 people.

The UN’s 6.5 million figure is based on research carried out by the International Organisation for Migration (IOM) between 9 and 16 March.

The actual total is likely to have increased in the subsequent weeks.

Of the 2,000 internally displaced people the IOM surveyed:

The IOM estimates that more than half of the people who are internally displaced are women, and many are deemed particularly vulnerable because they are pregnant, have a disability or are a victim of violence.

What is being done for refugees within Ukraine?

The UN, which is working alongside other organisations to provide help to people in Ukraine, says it is offering humanitarian assistance “wherever necessary and possible”. This includes:

About 12 million people are also thought to be stranded or unable to leave areas affected by the fighting.

Where are Ukraine’s refugees going?

Refugees are also crossing to neighbouring countries to the west, mostly Poland.

The UN says that as of 21 April, more than 5.1 million people have left Ukraine:

Some people have travelled from Moldova into Romania and so are included in both countries’ totals.

Poland, Hungary and Slovakia are part of the Schengen area, where there are no internal border controls.

This means many of those counted when they initially crossed into these countries may have since travelled to other countries which do not .

For instance the Czech Republic’s interior ministry said that as of 21 April, it has granted 304,039 emergency visas to Ukrainian refugees.

How are refugees leaving Ukraine?

Trains heading towards Ukraine’s border have been packed, and there have been long queues of traffic on roads leading out of the country.

Refugees don’t need all their official documents, but it is helpful if they can provide provide identification cards or passports, birth certificates of children travelling with them and and medical documentation.

To get refugee status, they need to be Ukrainian citizens or people legally living in Ukraine, such as foreign students.

There have been reports of people from African countries being prevented from leaving Ukraine.

What help are countries offering refugees?

In countries bordering Ukraine, refugees can stay in reception centres if they can’t stay with friends or relatives. They are given food and medical care, and information about onward travel.

The EU has granted Ukrainians who flee the war a blanket right to stay and work throughout its 27 member nations for up to three years.

They will also receive social welfare and access to housing, medical treatment and schools.

The government of Poland, which has received the highest number of refugees, has said it will need more money than the EU is currently offering in order to host the number of people arriving there.

Moldova, which has the largest concentration of refugees per capita, has also appealed for international help in dealing with the numbers arriving.

What is the UK doing to help Ukrainian refugees?

The UK launched a family visa scheme for Ukrainians who have an immediate or extended family member in the UK.

After the government was criticised for the speed and scale of its response, it also launched the Homes for Ukraine scheme to allow those without relatives in the UK to settle here.

Under this scheme, people in the UK can nominate an individual or family to stay with them rent-free for at least six months.

Refugees who come via the scheme will be able to live and work in the UK for up to three years, and access healthcare, welfare and schools.

Applications are made online, and both hosts and refugees will be vetted. Hosts will receive £350 a month and there will be no cap on the numbers able to come to the UK.

However, some families who have applied to be sponsors have complained that the system is too slow and complicated.

Home Secretary Pritti Patel has apologised for the “frustrating” delays.