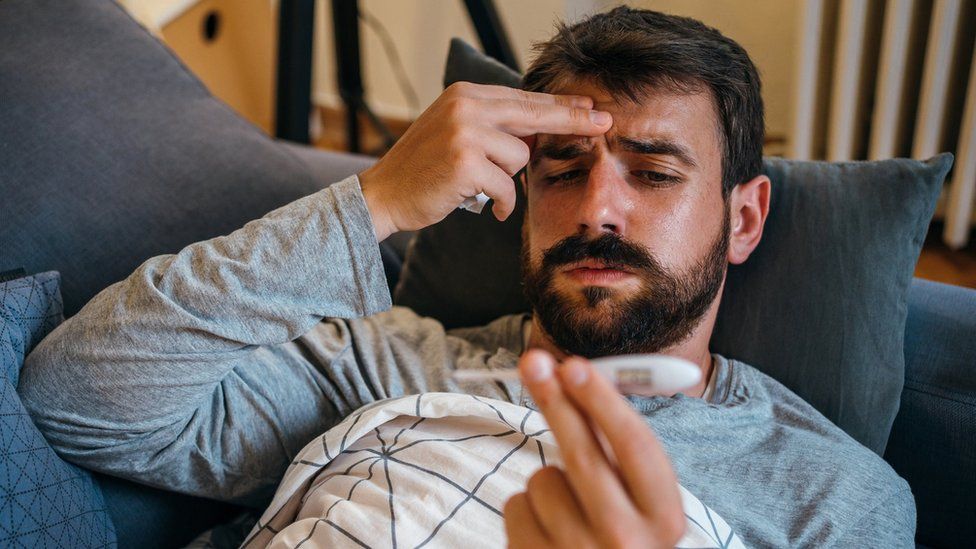 In the early days of the pandemic, it was extremely rare to hear of people catching Covid twice.

The Omicron variant which first emerged in late November 2021 has changed that.

Part of it is Omicron itself – it’s better at sneaking past defences built on exposure to older and different variants.

It’s also partly a numbers game. So many of us have already been infected at some point, that a rising proportion of new infections are a second occurrence.

But getting Covid twice in a short space of time is still pretty unlikely, despite the prevalence of the latest version of Omicron.

And for most people a second infection is less likely to make them very ill.

How likely are you to catch Covid twice?

Most people can expect to catch the other coronaviruses – such as those which cause common cold symptoms – many times.

Early in the pandemic, that didn’t seem to be the case with Covid.

Fewer than 1% of all cases recorded in the UK before November 2021 were reinfections.

But Omicron’s different structure gives it a better chance of sneaking past the body’s early defences, which were based on exposure to previous Covid strains.

So the rates of reinfection have been about 10 times higher this year compared with rates seen earlier in the pandemic.

How is the new version of Omicron different?

This new “Spring” Omicron – known as BA.2 – drove UK infections back up to record levels.

This had fallen again to about one in 17 by the week ending 16 April.

“Spring” Omicron is similar to – but even more infectious than – “Christmas” Omicron (BA.1).

If you’ve had Covid in the past few months, it’s likely to have been a version of Omicron, which in turn should give you good protection against a second bout.

The data we have so far suggest that a second Omicron infection is “rare, but can occur“. More reinfections have been seen among younger people and those who haven’t been vaccinated.

About 4.5 million people have had a Covid booster dose since the start of the year, with another two million getting their second dose.

And tens of millions of us have protection from a recent infection. About one in three of us caught Covid during the first Omicron wave.

Laboratory studies suggest that a combination of having had Omicron and being vaccinated could leave your body even better prepared to fight off a new infection than one infection alone.

How soon could I catch Covid again?

It’s been reported that a woman in Spain was infected twice, three weeks apart.

The 31-year-old healthcare worker started experiencing new symptoms, and genetic analysis of her positive tests showed that she had been infected by two different viruses – Delta in late December followed by Omicron in early January.

It’s hard to get good data on how often really early reinfections happen.

The vast majority of second positive tests within that little time are long-lasting infections rather than second infections.

So scientists don’t normally use genetic analysis to hunt for reinfections that early. It would cost a lot and mainly show that people “still had it” rather than “had it again”.

Studies, such as the one that says double-omicron infections are rare, typically start the clock ticking after three or five weeks.

Will the latest Omicron variant make me sicker?

So far, it seems that BA.2 is no more likely to put you in hospital than BA.1.

And even if you do test positive again, that “is not the same as being sick with Covid-19,” according to immunologist Prof Eleanor Riley. “It [just] means there is virus in your nose and throat.”

The protection provided by vaccination or having had a previous infection is better at stopping the virus from getting into your body and doing serious damage, than it is at keeping the virus out of your nose and throat.

Prof Riley thinks if you test positive again but feel well, “your main concern should be whether you might pass it on to someone who is particularly vulnerable”.

An infection can still land some people in hospital, particularly those with weakened immune systems or underlying health conditions.

But despite the high numbers of Covid infections, the current wave is putting fewer people in hospital than we saw in January, precisely because so many of us now have a combination of protection from vaccination and previous infections.

During January’s peak, about 55% of people in Covid beds in English hospitals were being treated mainly for their Covid. The most recent figures, for 5 April, say that figure is down below 45%.

And the total numbers of people in hospital with Covid are roughly half of what we saw in January 2021.

The government hopes the spring booster vaccine rollout will help top up immunity for the most vulnerable, and make it even harder for Omicron to cause serious illness, whether it strikes once or twice.