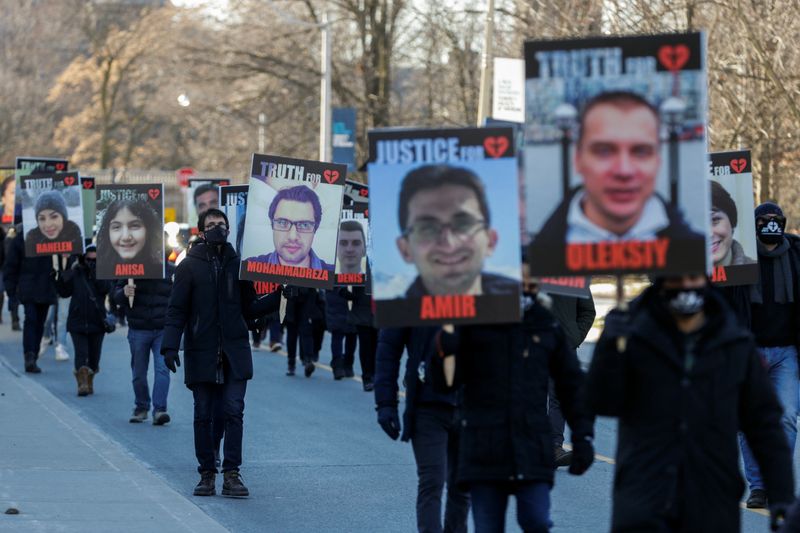 People hold placards with images of the victims of the downing of Ukraine International Airlines flight PS752, which was shot down near Tehran by Iran’s Revolutionary Guards, during a march to mark its first anniversary, in Toronto, Ontario, Canada January 8, 2021. REUTERS/Carlos Osorio

OTTAWA (Reuters) – Hackers on Tuesday interrupted a video briefing by lawyers for relatives of those who died when Iran shot down a Ukrainian airliner, playing clips of loud music and showing sometimes violent images for more than two minutes.

The lawyers ended the Zoom call and restarted it without further incident. The briefing was held after a Canadian court this week awarded C$107 million ($84 million) to the families of six people who died when Iranian Revolutionary Guards downed the jet near Tehran two years ago.

The interference started shortly after Mark Arnold, one of the lawyers, said “if anybody from the Islamic Republic of Iran is on this call … we’re coming after your assets.”

Images of a doll with sharp teeth and a dog with shining eyes then popped up on the screen, followed by a clip of a man singing a rap song with obscene lyrics and then repeated images of a man running towards a camera and pretending to kick it.

“I cannot speculate on who hijacked the call, but it was indeed interference,” Jonah Arnold, another lawyer on the call, said by email when asked whether he thought Iranian actors were responsible.

No one has claimed responsibility. The lawyers sent out a news release to the media with the dial-in details and password for the call.

Iran shot down the airliner in January 2020. All 176 people onboard were killed, including 55 Canadian citizens and 30 permanent residents.

The six family members awarded compensation by the court had filed a civil lawsuit against Iran and other officials they believe were to blame for the incident.

Iran admitted it shot down the airliner https://www.reuters.com/article/us-iran-crash-ukraine/iran-indicts-10-over-ukraine-plane-crash-prosecutor-says-canada-demands-justice-idUSKBN2BT120 shortly after takeoff from Tehran and blamed a “disastrous mistake” by forces on high alert during a confrontation with the United States.