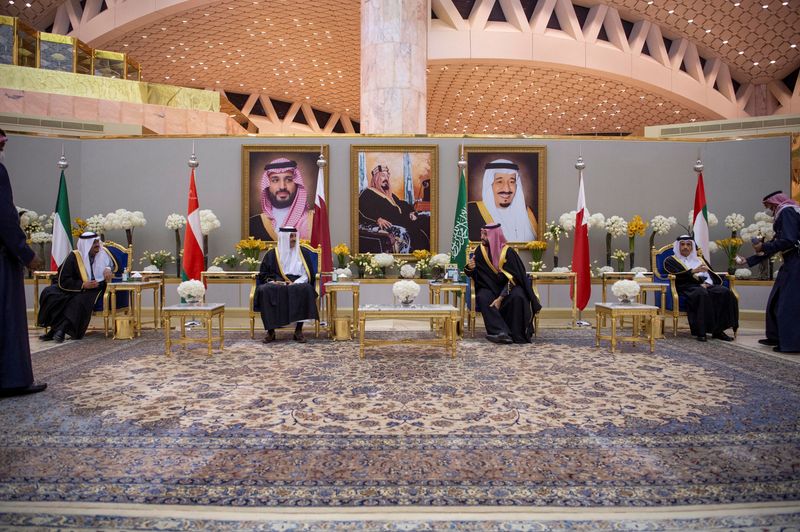 RIYADH (Reuters) – A Gulf Arab summit in Saudi Arabia urged Iran on Tuesday to take concrete steps to ease tension while reiterating a call to include the region in talks between global powers and Tehran aimed at salvaging their nuclear agreement.

Saudi Arabia’s crown prince had told the annual gathering of Gulf leaders before the final communique was issued that the nuclear and missile programmes of longstanding adversary Iran should be handled “seriously and effectively”.

Indirect talks between Iran and the United States to revive the 2015 nuclear pact started in April, but stopped in June after the election of hardline President Ebrahim Raisi. After a five-month hiatus, Iran’s negotiating team returned to Vienna with an uncompromising stance.

“So far the reports show there is some stalling by Iran and we hope this will turn to progress in the near future,” Saudi Foreign Minister Prince Faisal bin Farhan al-Saud told a press conference after the Gulf summit.

He said that while Gulf states prefer to be part of the talks they would be “open to any mechanism” that addresses their concerns, which also include Iran’s regional proxies.

Sunni Muslim Saudi Arabia and Shi’ite Iran are vying for influence in a rivalry that has played out across the region in events such as Yemen’s war and in Lebanon, where Iran-backed Hezbollah’s rising power has frayed Beirut’s Gulf ties.

Riyadh and the United Arab Emirates are both engaging with Iran in a bid to contain tensions at a time of deepening Gulf uncertainty over the U.S. role in the region, and as the oil producing states focus on economic growth.

Prince Faisal said the talks had seen no “real change on the ground” but that “we are open, we are willing”.

Iran’s president has said his foreign policy priority would be improving ties with Gulf neighbours.

The Saudi crown prince toured the Gulf in a show of solidarity ahead of the summit, which took place nearly a year after Riyadh put an end to a 3-1/2-year Arab boycott of Qatar.

Saudi Arabia and non-Gulf Egypt have restored diplomatic ties with Doha but the United Arab Emirates and Bahrain have yet to do so, though Abu Dhabi has moved to mend fences.

Saudi Arabia and the UAE have shifted away from hawkish foreign policies to a more conciliatory approach as they vie to lure foreign investment, and win over U.S. President Joe Biden.

The UAE has acted faster to improve ties with Iran and Turkey, while also re-engaging with Syria after forging relations with Israel last year.