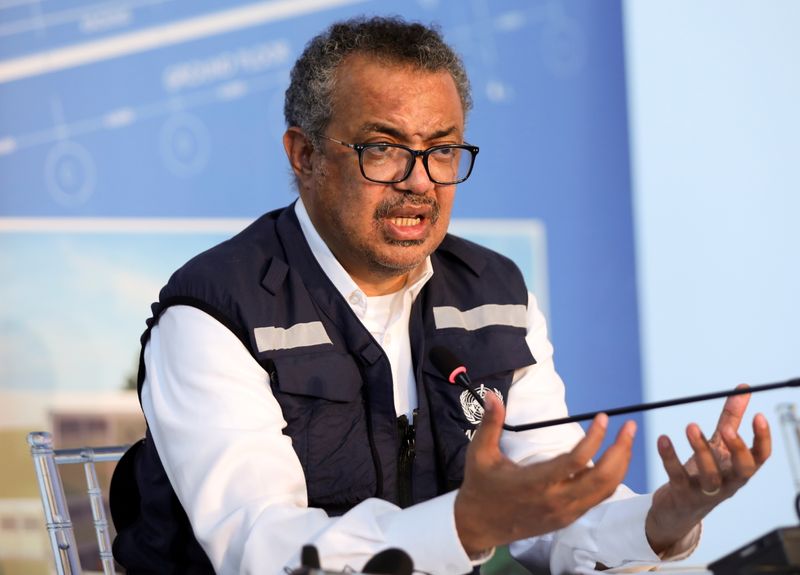 GENEVA/BERLIN (Reuters) – Germany is seeking support from other European Union members to ensure a second term for Tedros Adhanom Ghebreyesus at the helm of the World Health Organisation, but African states have yet to show their cards, government sources and diplomats said on Wednesday.

The deadline for proposing candidates in the politically charged race is Thursday at 1600 GMT and no other candidate for the election in May is known to have surfaced, they said.

Tedros, who was elected as WHO’s first African director-general in May 2017, has been shunned this time by his native Ethiopia due to friction over the Tigray conflict.

German Health Minister Jens Spahn backed a second term for Tedros on Tuesday and called on other countries to support the former Ethiopian health and foreign minister ahead of the deadline.

Government sources in Berlin made clear to Reuters on Wednesday it was now an official nomination.

“Right now an effort is going on, led by Germany, looking for other member states to join Germany in nominating him,” a Western diplomat said. “Germany won’t be alone.”

Tedros, who has been the public face of the global fight against the COVID-19 pandemic, has trodden a fine line while managing to anger both China and the United States at different times.

The Trump administration accused him of being “China-centric”, a charge he denies. But relations have improved since President Joe Biden took office and Tedros said in July that a second phase of studies into the origins of the coronavirus in China were needed, including audits of laboratories.

One African diplomat at the African Union said that, a day ahead of the deadline, the appointment of the new head of the WHO had not been discussed among member countries.

An African ambassador in Addis Ababa said that he was not aware of any member of the African Union preparing an alternative candidate. Most regional countries are keen to see him stay in the job, where he has promoted their access to COVID-19 vaccines and the start of vaccine production on the continent, he said.

A senior African diplomat based in Geneva said he did not expect any country in the African group to nominate Tedros as he did not enjoy Ethiopia’s backing.

African countries are expected to support Tedros’ re-election, however, and the senior diplomat was not aware of any other candidates from Africa or from another region.

“As a regional group it is always difficult when the home country doesn’t support its own national. It would be complicated for an African country other than his country of origin to take the initiative,” he told Reuters.