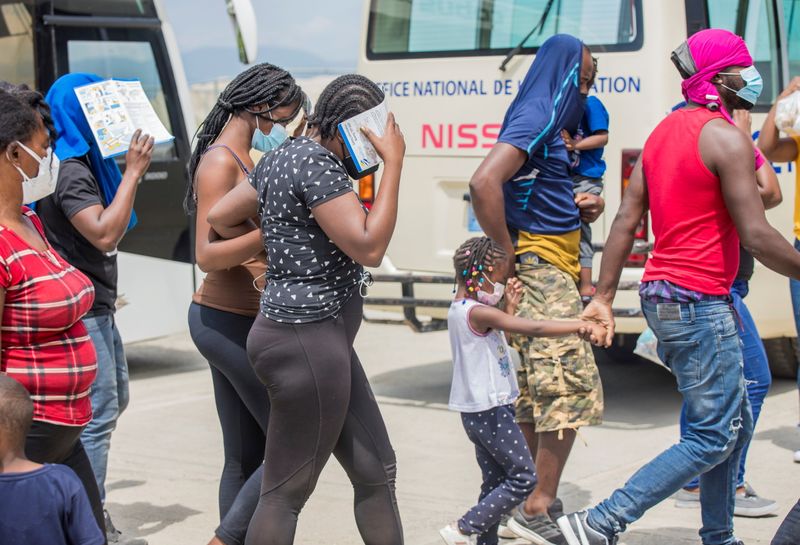 FILE PHOTO: Haitian migrants walk together after U.S. authorities flew them out of a Texas border city on Sunday where thousands of mostly Haitians had gathered under a bridge after crossing the Rio Grande river from Mexico, in Port-au-Prince, Haiti, September 19. REUTERS/Ralph Tedy Erol

By Mica Rosenberg and Kristina Cooke

NEW YORK (Reuters) – Confused and tired-looking toddlers clung to their parents at Port-au-Prince airport in Haiti on Tuesday, among the 360 family members rapidly expelled from the U.S. over the past three days.

These scenes came after U.S. border agents on horseback on Sunday used whip-like reins to block Haitian migrants wading across the Rio Grande with food and supplies from Mexico to a squalid encampment with nearly 10,000 people on the Texas side.

The images triggered anguish among some current U.S. officials interviewed by Reuters who said they once had high hopes that U.S. President Joe Biden would quickly reverse the hardline immigration policies of his Republican predecessor Donald Trump and, as he promised, “restore humanity and American values” to the immigration system.

Outside the government, disillusioned immigration advocates point to Biden’s refusal to repeal Trump’s most sweeping policy known as Title 42 – that allows border agents to quickly expel most migrants to Mexico or their home countries without a chance to apply for asylum.

Biden extended the March 2020 policy put in place by the U.S. Centers for Disease Control, arguing it remained necessary as a public health measure amid the COVID-19 pandemic.

“These deterrence (and) expulsion measures deny due process to asylum seekers and place them in harm’s way. That is a human rights violation,” Michael Knowles, president of AFGE Local 1924, the union that represents the asylum officers at U.S. Citizenship and Immigration Services (USCIS) told Reuters.

“Our members are outraged by the mistreatment of migrants and the refusal of our border authorities to allow them to have their asylum claims heard.”

Three other USCIS employees expressed similar concerns to Reuters, as did an official at another government agency.

Asylum officers interview migrants and refugees to determine if they need protection in the United States, while Border Patrol or Immigration and Customs Enforcement (ICE) agents oversee border security and detention.

Top Democratic lawmakers joined in the criticism https://www.reuters.com/world/americas/us-says-4000-haitian-migrants-moved-border-four-more-flights-come-mayorkas-2021-09-21. The dwindling goodwill among allies comes as Biden’s immigration agenda was dealt a blow on Sunday when the Senate https://www.reuters.com/world/us/senate-democrats-push-us-immigration-reform-hits-roadblock-2021-09-20 parliamentarian ruled Democratic proposals to give legal status to millions of immigrants in the United States could not be included in a budget reconciliation bill.

‘WHAT DO THEY BELIEVE IN?’

Biden did exempt unaccompanied children from Title 42 expulsions early in his presidency. But he has included families, even after a federal judge on Thursday ordered the government to stop expelling them. The administration is appealing the order.

A two-week stay on the order was “to allow the government time to organize itself,” said Lee Gelernt, the lead attorney from the American Civil Liberties Union suing the administration over the policy, “not to round up as many people as possible to expel them, and certainly not to expel desperate Haitian asylum seekers.”

The Trump administration argued many asylum claims were false and issued a flurry of policies to limit protections, moves that were often criticized by the USCIS’ union headed by Knowles.

One of the USCIS officials who spoke on condition of anonymity because they are not authorized to speak to the press said it was understood it would take time to roll back the Trump-era measures, but that some are now losing patience in the face of slow reform.

Another USCIS official spoke of being “personally mortified.”

USCIS referred a request for comment to the Department of Homeland Security (DHS), who did not immediately respond.

On Tuesday, DHS Secretary Alejandro Mayorkas said Title 42 was being applied to the fullest extent possible, while at the same time condemning the actions of the agents on horseback saying the incident was being investigated and those involved had been assigned administrative duties.

As Biden is facing criticism from the left, Republicans say he has encouraged illegal migration by moving too fast to reverse other Trump-era immigration reforms.

In recent months, the number of crossings at the U.S.-Mexico border increased to 20-year highs with close to 200,000 encounters in August alone, according to U.S. Customs and Border Protection data, though that is counting individuals who may have crossed multiple times.

Early in his presidency, Biden took several executive actions cheered by immigration groups – such as ending Trump’s travel bans on several Muslim-majority countries and scrapping a policy that sent asylum seekers to wait in Mexico for U.S. court hearings. He also exempted unaccompanied minors from Title 42 expulsions and reduced the number of families being expelled.

In a letter to Congress, retired Border Patrol Chief Rodney Scott said Biden’s reversals created a crisis at the border and constituted “a national security threat.” Unlike the USCIS union, the unions representing border and ICE agents have been vocal Trump backers.

Earlier this year, Biden also extended deportation relief to around 150,000 Haitians already living in the United States with Temporary Protected Status, though the benefits do not apply to anyone who arrived after July 29.

Biden acknowledged conditions are dire in the Caribbean country that has long struggled with violence and recently suffered a presidential assassination and a major earthquake.