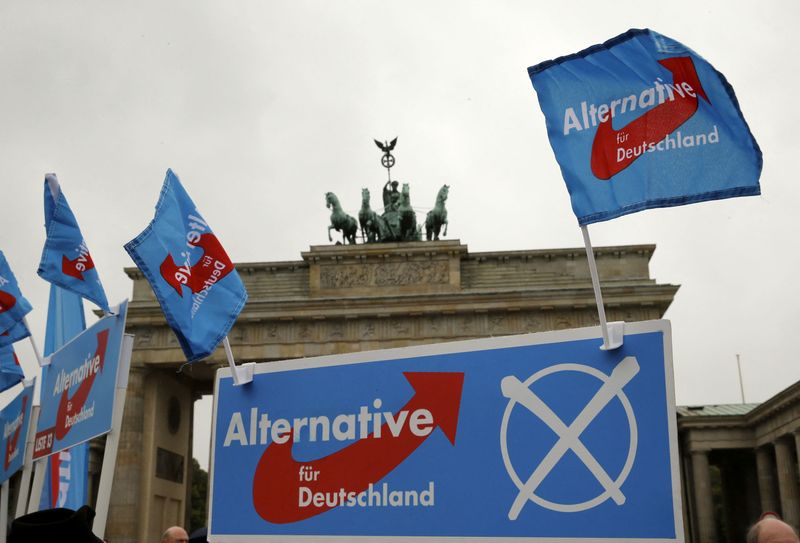 FILE PHOTO: Flags of the euro-critical Alternative for Germany AFD party are held up by supporters in front of the Brandenburg Gate during an AFD election campaign rally in Berlin September 16, 2013. German voters will go to the polls in a general election on September 22. REUTER REUTERS/Fabrizio Bensch

BERLIN (Reuters) – German police searched the homes of two politicians from the far-right Alternative for Germany (AfD) party, Der Spiegel magazine reported on Tuesday, part of a probe into messages in a Telegram chat group that reportedly called for revolution and civil war.

Police searched two residences in Bavaria and confiscated mobile phones as part of an investigation into the “Alternative Message Group Bavaria” on the Telegram messaging service, prosecutors said in a statement seen by Reuters.

The statement did not specify that the raids were on AfD politicians. The prosecutors’ office said it could not give further details at this time.

The two people whose homes were searched are believed to have made statements in the 200-member Telegram group in December 2020 and are suspected of public incitement, the statement said.

Neither Der Spiegel or the statement named the suspects.

Investigators still need to evaluate evidence to determine whether a criminal offence has been committed, the prosecutors said.

Broadcaster Bayerischer Rundfunk reported on Dec. 1 that 16 AfD members of the Bavarian state parliament and 11 AfD legislators from the Bundestag, the lower house of the federal parliament, had taken part in the chat, along with other politicians from the party.

The broadcaster said it had accessed the chat group.

According to the Bayerischer Rundfunk report, the chats were filled with fantasies about an outbreak of civil war, Islamophobia and criticism of the government’s coronavirus policy.

The AfD supports anti-migration and Eurosceptic policies and opposes COVID-19 restrictions such as government mask mandates.

In a separate case earlier this month, police in the eastern state of Saxony conducted a targeted search of members of a Telegram group as part of an investigation into what they said was a plot to murder the state’s premier.