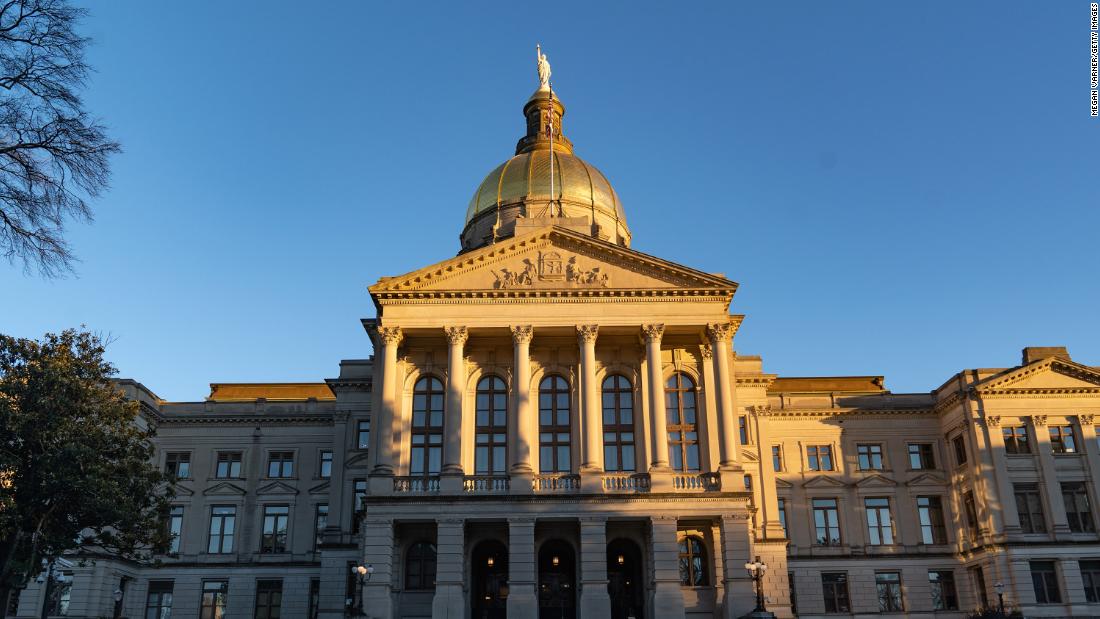 In a video posted to social media, a Georgia Capitol police officer speaks with the Democrat outside the door to Republican Gov. Brian Kemp’s office.
After knocking on the office door during Kemp’s signing of SB 202 — an election overhaul bill — Cannon is seen being led away by several officers with her hands cuffed behind her back.
In a statement Thursday night, Georgia State Patrol said that at 6:33 p.m., Cannon “was beating on the door to the Governor’s Office,” and, when told to stop, moved on to the Governor’s Ceremonial Office door marked with a “Governor’s Staff Only” sign and knocked on that door.
After being told twice to stop knocking on the door in light of the press conference occurring inside, and twice warned that she would be arrested if she did not stop, “Rep. Cannon refused to stop knocking on the door. Rep. Cannon was placed under arrest and escorted out of the Capitol,” according to the statement. She was taken to Fulton County Jail.
Cannon faces two felony charges — felony obstruction and preventing or disrupting general assembly session, according to an arrest affidavit seen by CNN. The affidavit states that Cannon was charged with disrupting General Assembly session because she “knowingly and intentionally did by knocking the governor’s door during session of singing [sic] a bill.”
The arrest affidavit for the felony obstruction charge said she “did knowingly and willfully hinder Officer E. Dorval and Officer G. Sanchez of the Capitol PD, a law enforcement officer in the lawful discharge or the officer’s official duties by Use of Threats of Violence, violence to the person of said officer by stomping on LT Langford foot three times during the apprehension and as she was being escorted out of the property. The accused continued on kicking LT Langford with her heels.”
Attorney Gerald Griggs told CNN he is representing Cannon. Griggs said he was at the Fulton County jail working to bond Cannon out after she was booked on felony obstruction charges.
“We are getting her out of jail currently. We are gathering information on the case as well. There are multiple videos and we are in contact with the DA,” Griggs told CNN.
In the video, others in the Capitol with Cannon can be heard asking officers, “Why are you arresting her?”
CNN has reached out to Kemp’s office for comment.
Cannon, who is Black, was Georgia’s youngest lawmaker at age 24 and one of three openly gay lawmakers when she was elected to the state House in 2016. She has opposed the state’s so-called “religious freedom bill,” on the grounds that it would lead to discrimination against gay and transgender people, as well as Georgia’s so-called heartbeat bill, which sought to ban abortions at the detection of a fetal heartbeat — occurring as early as six weeks into a pregnancy.
Cannon’s arrest comes after Kemp signing the sweeping elections bill into law Thursday made Georgia the first presidential battleground state to impose new voting restrictions following President Joe Biden’s victory there. The new law imposes new voter identification requirements for absentee ballots, empowers state officials to take over local elections boards, limits the use of ballot drop boxes and makes it a crime to approach voters in line to give them food and water.
Republicans cast the measure, dubbed The Election Integrity Act of 2021, as necessary to boost confidence in elections after the 2020 election saw former President Donald Trump make repeated, unsubstantiated claims of fraud. Kemp on Thursday predicted critics of the new law “will threaten, boycott, sue, demonize and team up with their friends in the national media to call me everything in the book.”
This story has been updated with additional details.