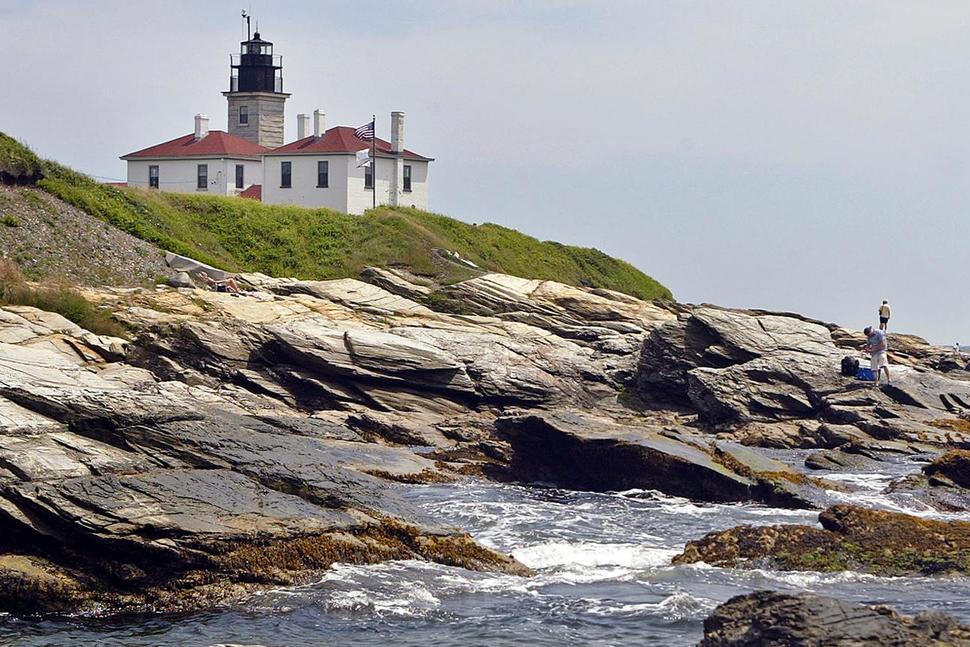 FILE – In this July 7, 2006, file photograph, fishermen cast on the rocky shore at the Beavertail Lighthouse, the third-oldest lighthouse in America, at the tip of Beavertail State Park, on Narragansett Bay, in Jamestown, R.I. The federal government’s General Services Administration announced the U.S. Coast Guard has decided it no longer needs four of the nation’s most storied and picturesque lighthouses, including the Beavertail Lighthouse. The government says it’ll make the historic lighthouses and their outbuildings available at no cost to federal, state and local agencies; nonprofit organizations; educational and community development agencies; or groups devoted to parks, recreation, culture, or historic preservation. (AP Photo/Stew Milne, File) THE ASSOCIATED PRESS

PROVIDENCE, R.I. (AP) — Dreading your eventual return to the office? The federal government is making available — for free — some waterfront workspaces with killer views that are sure to entice. But there’s a catch.

The General Services Administration says the U.S. Coast Guard has decided it no longer needs four of the nation’s most picturesque lighthouses, and it’s inviting certain types of organizations to take them over at no cost.

The GSA, which has been getting rid of its large inventory of obsolete lighthouses, said Thursday that Beavertail Lighthouse in Jamestown, Rhode Island — America’s third-oldest lighthouse, and a beacon that defeated British forces torched out of spite in 1779 as they withdrew from the new nation — is up for grabs.

Conditionally, that is: The government says it’ll make the historic lighthouses and their outbuildings available free of charge to federal, state and local agencies; nonprofit organizations; educational and community development agencies; or groups devoted to parks, recreation, culture, or historic preservation.

Beavertail Light “has been determined to be excess to the needs of the United States Coast Guard,” which is part of the Department of Homeland Security, GSA spokesperson Paul Hughes said in a statement.

All that remains of the original lighthouse is its foundation; it was constructed in 1749 and burned down by British soldiers leaving the Newport area in 1779. The current lighthouse was built in 1856 along with six additional structures totaling 5,171 square feet (480 square meters.)

Hughes said the government is asking interested groups to formally express their interest in the next 60 days, and the National Park Service will review the applications.

Perched on a peninsula, Watch Hill Light is a three-story granite block tower with a cast iron and glass lantern on top. It’s attached to a two-story brick keepers dwelling built in 1935. Outbuildings on the 4.5-acre complex include an oil house built in 1855-1856.

Cleveland Harbor West Pierhead Light, built in 1911 to guide ships in Lake Erie approaching the Port of Cleveland, housed a Coast Guard Station until 1976. It’s best known for its annual transformation into a majestic ice castle when winter temperatures freeze the surf that sprays its facade. A sister lighthouse, Cleveland Harbor East Pierhead Light, was sold a few years ago for $10,000.

Duluth Harbor North Pierhead Light, built in 1910 and perched at the westernmost tip of Lake Superior, also is listed on the National Register of Historic Places.