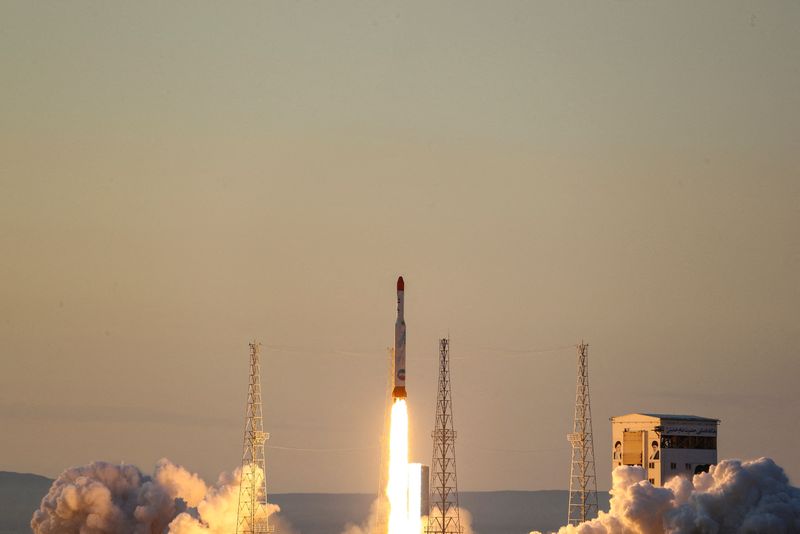 FILE PHOTO: Iranian satellite carrier rocket “Simorgh” is launched in an unknown location in Iran, in this picture obtained on December 30, 2021. Ministry of Defense of Iran/WANA (West Asia News Agency)/Handout via REUTERS

PARIS (Reuters) – France on Friday condemned Iran’s satellite rocket launch and said it was “all the more regrettable” as nuclear talks with world powers were making progress, echoing concerns expressed by the United States and Germany.

Iran said on Thursday it had used a satellite launch rocket to send three research devices into space, as indirect U.S.-Iran talks take place in Austria to try to salvage a 2015 nuclear deal.

“These activities are all the more regrettable as they come at a time when we are making progress in the nuclear negotiations in Vienna,” the French foreign ministry said.

“We call on Iran not to launch further ballistic missiles designed to be capable of carrying nuclear weapons, including space launchers.”

Iranian state TV showed footage on Thursday of what it said was the firing of the launch vehicle from the Imam Khomeini Space Center in northern Iran at dawn.

The U.S. State Department said on Thursday Washington was aware of reports on the launch, adding such launches defy a U.N. Security Council resolution enshrining the 2015 nuclear deal.

Tehran denies its space launch activity is a cover for ballistic missile development.

The 2015 deal extended the time Iran would need to obtain enough fissile material for a nuclear bomb – if it chose to – to at least a year from about two to three months, in return for a lifting of sanctions.

The latest indirect talks between Iran and the United States on the 2015 deal resumed on Monday. On Tuesday, Washington expressed caution over upbeat comments by Iran and Russia about the talks, saying it was too soon to say if Tehran had returned to the negotiations with a constructive approach.