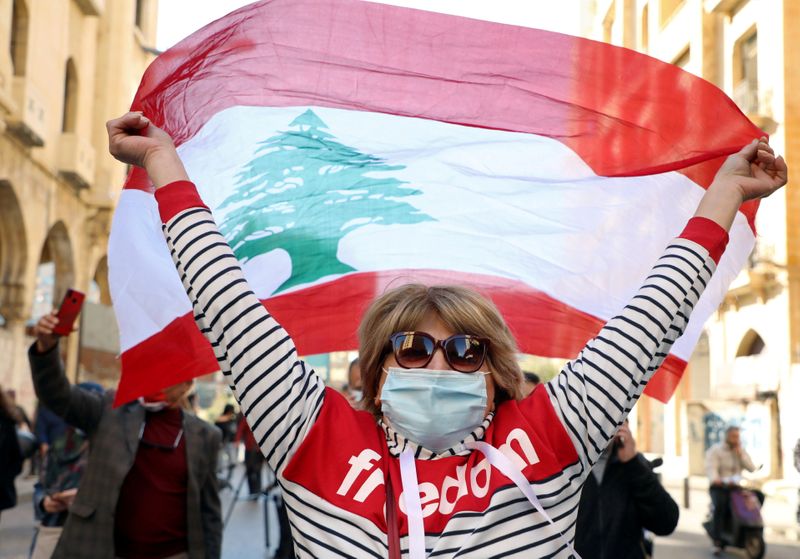 FILE PHOTO: A demonstrator holds up a national flag during a protest in Beirut, Lebanon March 6, 2021. REUTERS/Mohamed Azakir/File Photo

By John Irish and Robin Emmott

PARIS/BRUSSELS (Reuters) – France and the European Union are putting together proposals that could see asset freezes and travel bans imposed on Lebanese politicians to push them finally to agree on a government to rescue their country from economic collapse.

An explosion last August destroyed entire neighbourhoods of Beirut, and the government that resigned as a result has not been replaced, just as decades of patronage, corruption and mismanagement have left Lebanon almost bankrupt.

France has spearheaded efforts to help the territory it once administered, but has so far failed to force its many sectarian groups to agree on a cabinet, let alone start the reforms that might unlock foreign aid.

As many senior Lebanese politicians have homes, bank accounts and investments in the EU, and send their children to universities there, a withdrawal of that access could be a lever to focus minds.

“Concrete proposals are being developed against the very people who have abandoned the general interest in favour of their personal interests,” Foreign Minister Jean-Yves Le Drian told lawmakers on Tuesday.

“If certain political actors don’t assume their responsibilities, we won’t hesitate to assume ours.”

“The French are trying to Europeanise the Lebanon issue. It’s not something they can handle alone – or, at least, their solo efforts haven’t paid off so far,” the diplomat said.

“Sanctions haven’t been discussed directly, but if they are a way to change behaviour, they can’t be ruled out. Lebanon needs a functioning government.”

There is some support for the idea in Lebanon itself, where citizens are ever angrier as their living standards collapse while their leaders squabble.

“For Lebanese politicians, EU sanctions would have a pragmatic and serious weight because they are often in Europe,” former culture minister Ghassan Salame said after co-signing a column with 100 Lebanese civil society members in the French paper Le Monde, urging France to freeze assets.

But the diplomats said Paris was still wary and had yet to define targets. They also said putting such a regime in place could take time.

“It has to be coherent in terms of who they target, if they want this to have any impact and take into account Lebanese realities. It has to be evenly spread,” said a third diplomat.

Two of the diplomats said the EU would also have decide whether and how to target Hezbollah, whose leaders are less likely to have interests in the EU that could be blocked.

“The French got the message across to officials here about the possibility of sanctions … but so far it lacks teeth,” a senior Lebanese political source said.