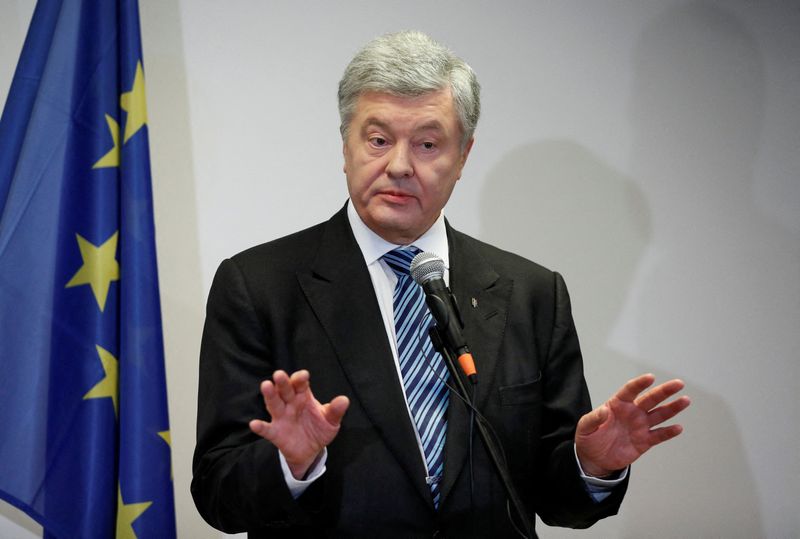 Ukrainian former President Petro Poroshenko speaks during a news conference in Warsaw, Poland January 16, 2022. Poroshenko gives a press conference on the eve of his scheduled departure for Kyiv, where he faces a possible arrest on suspicion of high treason by financing pro-Russian separatists in eastern Ukraine while in office in 2014-2015. REUTERS/Gleb Garanich

WARSAW (Reuters) – Former Ukrainian president Petro Poroshenko said on Sunday he planned to return to Ukraine on Monday despite the threat of arrest in a treason case he says was trumped up by allies of current President Volodymyr Zelenskiy.

Poroshenko’s return sets up a showdown with Zelenskiy’s government in what critics say is an ill-judged distraction at a time when Ukraine is bracing for a possible Russian military offensive and appealing to Western allies for support.

Western diplomats have called for political unity in Ukraine ahead of Poroshenko’s arrival.

Poroshenko is being investigated for alleged treason linked to the financing of Russian-backed separatist fighters through illegal coal sales while in office in 2014-15. His party accused Zelenskiy of a reckless attempt to silence political opposition.

“If you ask me if I will be arrested, definitely not. Not because I am so confident but because I have no, absolutely zero reason for tha…I return to Ukraine to fight for Ukraine, not to fight with Zelenskiy,” Poroshenko told reporters in Warsaw.

Zelenskiy’s administration has distanced itself from the investigation, saying the prosecutors and judiciary are independent and accusing Poroshenko of thinking he was above the law.

On Friday, Zelenskiy’s chief of staff Andriy Yermak batted away suggestions that Zelenskiy was behaving like the Russian-backed former president Viktor Yanukovich, whose political rival Yulia Tymoshenko was jailed in December 2010.

Ukraine and its allies have sounded the alarm about tens of thousands of Russian troops massed near its borders.

After days of diplomacy last week achieved no breakthrough, the United States said on Friday Russia was preparing a pretext for an attack, something the Kremlin dismissed as “unfounded”.

“At this time more than ever it seems to me that all political leaders in #ukraine need to show unity, avoiding actions that may polarise,” Melinda Simmons, the British ambassador to Ukraine, said in a tweet on Saturday.

“We are demanding unity of the whole democratic forces to protect Ukraine…I am absolutely optimistic about the possibility of this unity, of democratic, responsible opposition forces,” Poroshenko said.

Poroshenko’s return to Kyiv from Warsaw on Monday coincides with the whistle-stop visit from the new German foreign minister, who will then head to Moscow for talks on Tuesday.

A confectionary tycoon and one of Ukraine’s richest citizens, Poroshenko was elected as head of a pro-Western government after the 2014 Maidan street protests ousted Yanukovich.

Relations between Ukraine and Russia collapsed after Russia’s annexation of Crimea and support for separatist fighters in a war in eastern Ukraine that broke out the same year.

Zelenskiy trounced Poroshenko in a landslide election in 2019 on a ticket to tackle corruption and curb the influence of oligarchs in the former Soviet republic.

Prosecutors in December asked a Ukrainian court to arrest Poroshenko, with the possibility of bail set at 1 billion hryvnia ($37 million).