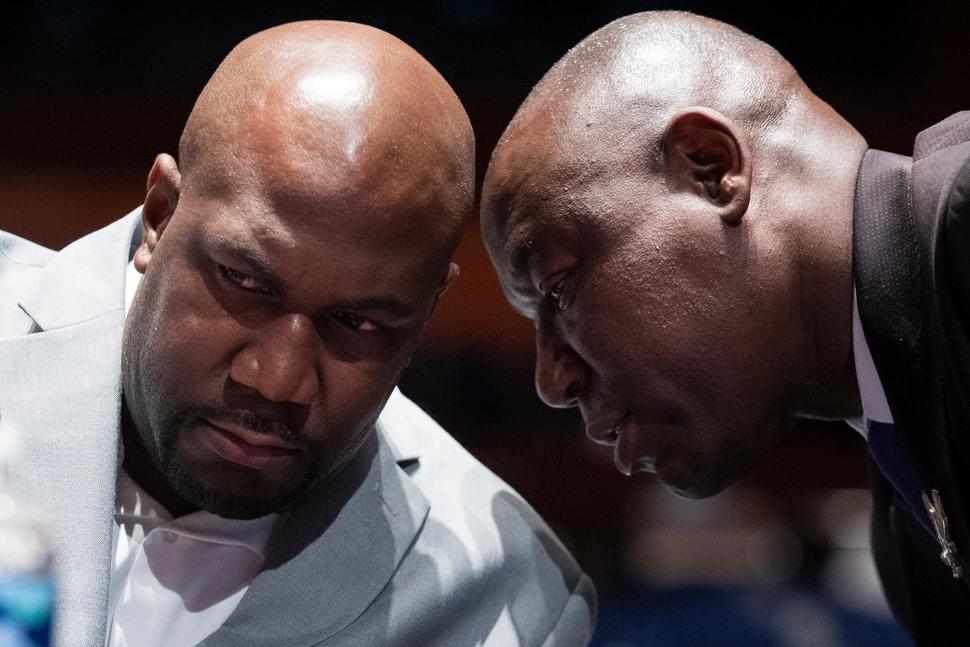 President Joe Biden will meet with the family of George Floyd at the White House Tuesday on the one year anniversary of his death.

President Joe Biden will meet with the family of George Floyd at the White House Tuesday on the one year anniversary of his death.

But beyond the meeting, Biden has yet to offer concrete action for the family of the man whose death at the hands of a white Minneapolis police officer sparked a global reckoning over systemic racism and movement for police reform. The path forward on Capitol Hill for Floyd’s namesake bill, the George Floyd Justice in Policing Act, remains unclear, but negotiators say they’ve made progress and expressed optimism this week about its prospects.

It’s a high-profile legislative fight where Biden has notably taken a backseat, preferring to leave the work of hammering out a compromise to lawmakers on Capitol Hill, in contrast to his fevered advocacy, both public and private, for his infrastructure bill and the COVID-19 relief package.

The Floyd family will have their own opportunity to weigh in on the congressional efforts Tuesday. In addition to their visit to the White House, the Floyd family is expected to meet Tuesday with House Speaker Nancy Pelosi and Rep. Karen Bass, the lead House negotiator on the policing bill.

While Biden set the anniversary of Floyd’s death as the initial deadline for the bill to reach his desk, the issue of police reform is a particularly politically thorny one, and Hill negotiators have struggled to hammer out a compromise that would make it through an evenly-divided Senate.

Still, speaking on Tuesday on CNN, Philonese Floyd, Floyd’s brother, expressed optimism at the chances for an eventual bill to pass the Senate. “I think things have changed. I think it is moving slowly but we are making progress,” he said.

Ben Crump, the Floyd family’s lawyer, echoed his comments, calling on Biden to “reiterate that we need to get it passed.”

It’s in line with the sentiment shared by many criminal justice advocates, who say the onus is on Congress, not the president, to act.

“It’s absolutely vital that members of Congress put partisan politics aside and pass meaningful reform to hold police officers responsible who act outside of their oath to protect and defend,” said Wade Henderson, interim president and CEO of The Leadership Conference on Civil and Human Rights, in a statement to the AP.

Floyd died on May 25, 2020 after former Minneapolis police officer Derek Chauvin kneeled on his neck for more than nine minutes, while Floyd repeatedly said he couldn’t breathe. His death sparked months of nationwide protests focused on systemic racism and a renewed debate over police reform in the U.S. Chauvin was convicted last month on multiple charges stemming from Floyd’s death.

The George Floyd Justice in Policing Act would ban chokeholds by federal officers and end qualified immunity for law enforcement against civil lawsuits, as well as create national standards for policing in a bid to bolster accountability. It passed the House in March, but faces a much tougher road in the evenly-divided Senate.

On Monday, White House press secretary Jen Psaki said that the White House still sees the George Floyd Act as the appropriate vessel for police reform. She added, “What we’ve seen from the negotiators — and we’ve been in close touch with the negotiators as well — is that they still feel there is progress being made.”

White House advisers say Biden and his team have been in frequent touch with Capitol Hill negotiators over the legislation, but that this is an issue in which a high-profile public campaign by the president may do more harm than good, because of the political challenges surrounding the bill.

The biggest point of contention remains the issue of ending qualified immunity, which shields officers from legal action taken by victims and their families for alleged civil rights violations.

While progressives and many criminal justice reform advocates are insistent that it remain in the final version of the bill, some Democrats, most notably House Majority Whip Jim Clyburn and Senate Democratic Whip Dick Durbin, have said they could see a compromise on the issue. And Senate Minority Leader Mitch McConnell has said he wouldn’t support any bill that ends qualified immunity.

Congressional negotiators are largely staying tight-lipped on the details of a compromise, but they’ve been working near daily on their efforts to hammer out a bill, and this week some sounded optimistic about its future. Republican Sen. Tim Scott of South Carolina, who has been working with Democratic Sen. Cory Booker of New Jersey to hammer out a compromise, said Monday that “I think we’re starting to see a frame” for the final legislation.

“We had good progress over the weekend, I thought. And I think we can see the end of the tunnel,” he said.

On qualified immunity, Scott’s proposal would allow individuals to pursue legal action against police departments instead of individual officers, as a compromise, but it’s unclear if advocacy groups would get behind such a proposal.

Booker echoed Scott’s comments on CNN, saying he was “encouraged” and that “I’m really hopeful that we can get something done in the weeks ahead, not months.”