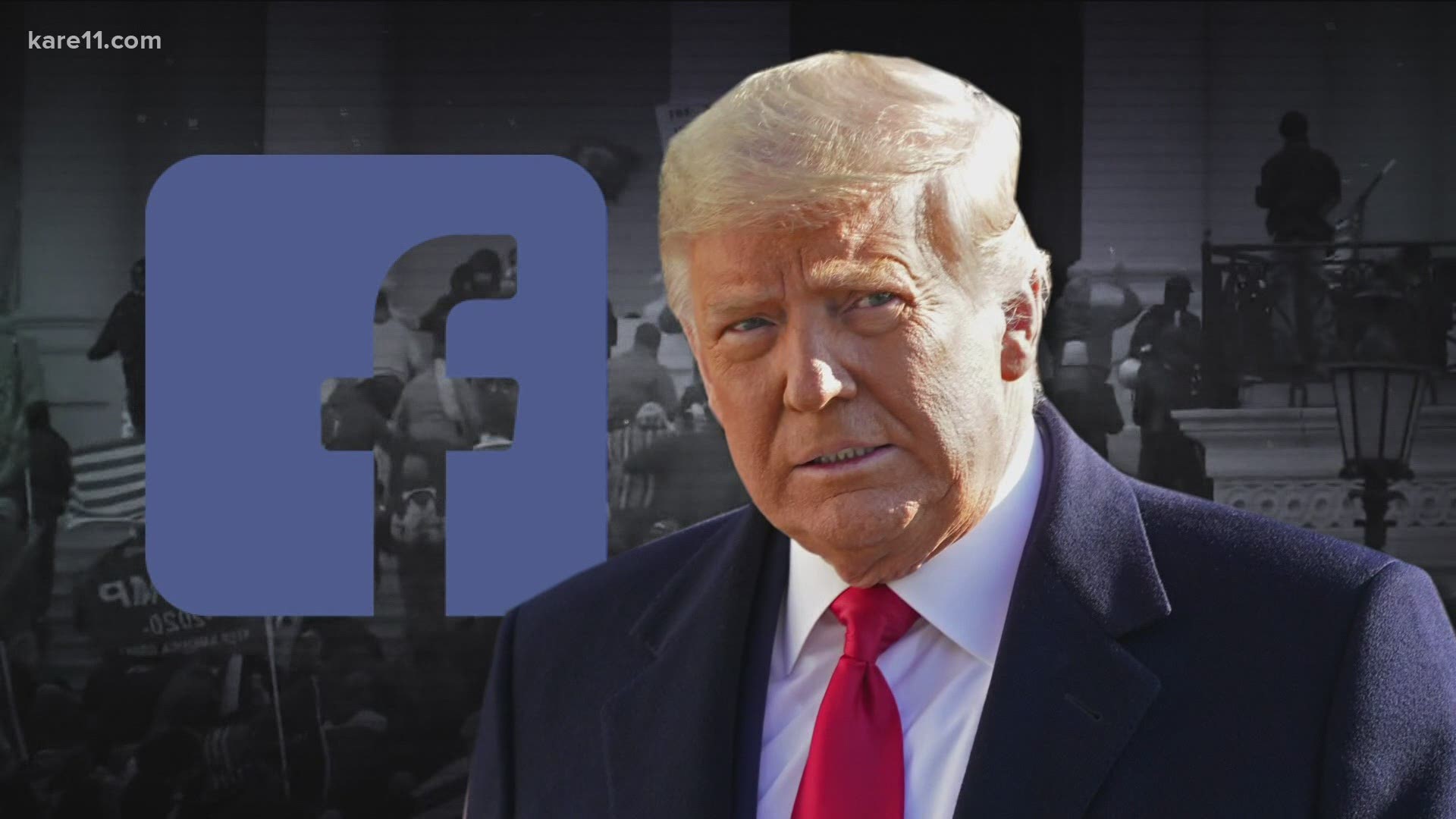 The Facebook Oversight Board on Wednesday upheld the initial suspension of former President Donald Trump’s account, four months after Facebook suspended him following the January 6 attack on the U.S. Capitol.

But the board said it was “not appropriate for Facebook to impose the indeterminate and standardless penalty of indefinite suspension.” The board said that Facebook’s “normal” policies include “removing the violating content, imposing a time-bound period of suspension, or permanently disabling the page and account.”

Facebook now must review the matter within six months, opening the door for a possible return. The board also ruled that Facebook must come up with “clear, necessary, and proportionate policies that promote public safety and respect freedom of expression.”

In response, Facebook said it was “pleased” with the decision, saying in a statement that they believe the January decision was “necessary and right.”

“We will now consider the board’s decision and determine an action that is clear and proportionate. In the meantime, Mr. Trump’s accounts remain suspended,” Facebook said in a statement.

Mr. Trump issued a statement through his Save America PAC that did not acknowledge the review process, but instead said Facebook, Twitter and Google are an “embarrassment.”

“Free Speech has been taken away from the President of the United States because the Radical Left Lunatics are afraid of the truth, but the truth will come out anyway, bigger and stronger than ever before,” Mr. Trump’s statement said. “The People of our Country will not stand for it! These corrupt social media companies must pay a political price, and must never again be allowed to destroy and decimate our Electoral Process.”

Following its own rules

Former Prime Minister of Denmark Helle Thorning-Schmidt, co-chair of the Oversight Board, said in a press conference that the decision was less a referendum on Mr. Trump than a decision on “Facebook and its users.”

In an interview with “CBS This Morning” co-host Tony Dokoupil, Thorning-Schmidt said that Facebook has to set the standard and the Oversight Board will review it from there.

“We also said to Facebook that they couldn’t just invent an arbitrary penalty,” Thorning-Schmidt told Dokupil.  “And that is what they did when they said that it was an indefinite ban. Indefinite ban doesn’t exist in Facebook’s own community standards, so we told Facebook to not come to us with something that doesn’t exist in their own rules.”

Facebook CEO Mark Zuckerberg established the oversight board in 2019. The 20-member body, which includes lawyers, professors, journalists, and human rights activists worldwide, is sometimes referred to as “Facebook’s Supreme Court” because it can overturn decisions made by company executives and its decisions are final.

However, Facebook critics have also panned the board as being too close to the company it’s supposed to regulate.

Roger McNamee, a Facebook investor turned critic, said on Wednesday that the oversight board has “failed.”

“Donald Trump has used Facebook to spread disinformation and incite hate and violence for years,” McNamee said in a statement. “Even when he posted ‘When the looting starts, the shooting starts,’ Facebook failed to act. He violated their terms of service again and again and again, facing no consequences. And yet, Facebook’s Oversight Board still could not summon the courage or common sense to uphold a permanent ban.”

Mr. Trump’s case is  the tenth decision the board has handed down. A five-member panel from the board was assigned to hear the case and produce a final opinion.

A riot at the Capitol

Mr. Trump was banned from major social media platforms in the wake of the January 6 attack, when a mob of his supporters descended on the Capitol to try to stop the counting of the Electoral College votes. Lawmakers were forced to flee as rioters overtook the building for several hours. Five people died and Mr. Trump was later impeached by the House on a charge of inciting an insurrection.

During the riot, Mr. Trump posted on Twitter and Facebook for his supporters to leave, but also repeated false claims about the election. 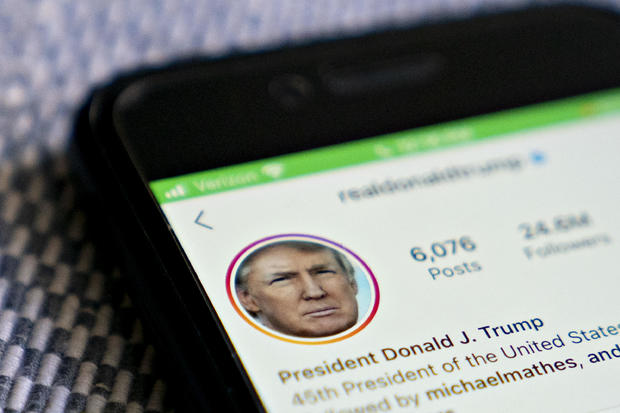 “I know your pain, I know you’re hurt,” Mr. Trump said in the video. “We had an election that was stolen from us. It was a landslide election and everyone knows it, especially the other side. But you have to go home now. We have to have peace.” Later in the video, he repeated the false claim that it was a “fraudulent election.”

Facebook took down his video later that day, calling it an “emergency situation.” “We removed it because on balance we believe it contributes to rather than diminishes the risk of ongoing violence,” posted Facebook vice president Guy Rosen.

During the COVID-19 pandemic and in the weeks leading up to and after the election, social media platforms had been flagging Mr. Trump’s posts that contained misleading information. On January 6, Facebook was the first to remove the video entirely.

After it was removed, Mr. Trump took to Twitter, writing: “These are the things and events that happen when a sacred landslide election victory is so unceremoniously & viciously stripped away from great patriots who have been badly & unfairly treated for so long. Go home with love & in peace. Remember this day forever!”

On January 7, Facebook suspended Mr. Trump’s account until the inauguration, with CEO Mark Zuckerberg posting that the “risks of allowing the President to continue to use our service during this period are simply too great.”

After the inauguration, Facebook turned its final decision on Mr. Trump’s account over to its Oversight Committee.

The committee said in April that it was extending the public comment period before making a decision. According to Reuters, Facebook said it had received over 9,000 comments, more than any other case.

In its previous decisions the Oversight Board has tended to rule in favor of “free expression.” The board has sided against the company on several high-profile cases, including a ruling to overturn Facebook’s removal of a post about the treatment of Uyghur Muslims in China. The Oversight Board has also overturned decisions to remove posts relating to nudity, COVID-19 misinformation and hate speech, while upholding a decision to remove a post that contained an ethnic slur.

Facebook’s reliance on the board to decide a small number of challenging cases has come under fire from critics who say the company needs to be doing more to reduce the spread of dangerous misinformation and disinformation on the world’s largest social network.

“It’s just outsourcing responsibility for the problems which are on its platform,” Carole Cadwalladr, an author and investigative journalist who first exposed the Facebook-Cambridge Analytica data privacy scandal in 2018, told CBSN on Tuesday. “It’s kind of whitewashing these decisions through this body of experts,” she said, and “deflecting attention from what are the real harms of Facebook, which is not content moderation. The real harms are really its business model, these algorithms which we know amplify polarizing and hate content and lead to some of the impacts that we’ve seen.”

Twitter has not allowed Mr. Trump back, and issued a ruling in April that it will not be archiving his tweets. But while Mr. Trump’s personal page will not be archived, Twitter has kept a record of several institutional government accounts, including those that belong to former White House press secretaries Sarah Huckabee Sanders and Kayleigh McEnany.

Twitter CFO Ned Segal said in an interview with Yahoo Finance that there are “no changes” in their thinking on Mr. Trump’s account.

“When you step back and think about our policies, we want to work hard to be consistent, to be transparent so people know exactly what to expect from us,” Segal said. “We don’t have an oversight board like that [like Facebook]. Our team is accountable for the decisions that we make. There is no changes to anything we have talked about in the past.”

Without a direct line to the millions of followers he used to reach on Twitter and Facebook, Mr. Trump has begun posting statements, sometimes several times per day, on a page of the Save America PAC website.