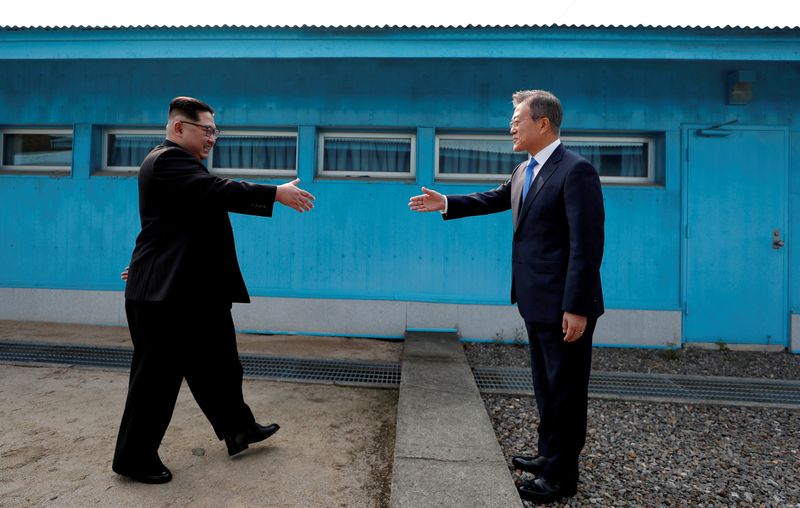 SEOUL (Reuters) – In a last-ditch attempt to restart talks with North Korea before his term ends next year, South Korean President Moon Jae-in is calling for a declaration that could eventually end a state of war that has technically lasted since the 1950s.

South Korea and a U.S.-led U.N. force are technically still at war with North Korea since the 1950-1953 Korean War ended in an armistice rather than a peace treaty, and Seoul sees an “end of war declaration” as a way to build trust, restart stalled denuclearisation talks, and eventually secure a lasting peace agreement.

Such a declaration is seen as a less politically fraught issue than other points of contention, such as North Korea’s nuclear weapons.

But critics fear a declaration could undermine the U.S.-South Korea alliance or weaken international pressure over the North’s weapons programmes, and both Koreas have failed to follow through on previous efforts to end the war.

The idea of ending the war gained renewed attention in 2018 during a flurry of diplomacy between North Korean leader Kim Jong Un, then-U.S. President Donald Trump, and South Korea’s Moon.

The two Koreas agreed to declare the Korean War over by the end of that year, and Trump said the effort had his blessing if North Korea agreed to give up its nuclear arsenal.

But as disagreements over North Korea’s nuclear weapons and international sanctions dragged on, Washington and Pyongyang showed less interest and the idea stalled along with nearly all talks.

PROSPECTS FOR A DEAL

In a speech at the United Nations last month, Moon again raised the idea. North Korean officials responded that Moon’s proposals were of interest, but premature without a change in what they deemed to be hostile policies.

U.S. President Joe Biden’s administration has said it is open to negotiations without preconditions.

North Korea has rebuffed those overtures, however, saying that U.S. support for sanctions and military moves in the region suggest its talk of diplomacy hides hostile intent.

“To be effective, (a declaration) needs to be embedded in a broader process,” said John Delury, a professor at South Korea’s Yonsei University. “But signalling readiness for an end of war declaration is, at minimum, a way for the Biden administration to signal they are serious about ending the so-called hostile policy.”

When asked about the South’s proposals, White House National Security Advisor Jake Sullivan this week declined to comment on specifics. He said that the United States agreed with South Korea on the need for diplomacy, but may have a different perspective when it comes to the timing, conditions, or sequence of different steps.

Some analysts note that a deal could have implications for the roughly 28,500 U.S. troops and the U.N. command stationed in South Korea as a legacy of the war, which help secure the Demilitarized Zone (DMZ) between the two Koreas.

South Korea’s plan calls for a political declaration that the Korean War is over, then a peace treaty that replaces the armistice, and finally the establishment of a broader peace regime, said Duyeon Kim, with the U.S.-based Center for a New American Security.

The Biden administration may support raising the idea of a declaration as a way to gauge North Korean attitudes but is unlikely to support anything that alters the armistice, she said.

North Korea, meanwhile, has made it clear it is not interested in a symbolic declaration.

“It would likely be interested if a declaration alters or promises to change the armistice and U.N. Command,” Kim said.