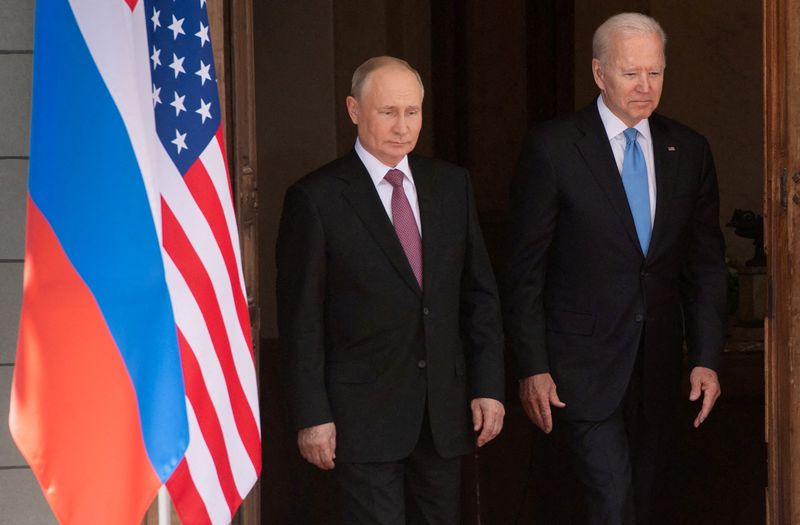 LONDON (Reuters) -Growing tensions between Moscow and Western powers have raised the prospect of new sanctions being imposed on Russia, possibly the severest yet, if it attacks neighbouring Ukraine.

U.S. Senate Democrats have unveiled a bill https://www.reuters.com/world/us-senate-democrats-unveil-russia-sanctions-bill-washington-post-2022-01-12 to impose sweeping sanctions on Russian government and military officials, including President Vladimir Putin, and banking institutions if Moscow engages in hostilities against Ukraine.

“If Russia is using its conventional military to acquire land in Ukraine, that will meet a severe economic response,” a senior White House official said on Wednesday.

Russia has massed tens of thousands of troops https://www.reuters.com/world/europe/russian-military-drills-belarus-create-new-threats-ukraine-2022-01-18 near Ukraine’s borders in what Kyiv and its allies fear could be preparation https://www.reuters.com/world/europe/germany-says-russia-will-pay-price-if-it-moves-ukraine-2022-01-17 for a new military offensive.

Russia, which denies planning to attack Ukraine, has been subject to sanctions since its 2014 annexation of Crimea. Further punitive measures were added after a former Russian spy was poisoned in Britain in 2018 and following an investigation into alleged Russian meddling in the 2016 U.S. presidential election won by Donald Trump.

Russia has denied any role in the poisoning of ex-spy Yuri Skripal and his daughter, and denies trying to interfere in foreign elections.

Here are some ways financial sanctions could target Russia:

One of the harshest measures would be to disconnect the Russian financial system from the global SWIFT messaging system widely used in international financial transactions.

SWIFT, used by more than 11,000 financial institutions in over 200 countries, is a Belgium-based cooperative governed by a 25-member board, including Eddie Astanin, chairman of Russia’s Central Counterparty Clearing Centre (NCC).

There is a precedent: In March 2012, SWIFT disconnected Iranian banks as international sanctions tightened https://www.reuters.com/article/usa-iran-sanctions-swift-idUSFWN1XK0YW against Tehran over its nuclear programme – a move that saw the country lose half its oil export revenues and 30% of foreign trade, according to think tank Carnegie Moscow Center.

Iran’s economy is smaller and not as linked-up internationally as the Russian economy, whose interconnectedness with the West has worked as a shield. The United States and Germany would stand to lose the most, as their banks are the most frequent SWIFT users with Russian banks, according to Maria Shagina at the Carnegie Moscow Center.

The number of messages sent via SPFS reached around 2 million, or one-fifth of Russian internal traffic, in 2020, according to the central bank, which aims to increase this to 30% in 2023. However, the SPFS system, which has size limits on messages and is operational only on weekdays, has had a hard time picking up foreign members, Shagina wrote in a 2021 paper.

Brian O’Toole, a fellow at the Atlantic Council think tank, said cutting Russia off from SWIFT would cause immediate disruption but the impact would diminish over time.

“Some payments would be delayed and there may be increased cost in making new ones, but broadly speaking there is unlikely to be a massive collapse of Russian trade so long as that trade remains legal/not sanctioned,” O’Toole said.

The White House has told the U.S. chip industry to be prepared for new restrictions on exports to Russia https://www.reuters.com/business/white-house-tells-chip-industry-be-ready-potential-russia-export-curbs-2022-01-19 if Moscow attacks Ukraine, sources said. This includes potentially blocking the country’s access to global electronic supplies.

Similar measures were deployed during the Cold War, when the United States and other Western nations maintained severe technology sanctions on the Soviet Union, keeping it technologically backward and crimping growth.

Access to Russian bonds has become increasingly restricted and curbs could be tightened further, with a ban on secondary market participation floated as one option.

Sanctions imposed in 2015 made future Russian dollar debt ineligible for many investors and indexes such as JPMorgan’s EMBI Global. Those measures have cut Russia’s external debt by 33% since early 2014 — from $733 billion to $489 billion in the third quarter of 2021. Lower debt improves a country’s balance sheet on the surface, but deprives it of financing sources that could contribute to economic growth and development.

The United States and the European Union already have sanctions on Russia’s energy, financial and defence sectors.

Sanctions applied to individual firms often cause sector-wide pain, according to former U.S. State Department economist Mark Stone, as they make investors worry that the curbs will be widened or that they will be unable to differentiate.

“Sanctioning all transactions with Russian banks and freezing assets would be more impactful and more targeted” than a cut-off from SWIFT, which would become really useful only following broad U.S. financial sanctions, the UK and the European Union, said Atlantic Council’s O’Toole.

(Reporting by Karin Strohecker in London and Andrey Ostroukh in Moscow; Editing by Timothy Heritage)