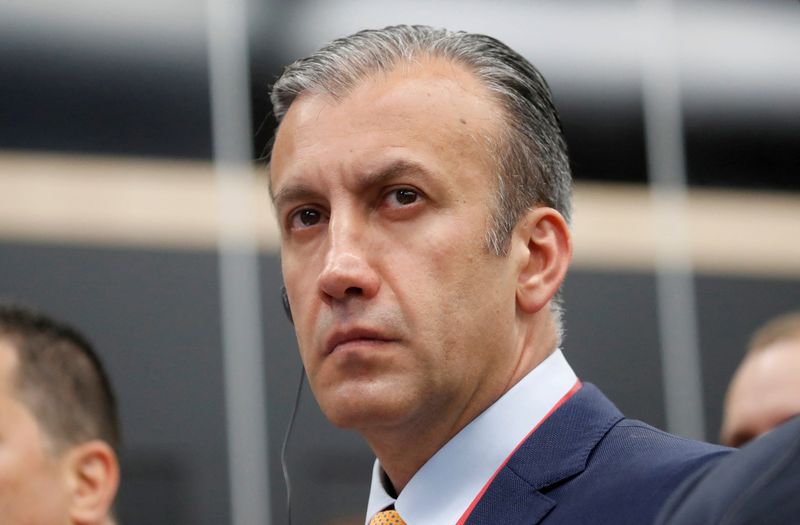 By Deisy Buitrago and Marianna Parraga

In recent weeks, El Aissami’s health has deteriorated, which could render him unable to fulfill his ministerial duties at least temporarily, according to the sources, all of whom asked not to be identified because of the sensitivity of the matter.

The minister – who is credited with helping Venezuela weather U.S. sanctions – recently underwent major surgeries, according to three of the people.

Four of the sources said that Maduro may appoint his ally Asdrubal Chavez, a cousin of the late Venezuelan President Hugo Chavez who is state-run Petroleos de Venezuela’s (PDVSA) current president, as oil minister, at least temporarily.

A final decision about whether to name a replacement to handle El Aissami’s other government responsibilities has not been taken, the sources said.

PDVSA, the oil ministry and the information ministry did not respond to requests for comment on the health of the minister and Maduro’s plans.

El Aissami could not immediately be reached for comment.

The official’s possible suspension from duties follows a shakeup in PDVSA that removed key officials who had worked with El Aissami in several divisions and subsidiaries, including its maritime arm and the supply and trading department, three of the sources said.

“His team at the supply and trade department has been dismembered. It’s just a matter of time before he is replaced,” one of the people said.

El Aissami began supervising PDVSA in 2018 as a board member and chief of a restructuring committee. Last year, he also took the position of oil minister and top representative of Venezuela before OPEC.

The minister, who is also Maduro’s vice president for economy, has a reputation of delivering results and establishing key alliances with nations like Iran. He has played a key role in helping his government to maintain a functioning economy despite wide-ranging U.S. sanctions.

Since 2017, he has also featured in the U.S. list of sanctioned persons under drug trafficking accusations and in 2019 he was added to the U.S. Immigration and Customs Enforcement’s “most-wanted” list.

El Aissami has denied the trafficking charges while accusing Washington of imposing illegal sanctions on the nation.

El Aissami – like his predecessor in the oil ministry – has failed to meet the production goals set by Maduro for recovering over 1 million barrels per day (bpd) of lost output in the country.

Venezuela’s oil output has dwindled from around 2.5 million bpd a decade ago after U.S. sanctions compounded years of underinvestment and mismanagement of the oil industry.

However, in recent months, El Aissami’s administration has been able to surpass 900,000 barrels of daily production, creating expectations for the first time since sanctions were imposed that Venezuela’s output might stabilize.

(Reporting by Deisy Buitrago and Vivian Sequera in Caracas, Marianna Parraga in Houston and Mircely Guanipa in Maracay. Editing by Daniel Flynn and Marguerita Choy)