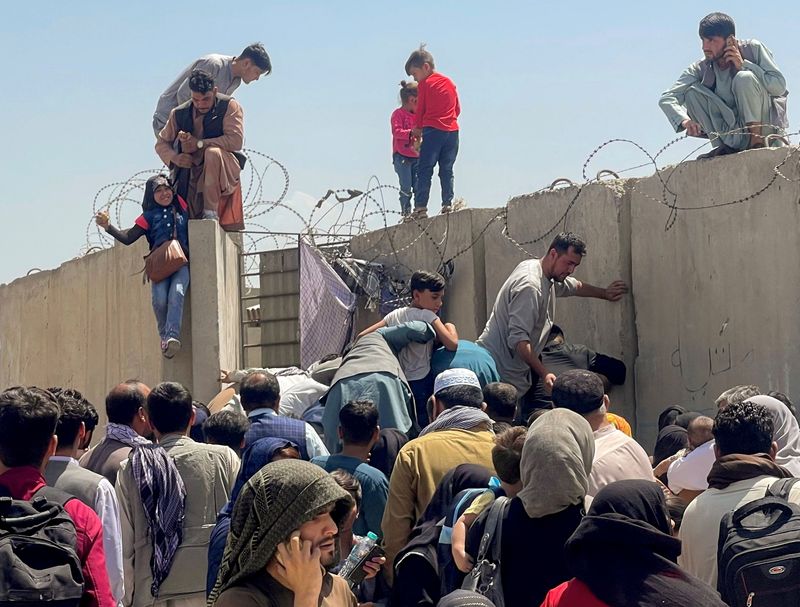 A man pulls a girl to get inside Hamid Karzai International Airport in Kabul, Afghanistan August 16, 2021. REUTERS/Stringer

(Reuters) – Military flights evacuating diplomats and civilians from Afghanistan restarted early on Tuesday after the runway at Kabul airport was cleared of thousands of people desperate to flee after the Taliban seized the capital.

The number of civilians at the airport had thinned out, a Western security official at the facility told Reuters, a day after chaotic scenes https://www.reuters.com/world/asia-pacific/frantic-scenes-kabul-airport-afghans-try-flee-taliban-2021-08-16 in which U.S. police fired gunshots to disperse crowds and people clung to a U.S. military transport plane as it taxied for take-off.

“Many people who were here yesterday have gone home,” the official said. Reuters witnesses, however, could still hear occasional shots coming from the direction of the airport, while streets elsewhere in Kabul appeared calm.

U.S. forces took charge of the airport, the only remaining exit point from Afghanistan as the Taliban held control of all ground routes following their dramatic advances across the country during the past week, which climaxed on Sunday when the insurgents streamed triumphantly into Kabul, capturing the capital without a fight.

Flights were suspended flights for much of Monday, when at least five people were reportedly killed, although it was unclear whether they had been shot or crushed in a stampede. A U.S. official told Reuters two gunmen who had appeared to have fired into the crowd were killed by U.S. troops.

Against the scenes of panic and confusion in Kabul, U.S. President Joe Biden defended his country’s decision https://www.reuters.com/world/us/biden-says-us-mission-afghanistan-was-never-supposed-be-nation-building-2021-08-16 to withdraw U.S. forces after 20 years of war – the nation’s longest – that he described as costing more than $1 trillion.

But the video on Monday of hundreds of desperate Afghans trying to clamber onto a U.S. military plane as it was about to take-off could haunt the United States, just as a photograph in 1975 of people scrambling to get on a helicopter on the roof of the U.S. embassy in Saigon became emblematic of the humiliating withdrawal from Vietnam.

The speed at which Afghan cities fell, in days rather than the months predicted by U.S. intelligence, and fear of a Taliban crackdown on freedom of speech and human rights, especially women’s rights, have sparked criticism.

Biden insisted he had to decide between asking U.S. forces to fight endlessly in what he called Afghanistan’s civil war or follow through on an agreement to depart negotiated by Republican former President Donald Trump.

“I stand squarely behind my decision,” Biden said. “After 20 years I’ve learned the hard way that there was never a good time to withdraw U.S. forces. That’s why we’re still there.”

Facing a barrage of criticism, from even his own diplomats, https://www.reuters.com/world/us/we-could-have-done-more-frustration-grows-washington-over-bidens-kabul-2021-08-16 he blamed the Taliban’s takeover on Afghan political leaders who fled the country and the Afghan army’s unwillingness to fight.

The capitulation of the government forces, trained for years and equipped by the United States and others, was a major factor behind the Taliban’s victory.

The U.N. Security Council called for talks to create a new government in Afghanistan after Secretary General Antonio Guterres warned of “chilling” curbs https://www.reuters.com/world/un-chief-urges-taliban-restraint-is-concerned-about-women-girls-2021-08-15 on human rights and violations against women and girls.

Nobel Peace Prize winner Malala Yousafzai said she was “deeply concerned” about the situation, and called for world leaders to take urgent action. She urged Pakistani Prime Minister Imran Khan to open his country to refugees.

Former Afghan Prime Minister Gulbuddin Hekmatyar said he was headed to Doha to meet with a Taliban delegation on Tuesday, accompanied by former President Hamid Karzai and the head of the High Council for National Reconciliation, Al Jazeera TV reported.

Envoys from the United States, China and other nations had been meeting with Afghan government negotiators and Taliban representatives in Qatar for peace talks https://www.reuters.com/world/middle-east/doha-talks-afghanistan-end-with-call-accelerated-peace-process-halt-attacks-2021-08-12 in the days leading up to the Taliban’s capture of Kabul.

Many Afghans fear the Taliban will return to past harsh practices. During their 1996-2001 rule, women could not work and punishments such as public stoning, whipping and hanging were administered.

Taliban spokesman Suhail Shaheen told Dunya News that the group would improve the security of Kabul and “respect the rights of women and minorities as per Afghan norms and Islamic values.”

Shaheen added the new regime would ensure representation of all ethnicities and that the Taliban were keen to work with the international community to reconstruct the country.

Shaheen said on Twitter that the group’s fighters were under strict orders not to harm anyone.

“Life, property and honour of no one shall be harmed but must be protected by the mujahideen,” he said.