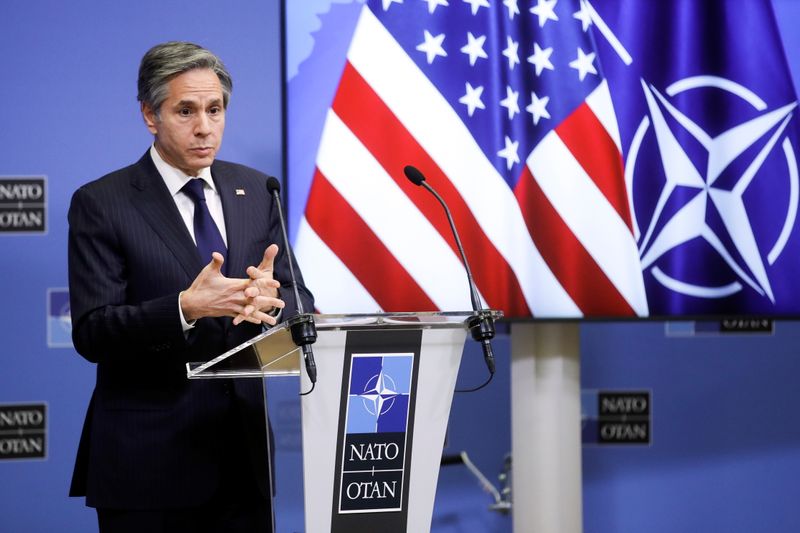 U.S. Secretary of State Antony Blinken gives a press briefing at the end of a NATO Foreign Ministers’ meeting at the Alliance’s headquarters in Brussels, Belgium, March 24, 2021. Olivier Hoslet/Pool via Reuters

BRUSSELS (Reuters) – The West must engage with Russia to promote mutual interests but remain “very clear-eyed”, U.S. Secretary of State Antony Blinken said on Wednesday, at the Biden administration’s first cabinet-level meeting with the NATO alliance scorned by Donald Trump.

NATO Secretary General Jens Stoltenberg called on Russia to resume dialogue through a council that has not met for two years, arguing that even a difficult relationship needed to be managed to reduce risks.

Blinken, the first top U.S. official to visit NATO since Biden took office in January, charmed allies with a conciliatory tone, after four years when Trump portrayed the Western military alliance as outdated, and castigated members for spending too little on defence.

Blinken called for a firm, shared position on Russia.

“Ultimately, I think what we can hope is to have a relationship with Russia that is at least predictable and stable,” he told a press conference in Brussels.

“Even as we work with Russia to advance our interests and advance alliance interests, we will also work to hold Russia to account for its reckless and adversary actions.”

Stoltenberg lobbied for a revival of the NATO-Russia Council (NRC) that was created in 2002 to facilitate consultation between the Western military alliance and Moscow. With relations strained, the council last met in July 2019.

“Dialogue is important. Especially when times are difficult as they are now, then it is important to sit down and discuss also difficult issues,” Stoltenberg told journalists after foreign ministers of the alliance met in Brussels.

“Even without any improvement in the relationship between NATO allies and Russia, I believe that at least we have to manage a difficult relationship – on transparency, risk reduction and also addressing arms control,” he said, adding it was up to Moscow to accept an invitation by NATO.

NATO’s Russia policy follows a two-track approach of deterrence and dialogue, though the alliance suspended all practical cooperation with Moscow in April 2014 following Russia’s annexation of Crimea from Ukraine.

The NRC was revived in 2016 and met regularly until 2019. But ties between Russia and the West are at post-Cold War lows, strained by issues ranging from Ukraine to allegations of hacking U.S. elections and the conflict in Syria.

On Tuesday, Blinken had described what he said were Russian attempts to destabilise the West and China’s military rise as threats that required NATO to come together.

(Reporting by Sabine Siebold in Berlin; Editing by Timothy Heritage and Peter Graff)