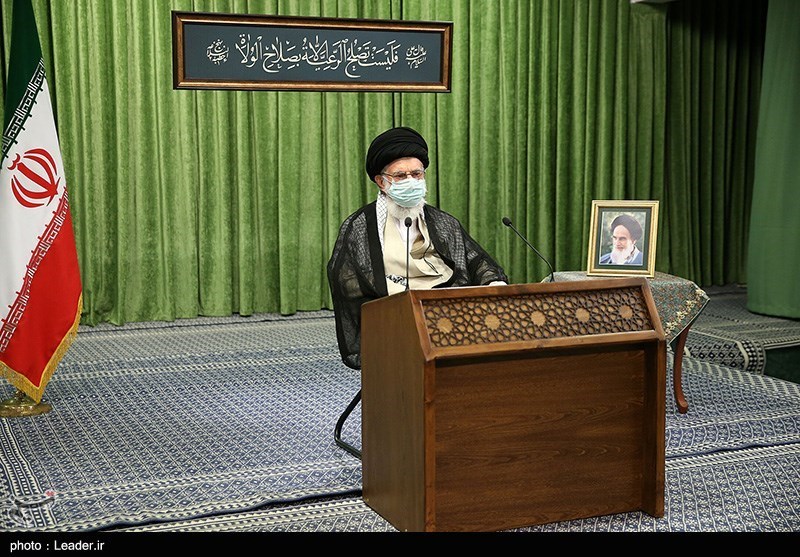 “Dear Iranian nation! Election takes place in one day, but its outcome is there for several years,” the Leader said during a meeting via video-link with members of the Iranian Parliament on Thursday.

“Participate in the election! Consider the election as belonging to yourselves, because it does belong to you.”

Ayatollah Kahmenei added, “Do not heed the words of these people who propagate that ‘(taking part) is futile, let’s not go- we won’t go to the ballot box.’ These don’t have the people’s interests in mind. Anyone who does would never ask people not to go to the ballot box.”

The Leader also backed up the Constitutional Council against recent criticism of its disqualification of some presidential hopefuls, saying the council’s work was based on legal procedures.

“The respected Constitutional Council did what it had to do and what it deemed necessary to do as its duty, (and) determined the candidates,” Ayatollah Khamenei said.

The Leader pointed to the criticisms that have been directed at the Constitutional Council and said the critical statements have been made with different motives. Some of the statements are made because of real care for the people and concerns about a low participation in the election, he said, adding that others complained because their favorite candidate was not approved.

Neither of those two groups can be found fault with, Ayatollah Khamenei said, explaining however that a third group of individuals were opposing the concept of the Constitutional Council altogether. “God will not have mercy on these people.”

Iran’s Interior Ministry released a list of approved presidential candidates — drawn up by the Constitutional Council after 10 days of vetting — on Tuesday. Several high-profile figures, including Vice President Es’haq Jahangiri and former Parliament Speaker Ali Larijani — were not found qualified to run. That sparked criticism of the Council, mainly by the Reformist camp, which had intended to field Jahangiri as its top choice.

Iranian President Hassan Rouhani also said he had written to Ayatollah Khamenei to express his grievances about the matter.

The Leader first thanked all the individuals who nominated to run. “Many of these people undoubtedly entered the scene because they felt a responsibility to.”

“Secondly,” Ayatollah Khamenei said, “I have to doubly thank those whose qualification was not approved and was not ascertained by the Council and who reacted nobly. Some of them even encouraged people to participate in the election.”

The Leader said the fact that the Constitutional Council had not been able to ascertain the qualification of certain candidates did not mean that those individuals were not qualified — “they may even be highly qualified” — what it meant was that the Council had not been able to determine such a qualification based on its own recognition, the reports, and the available tools.

The election is a race to serve the people, said the Leader, urging the candidates to view the election as such.

Ayatollah Khamenei also advised the candidates to refrain from mud-slinging and leveling accusations against others, or making unfeasible pledges.

“Moral considerations should seriously be taken into account. If the election candidates really observe Islamic ethics in the debates and in the interviews that they give, this (behavior) will spread over to the society,” he said.

The Leader also advised the candidates against attempting to break the taboos.

“To be seen and heard more, certain parties come up with the solution of breaking customs, ‘violating the red lines of the establishment’ — as they would say themselves. The Islamic Republic is firmly in place and is there to stay; it is an establishment that has been settled in place; the main contours of the establishment are clear. People should not attempt to somehow earn themselves a position by violating the important boundaries of the Islamic Republic. No position will be earned that way,” Ayatollah Khamenei said.