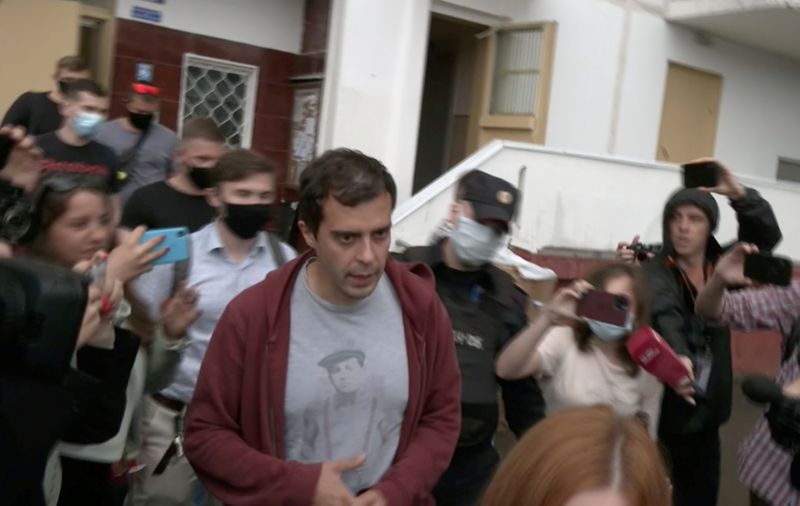 FILE PHOTO: Roman Dobrokhotov, the editor-in-chief of “The Insider” Russian news outlet, who was taken in by Interior Ministry officers for questioning over a slander case, is escorted to a police van in Moscow, Russia July 28, 2021, in this still image taken from video. Video taken July 28, 2021. REUTERS TV/via REUTERS /

By Anton Zverev and Tom Balmforth

MOSCOW (Reuters) -The editor of a Russian news outlet that angered the Kremlin with its investigations, including into the poisoning of opposition politician Alexei Navalny, said the authorities had declared him a wanted man.

Roman Dobrokhotov, editor-in-chief of The Insider, told Reuters the authorities had accused him of illegally crossing the border to leave Russia.

He said he was currently outside Russia and did not want to disclose his location. He did not say how he had left Russia.

The Federal Security Service, the successor agency to the Soviet KGB, said Dobrokhotov had illegally crossed the border into Ukraine on the night of July 31 on foot with the help of other unnamed individuals.

The FSB will seek his arrest and prosecution, it said in a statement.

The Interior Ministry did not respond to a request for comment.

Media outlets and journalists critical of the authorities faced mounting pressure before a parliamentary election this month and the campaign https://www.reuters.com/world/europe/russia-declares-protest-monitoring-group-ovd-info-foreign-agent-2021-09-29 against people the authorities deem threats to political stability shows no signs of letting up.

The Insider angered authorities by helping to identify state security officials it said were behind the poisoning of Navalny in August last year. The Kremlin denies any responsibility for Navalny falling ill.

The Insider is one of several media outlets that Russia has this year declared “foreign agent” media, a designation that carries negative Soviet-era connotations, reduces advertising revenue and imposes labelling requirements on the outlets.

The Kremlin denies that media outlets are targeted for political reasons. It says action against them is solely based on the law and media designated as foreign agents can continue their work in Russia.

On Thursday morning, law enforcement officers searched two Moscow apartments belonging to Dobrokhotov’s family and parents and seized mobile phones and computers, the editor said on Twitter. The FSB also took his wife and father in for questioning, The Insider reported.

His lawyer Yulia Kuznetsova told Reuters he had been declared a wanted man on Sept. 23.

Dobrokhotov said police had confiscated his passport in July after officers searched his home and named him as a witness in an unrelated slander case.

He accused the police of acting illegally by taking his passport and told Reuters he had every right to travel outside Russia. He also said he considered the allegation he had illegally crossed the border to be absurd.

Dobrokhotov attended a conference in the Estonian capital Tallinn in early September that was attended by allies of Navalny, who is currently serving prison time for charges he says were trumped up.