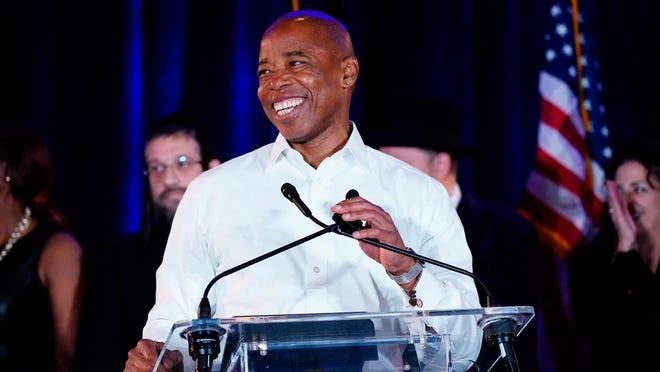 Adams will become New York’s second Black mayor and inherit a city at a pivotal time in its economic recovery from the pandemic.

Adams, a Democrat, defeated longshot Republican candidate Curtis Sliwa after he narrowly won his party’s nomination in June during a crowded Democratic primary.

Adams vowed Tuesday night to take the city in a new direction and make its government work for the poor, homeless and underserved.

“This is not about Eric Adams becoming mayor. This is about carving out a pathway so people could enjoy the prosperity that this city has to offer,” he said from the stage of his victory party where he was joined by Gov. Kathy Hochul.

Adams said he would “build bridges” between business leaders and the inner city, create jobs for New Yorkers and reduce crime while addressing its root causes.

“In four years, this city is never going to be the same. Once we move forward, we will never go back,” Adams said.

Adams brought a photo of his late mother as he voted Tuesday in Brooklyn and reflected on his working-class upbringing. Sliwa brought one of his many cats and got into a dispute with an election worker over whether he could bring the cat and his red jacket emblazoned with his name inside the polling location.

During the primary, Adams faced a number of progressive and moderate challengers but ultimately won with heavy support in lower-income, Black and Latino neighborhoods of Brooklyn and Queens.

“When you look at all the other mayors who have come up from where they came up from, there is no one like him. He is unique,” Sid Davidoff, a fixture in New York City politics and adviser to former Mayor John Lindsay, told USA TODAY in June.

Adams, 61, was born in Brooklyn and raised in Queens. While a teenager, he was beaten in police custody, which prompted his desire to become a police officer.

While in the New York Police Department, Adams had a reputation as vocal critic of discriminatory practices within policing. He served as the head of the Grand Council of Guardians, a Black officers’ group, and formed 100 Blacks in Law Enforcement Who Care, which sought to fight racial profiling and police brutality while restoring trust among Black residents.

Adams’ stance on the police department has been more moderate than other Democrats in the city. While he supports trimming its budget and “civilianizing” sections that do not need to be staffed by officers, he also has backed the use of stop-and-frisk in some cases and reviving a disbanded anti-gun task force.

He also said he would appoint the first woman to head the NYPD in city history.

Beyond vowing to strengthen public safety, Adams has said he plans to make the city more friendly to businesses. “We have been defined as a business-enemy city instead of a business-friendly city,” he said in a September appearance on Bloomberg Radio.

He has also backed increasing affordable housing options and services at hospitals to house people with mental illness experiencing homelessness.

To combat the pandemic, he said he supports de Blasio’s vaccine mandate for city workers, including police officers, firefighters and EMTs. However, unlike de Blasio, Adams has also said he would require vaccines for students if the Food and Drug Administration gives full approval to a vaccine for children.

Adams also supports the “gifted and talented” program in the city’s schools, which de Blasio vowed to eliminate. The program requires a standardized test for 4-year-olds, and critics say it heightens educational inequalities, with white and Asian students making up a disproportionate share of its seats.

Sliwa, Adams’ opponent, did not stand much of a chance in a city where Democrats outnumber Republicans 7 to 1.

The Guardian Angels founder had described himself as a populist and sought to portray a “David versus Goliath” image against Adams.

Before running for mayor, Sliwa was well known in New York for his media antics and stunts, including faking crimes to fight for his Guardian Angels.

Sliwa opposed vaccine mandates and closing the Rikers Island jail complex. He also said he supported reversing police budget cuts and reducing the number of bike lanes in the city.

Conceding the race to Adams, Sliwa said he was offering friendship and solidarity to the new mayor.

“He’s gonna need it. He’s gonna need all the support he can get because of what Bill de Blasio is leaving behind,” Sliwa said, getting in a dig at the outgoing mayor.

Trump remains under investigation by the office over a fight to obtain his tax returns, while former Trump Organization finance chief Allen Weisselberg is facing tax evasion charges.

Bragg will take over for the longtime district attorney Cyrus Vance, Jr., who is retiring. Vance prosecuted the disgraced film producer Harvey Weinstein for rape.