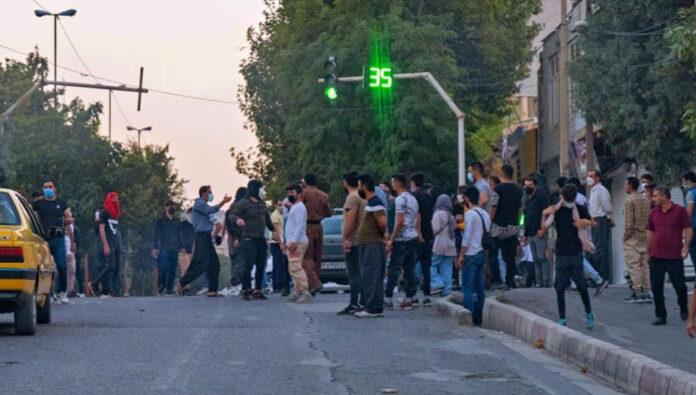 Iran’s nationwide uprising is marking its 98th day on Thursday following a day of various protest rallies, gatherings, nightly marches, and strikes. Protesters have continued to voice their opposition to the mullahs’ regime through various slogans, including “Death to Khamenei!” and “Death to the dictator!” referring directly to regime Supreme Leader Ali Khamenei.

Protests in Iran have to this day expanded to at least 280 cities. Over 750 people have been killed and more than 30,000 are arrested by the regime’s forces, according to sources of Iranian opposition People’s Mojahedin Organization of Iran (PMOI/MEK). The names of 601 killed protesters have been published by the PMOI/MEK.

On Thursday evening people in the city of Semirom in Isfahan Province, central Iran, were seen taking to the streets and chanting anti-government slogans, including: “Death to Khamenei! Damned be Khomeini!” and “We pledge on the blood of our compatriots that we are standing to the end!”

On Wednesday evening people in Tehran’s Sa’adatabad district and Valiasr Crossroads took to the streets to establish roadblocks and began chanting “Death to the dictator!” and “This is the year Seyed Ali (Khamenei) is overthrown!” among other slogans.

Similar protests were also held in Saqqez, the hometown of Mahsa Amini, and Sanandaj, the capital of Kurdistan Province where protesters were seen establishing roadblocks and also chanting “Death to Khamenei!”

On Wednesday morning schoolkids in the city of Ahvaz, the capital of Khuzestan Province, took to the streets to launch new protests and began chanting “Death to the dictator!” in reference to regime Supreme Leader Ali Khamenei. Storeowners in the city of Kamyaran, western Iran, are continuing their strike in solidarity with the nationwide uprising.

Reports indicate that workers of a copper company in Tehran are on strike. Furthermore, in the early hours of midnight on Wednesday locals in the Punak district of Tehran took to the streets and began chanting: “Political prisoners must be released!”

Iranian opposition coalition NCRI President-elect Maryam Rajavi emphasized on the fact that the Iranian people are only looking forward and that their struggles will be victorious.

“Such a development marks a genuine change of season in Iran’s democratic movement, which in contrast to the bitter past experiences will never return to the winter of the Shah and the mullahs. Instead, it will herald a new spring of freedom and people’s sovereignty in Iran,” the NCRI President-elect explained.