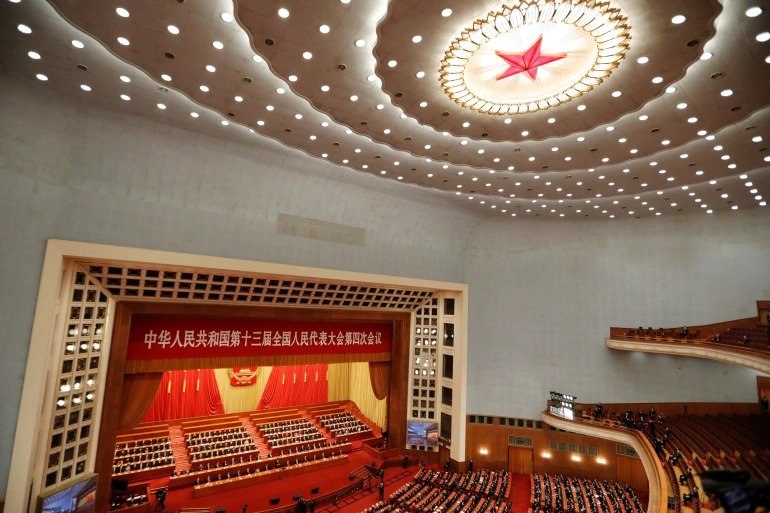 China has embarked on a PR campaign intent on flipping the global narrative on what constitutes democracy in an attempt to attack the United States political system, as US President Joe Biden prepares to open his US Summit for Democracy later this week.

China and Russia were left off the guest list for the event, which will be held virtually on December 9 and 10.

But after protesting their exclusion together in a rare OpEd, Beijing now appears to have gone on the offensive.

On Saturday, China held a similarly-themed International Forum on Democracy as the powerful State Council issued a white paper called China: Democracy That Works, which described how China had developed its model of democracy.

While China is best known as a one-party state led by the Chinese Communist Party, the country does have its own legislature. The National People’s Congress has nearly 3,000 members chosen from across China’s regions and provinces and even the armed forces, the vast majority of whom are party members. Dismissed as a “rubber stamp parliament” by critics, all members of the NPC meet once a year, with most decisions made by a far smaller standing committee.

The country doesn’t have a free media or an independent judiciary — both of which are generally seen as crucial to a properly functioning democracy.

The Economist Intelligence Unit’s Democracy Index ranked China, which it described as an “authoritarian regime”, 151 out of 167 countries and territories for 2020. The semi-autonomous city of Hong Kong was termed a “hybrid regime”. The ranking assesses a country’s democracy based on five categories: electoral process and pluralism, civil liberties, the functioning of government, political participation and political culture. The ranking termed the US a “flawed democracy”.

“The motivation, from their perception and viewpoint, is to present what they consider as an alternative interpretation of democracy. It complements their narrative of capacity-building for connectivity and economic development,” said Tai Wei-lim, a research fellow adjunct at the National University of Singapore East Asian Institute, citing major infrastructure projects such as the Belt and Road Initiative.

The summit and an accompanying social media blitz on Twitter by Chinese media and officials is just one way that China is trying to push back against Biden’s narrative about democracy as China tries to present itself as a true multilateral player, says Wen-ti Sung, a lecturer at the Australia National University’s Taiwan Studies Programme.

During the Trump administration, as the White House pulled out of major global initiatives, such as the Paris agreement on climate change, and threatened to leave the World Health Organisation, China painted itself as a global, multilateral leader, unlike the US.

In contrast, Biden, who took office in January, has spoken frequently about the struggle between democracy and authoritarianism — a major theme at this week’s democracy summit.

Representatives from 111 countries have been invited, including Norway, New Zealand and Canada, all of which were among the top five in the EIU’s Democracy Index.

The guest list also includes “several states with authoritarian characteristics”, the Carnegie Endowment for International Peace noted. Three countries attending — Angola, Democratic Republic of the Congo (DRC) and Iraq — are considered “Not Free” in the 2021 Freedom in the World report by Freedom House, while a further 31 are considered “partly free”.

“Rather than limit participation to a core group of committed democracies, Biden’s team opted for a big tent approach,” Carnegie said.

By holding its own event, China is attempting to “dilute, redefine and weaken Biden’s efforts” to use US ideology as a rallying point for global dialogue, Sung said. “It’s not directly confronting the West or its narrative as well, but it’s trying to make room for its own definition and plausible deniability” that China can interpret concepts as it sees fit.

Not all of China’s signalling about Western democracy has been so subtle, however.

Shortly after the US Summit For Democracy was announced in late November, Chinese Foreign Ministry Spokesperson Wang Wenbin called US democracy a “disastrous state” that has “privatised” democratic values.

On Sunday, China’s Ministry of Foreign Affairs released a critical report about the state of democracy in the US, which also said a single “yardstick” should not be used to “measure diverse political systems in the world”.

With the release of the report and a renewed string of criticism of the US model, China was probably signalling to other countries attending the US summit on Thursday that they should push back against US ideology – and could even be at risk from it, as China claims.

The US Summit is to be accompanied by a new round of sanctions from the US Treasury on institutions and individuals who “undermine democracy” and carry out human rights abuses, according to Reuters news agency. Officials accused of involvement in the crackdowns in the far western region of Xinjiang and Hong Kong have already been subjected to sanctions to which China has responded with fury.

“We know many participants at the upcoming summit are democracy with an asterisk, so to speak, and so China is trying to remind these outlier democracies that there may be a lot more you have in common with China than you do with the US,” ANU’s Sung said.

He said that China’s message to the rest of the world is this: “When the summit for democracy is trying to come out with any accusatory language that tries to make China look unfavourable, maybe you shouldn’t sign on too much because it might hurt you too, or try to soften language because it’s not just in China’s interest, but in your own interest.”