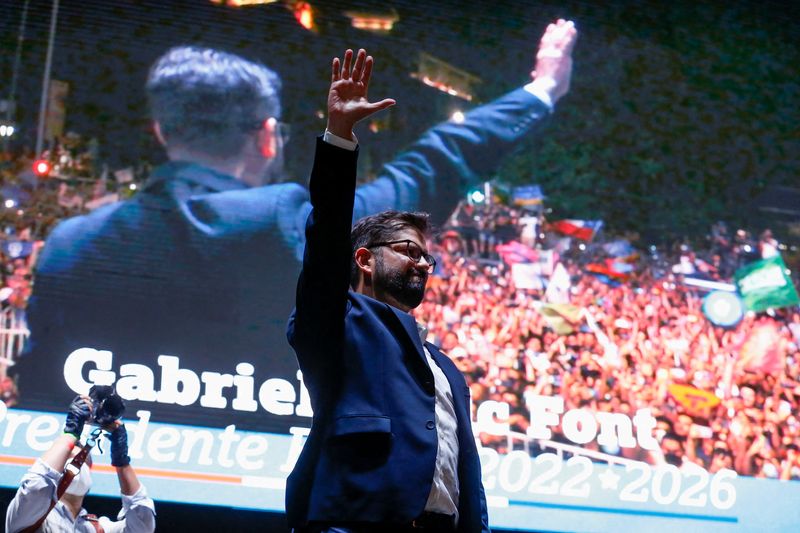 By Fabian Cambero, Anthony Esposito and Natalia A. Ramos Miranda

SANTIAGO (Reuters) – Chile’s left partied into the early hours of Monday with thousands taking to the street with flags and banners in capital Santiago to celebrate the election win of 35-year-old Gabriel Boric, who will become the country’s youngest ever President.

The win marked another advance for Latin America’s left, and bolstered talk of a new ‘pink tide’ in the region, as raging poverty fanned by the coronavirus pandemic sways voters towards those who promise bigger government and higher social spending.

“I’m very excited because this is an achievement of the people. There have been many years of abuse, and we need a renovation within politics,” said Boric supporter Patricia Garrido amid crowds celebrating on the streets of the capital.

“I have a lot of faith and hope in the youth.”

Boric’s rise – and the wider polarization of the vote – had rattled Chile’s markets and spooked mining firms concerned by his rhetoric to “bury” the country’s market-orientated economic model, push higher taxes and tighten environmental regulation.

In his victory speech on Sunday, he touched upon indigenous rights, gender equality and the environment, though he also talked about fiscal responsibility and said he would look after the economy. He did though take aim at mining projects that hurt the environment.

“We have an enormous challenge. I know that in the coming years, the future of our country is at stake, so I guarantee that I will be a president who cares for democracy and does not risk it,” he said.

“I will firmly fight against the privileges of the few, and I will work every day for the quality of the Chilean family.”

“It’s spectacular. At one point, we thought it was going to be closer. Luckily fascism didn’t win from the current far-right,” said Andres Rodriguez, another Boric supporter.

“There is a big project behind what we are proposing: we want to unify the system and equalize things a bit.”

Despite a campaign that at times turned heated between the two polar opposite candidates, Kast quickly recognized the win, congratulating Boric and calling for the result to be respected, important as the country tries to heal and unify.

“I’m super excited,” said Cristian Aburto, a Boric supporter who was working in a polling station.

“I think the most important thing is seeing the people here together. We all want people to be united.”