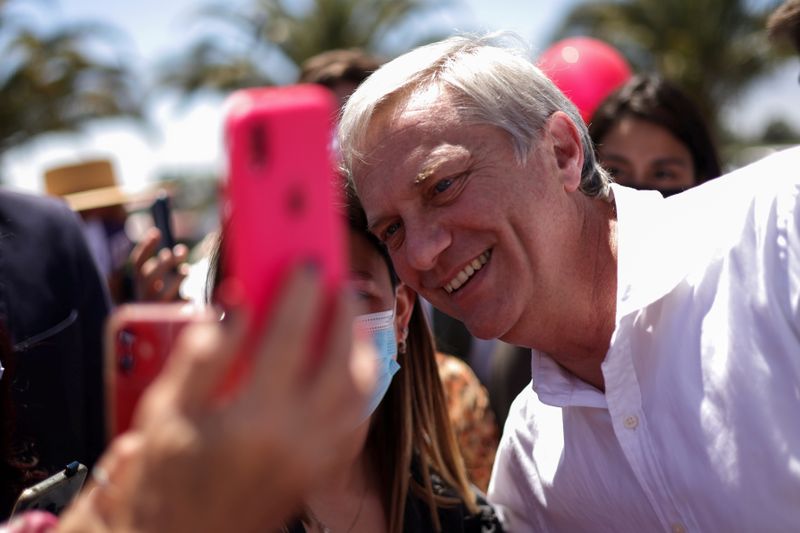 FILE PHOTO: Chilean presidential candidate Jose Antonio Kast from far-right Republican Party meets with supporters during a campaign rally in the outskirts of Santiago, ahead of the first round of presidential elections on November 21, Chile, October 25, 2021. REUTERS/Ivan Alvarado/File Photo

By Gram Slattery, Natalia A. Ramos Miranda and Fabian Cambero

SANTIAGO (Reuters) – After two years of dramatic street protests and the election of a left-wing body to re-write the nation’s constitution, Chileans surprised analysts, markets and even themselves on Sunday night by favoring a right-wing presidential candidate and delivering significant gains to conservatives in Congress.

With 99.99% of votes counted as of Monday morning, ultra-conservative former congressman Jose Antonio Kast had won 27.91% of the vote, while leftist lawmaker Gabriel Boric had come in second, with 25.83%. As both fell well short of the 50% threshold needed to win outright, they will now advance to a Dec. 19 runoff.

Kast, an ultra-conservative who has pledged a crackdown on crime and illegal immigration, appears to have the momentum, though Boric can still eke out a victory if he wins over enough centrists, analysts said.

Still, the results of congressional elections may make the radical changes to Chile’s free-market model that Boric has promised out of reach. Leftist and center-left coalitions lost significant ground in both the upper and lower houses, with neither the Right nor the Left expected to emerge with a functioning majority.

It was a far cry from a vote this May, when Chileans favored left-wing independents when selecting representatives to the body charged with re-writing the nation’s Pinochet-era constitution.

“The Right got 25 of 50 Senate votes, so it’s going to be very difficult for any of the two major coalitions in the Senate to pass legislation,” said Kenneth Bunker, head of political consultancy Tresquintos.

“For the conservative sectors, this is not a problem as they are in favor of the status quo, but for the opposition it is very bad news.”

Chile’s benchmark IPSA equities index was up some 8% in mid-morning trade, while the country’s peso currency gained ground against the dollar overnight.

Mary-Therese Barton, Head of Emerging Debt at Pictet Asset Management, said the rally in the peso was due to relief that the make-up of Congress is split, which will act as a moderating force if Boric wins.

“Markets’ first reaction has certainly been positive. It’s less to do with the presidential side and more to do with Congress,” she said.

In the presidential runoff, eyes will now be on how successful both candidates will be at winning voters outside their traditional bases of support.

Perhaps the biggest mystery will be how those who voted for libertarian economist Franco Parisi will cast their votes. Parisi, who lives in the United States and never set foot in Chile during the campaign, surprised many by finishing third with 12.8% of the vote.

“The Parisi voter is neither on the Left nor the Right,” said Guillermo Holzmann, a professor at the University of Valparaiso.

“This is a vote that will need a lot of analysis.”