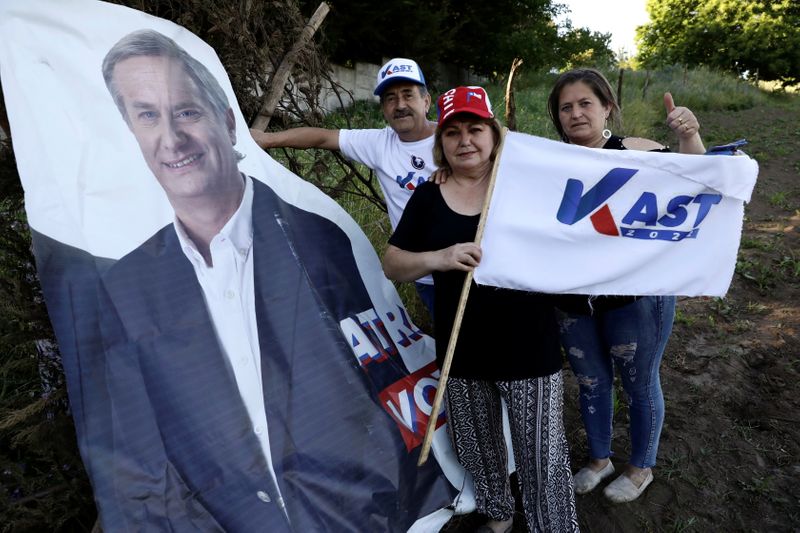 Farmer Luis Jara and his family pose for a picture next to a banner of Chilean presidential candidate Jose Antonio Kast from the far-right Republican Party, while they prepare to attend Kast’s campaign rally in southern Yumbel, Chile, November 23, 2021. Picture taken November 23, 2021. REUTERS/Juan Gonzalez

Kast – often likened to Brazil’s blunt-talking President Jair Bolsonaro – has found a receptive audience for his ‘law and order’ message, propelling him to a first-round win https://www.reuters.com/world/americas/chileans-head-polls-with-two-radically-different-visions-ballot-2021-11-21 on Sunday.

That’s a problem for leftist candidate Gabriel Boric, who arose to prominence as a student protest leader but needs to convince more than just his core support of young, urban voters if he is to clinch a win in the second round on Dec. 19.

With their two wildly different visions for Chile’s future, Kast and Boric will face each other in the run-off, with Kast the slight favorite.

His law and order message https://www.reuters.com/world/americas/burning-metro-chile-election-divides-voters-between-protest-order-2021-11-20 will be key.

Many Chileans say they are tired of crime, illegal immigration, and unrest. Regular protests against inequality in recent years have left the sidewalks plastered in flyers and graffiti – and residents weary.

Concerns are particularly strong in regions of Chile’s far north – which has seen high levels of immigration – and in the bosky southern provinces of places like La Araucania, now in a state of emergency due to clashes between the state and Mapuche indigenous groups demanding the return of ancestral lands.

“The people there want a firm hand,” said Alberto Ceballos, 42, a Kast voter who lives in the southern region of Nuble and works in the forestry industry. His work often takes him to La Araucania.

Ceballos said many voters like him associated Boric with the widespread protests https://www.reuters.com/article/us-chile-protests/violence-resurges-in-protest-racked-chile-nearly-300-arrested-idUSKBN20Q1QD of 2019, which at times turned violent, with clashes with police and property vandalized and burned.

“In Nuble the people are hard-working and traditional. They don’t want to lose what they have achieved with so much effort and sacrifice,” he said.

In Nuble, Kast had well over double Boric’s vote in the first round, with an even larger gap in La Araucania.

In the far north, a sparsely populated desert region bordering Bolivia and Peru, Kast also scored wins in the first round, with Boric pushed into third place.

“Kast is the only one who offers clear solutions,” said Melitza Lopez, 34, a nurse from the northern port city of Iquique.

Iquique hit the headlines https://www.reuters.com/world/americas/they-yell-ugly-things-migrants-chiles-north-fearful-after-fiery-protests-2021-09-27 in recent months due to protests by residents over migrants, many from Venezuela, setting up tents in the city square. A migrant camp was cleared by police and migrant families’ possessions burned.

Lopez said she was worried to go into the city center because she feared street violence and crime.

“It is not that I don’t want more foreigners to come here, but that they do so legally and contribute to the country,” she said. “Iquique is a small city and it is overflowing.”

Police statistics indicate murders rose in Chile in 2020 but the country remained one of the least violent in Latin America. Chilean crime and justice non-profit Fundacion Paz Ciudadana said this year that there had not been significant changes in the numbers of people falling victim to crimes in the last two decades.

But the perception remains, and in the wake of the first-round vote, Boric, 35, talked about tackling crime and drug trafficking, one of the first times he had turned attention to the theme.

He had posted a good win in and around capital city Santiago, and eked out a narrow victory in his home region of Magallanes and Chilean Antarctica, in the far south. But he only won in four of Chile’s 16 regions, while Kast won in 10.

Miguel Angel Lopez, a professor at the Institute of Public Affairs and the Institute of International Studies at the University of Chile, said the north traditionally tilted left, while the south was generally more conservative.

But winning over voters far from the capital would need Boric to take the momentum away from Kast’s popular law and order spiel.

“The regions want greater participation, greater development,” said Lopez. “In the north, immigration is one factor, but it is one among many.”