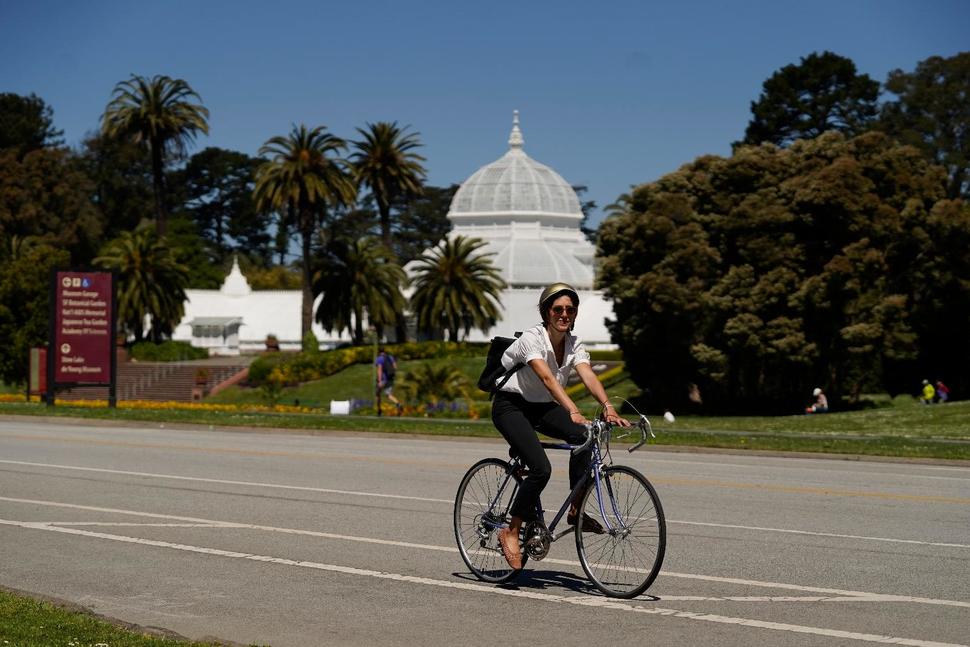 Environmentally friendly San Francisco closed miles of streets to automobiles during the pandemic so that people could exercise and socialize safely.

For Vanessa Gregson, the four-lane highway that borders the beach along San Francisco’s Pacific Ocean is now an automobile-free sanctuary where she can blissfully ride her bicycle and enjoy the quiet.

Like cities from Paris to New York that shut roads to motorists when the coronavirus hit, environmentally friendly San Francisco closed miles of streets to automobiles so people could exercise and socialize safely.

Now, pedestrian advocates want to keep some of San Francisco’s most prominent streets off-limits, like the main road into Golden Gate Park. Others are pushing back, saying they need to drive to work, drop off kids and get around.

The debate has been marked by dueling rallies and strident arguments over safety and climate change in the densely packed city. On social media, customers threatened to boycott a bakery whose owner expressed support for reopening the main oceanside thoroughfare known as the Great Highway to cars; others came to her defense.

Shamann Walton, president of San Francisco’s Board of Supervisors, was mocked for likening the closure of John F. Kennedy Drive in Golden Gate Park to the Jim Crow South, including by fellow African Americans who call his accusations of segregation silly. Walton says he worries that closing the street and its free parking will affect low-income families that can’t easily bike or take transit to the park.

For Tim Boyle, who lives near the four-lane beachside highway, life has been anything but peaceful. Unable to use the main road, massive delivery trucks, gangs of motor bikes and impatient drivers now hurtle through his once-sleepy neighborhood.

Boyle, whose son has cerebral palsy, says taking out their wheelchair-equipped van has become a nightmare. “Essentially I’m stopping traffic on any given day, four to 10 cars backed up on each side just so I can pull my own car into my driveway,” he said.

San Francisco officials started turning streets into pedestrian-friendly promenades in April 2020 after the mayor declared an emergency. Officials closed more than 45 miles (72 kilometers) of neighborhood corridors and are studying which ones could be permanent.

They also sealed off a 1.5-mile (2.4-kilometer) portion of JFK Drive, the main thoroughfare through Golden Gate Park, which sees more than 24 million visitors a year, and a 2-mile (3.2-kilometer) stretch of the Great Highway — now renamed by some as the Great Walkway — that carried more than 18,000 vehicles a day before the pandemic.

San Francisco’s streets are scheduled to reopen 120 days after Mayor London Breed lifts the COVID-19 emergency declaration, which could come next month. Various agencies are navigating the public debate before deciding whether to fully reopen the Great Highway and JFK Drive, open them in part or keep them closed to vehicles. The Board of Supervisors will have the final say, said Tamara Aparton, a city parks spokeswoman.

San Francisco is no stranger to shedding auto infrastructure for green spaces. Leaders chose not to replace the Embarcadero freeway after it was damaged in the 1989 Loma Prieta earthquake, replacing it with a boulevard that now doubles as a popular tourist destination.

Despite the testy debate, most people are probably in the silent middle, wanting both open space and clear transportation routes, said Connie Chan, a supervisor whose district is affected by the closures along the beach and in Golden Gate Park. “They just want to be able to go where they need to go, and not be stuck in traffic,” she said.

Katharine Lusk, co-director of the Boston University Initiative on Cities, said more than 90% of 130 U.S. mayors in 38 states surveyed last summer reported they created more space for outdoor dining by using parking spots or closing streets. Nearly half closed some streets to through-traffic; a smaller portion shut streets entirely to autos. While only 6% said they plan to make those changes permanent, Lusk wonders if that might change with rising demand.

On a recent sunny weekday, a few dozen people organized by Walk San Francisco toasted the one-year anniversary of the street closure in Golden Gate Park. Charles Oppenheimer said his daughter Olivia, 11, once feared riding through the third most-visited city park in the United States.

“There’s cars double-parked and rage drivers through the park, honking at kids, and now that it’s shut down, it’s so much better,” he said.

Near the west end of Golden Gate Park, more than 100 people gathered before blockades on the highway earlier this month, waving signs calling to reopen the road. Passing drivers honked in support as a musician blew tunes on a bright pink sousaphone.

The highway runs two lanes each way, with sandy beach and the Pacific Ocean on one side and a protected pedestrian path edged by succulents on the other. A parallel two-lane street has homes on one side, many with placards pleading to “Open the Great Highway.”

Since the neighboring streets began absorbing displaced traffic, Judi Gorski has documented numerous crashes. The car fumes, speeding, noise and near-wrecks make her feel trapped in her home of four decades, where she says “the traffic goes on all night long.”

For photographer Steve Rhodes, who walked one recent day along the nearly empty Great Highway after visiting the de Young Museum in Golden Gate Park, it is liberating to have the space to move around.

“The intersections with the cars are just a nightmare,” he said. “There should be more streets closed and it’s going to have to happen, because people are going to have to rely less on cars.”