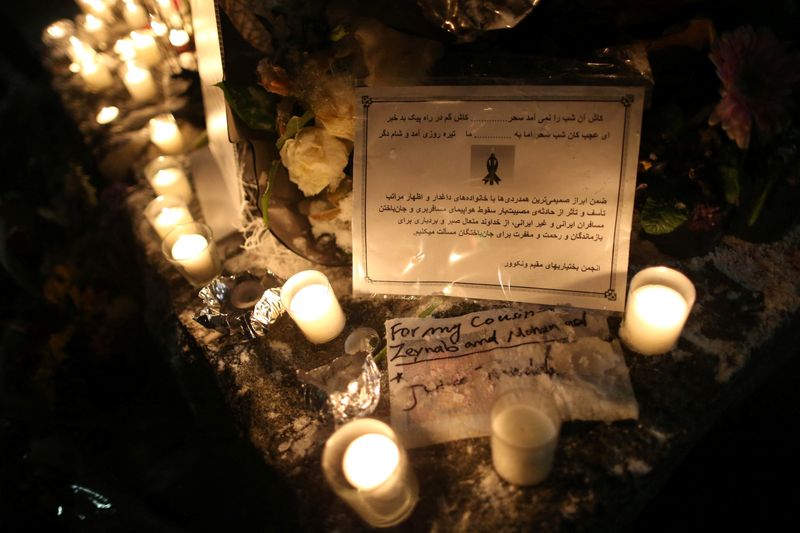 Mourners attend a vigil for the victims of a Ukrainian passenger jet which was shot down in Iran, in North Vancouver, British Columbia, Canada January 14, 2020. REUTERS/Jesse Winter

(Reuters) – A court in Ontario, Canada, has awarded C$107 million ($83.94 million), plus interest, to the families of six people who died when the Iranian Revolutionary Guards downed a Ukraine International Airlines plane near Tehran two years ago.

Iran shot down the airliner in January 2020. All 176 people onboard were killed, including 55 Canadian citizens and 30 permanent residents.

The six family members awarded compensation by the Ontario court lost spouses, siblings, children, nieces and nephews aboard Flight 752, their lawyer, Mark Arnold, said in a statement on Monday. They had filed a civil lawsuit against Iran and other officials they believe were to blame for the incident.

The lawyer said his team will look to seize Iranian assets in Canada and abroad. He said Iran has oil tankers in other countries and his team will be looking to seize whatever it can to pay what the families are owed.

The decision by Justice Edward Belobaba of Ontario’s Superior Court of Justice was dated Dec. 31 and announced by Arnold on Monday.

The case was filed by Shahin Moghaddam, Mehrzad Zarei and Ali Gorji. Fearing reprisals from Iran, some of the other plaintiffs withheld their names, CBC News reported earlier.

A special Canadian forensic team had produced a report in mid-2021 that accused Iran of incompetence and recklessness over the downing of the Ukrainian passenger plane. Iran criticized the report as being “highly politicized”.

The report found that while the shooting down of Ukrainian International Airlines flight 752 had not been premeditated, it did not absolve Iranian officials of responsibility for the incident.

Iran admitted it shot down the airliner shortly after takeoff from Tehran in January 2020 and blamed a “disastrous mistake” by forces on high alert during a confrontation with the United States.

At the time, Iran was on edge about possible attacks after it fired missiles at Iraqi bases housing U.S. forces in retaliation for the killing days before of its most powerful military commander, Qassem Soleimani, in a U.S. missile strike at Baghdad airport.

(Reporting by Kanishka Singh in Bengaluru; Editing by Sandra Maler)