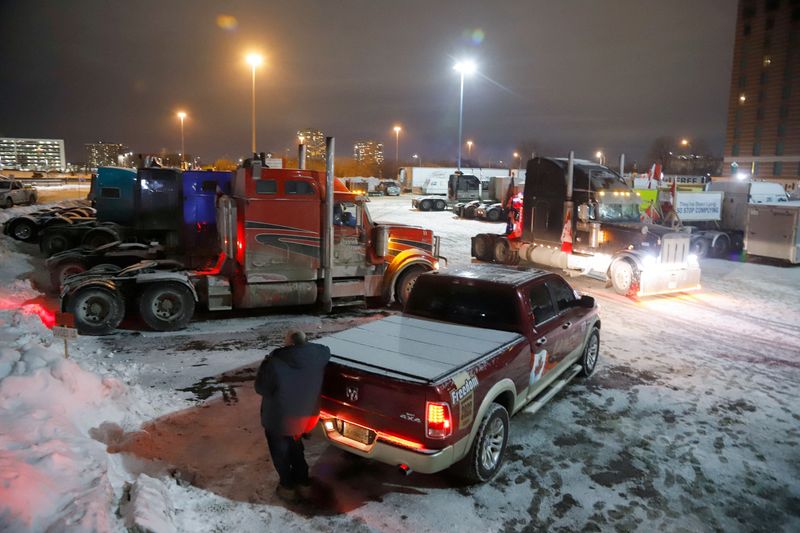 Trucks sit in a staging area east of downtown after police raided the truckers’ stockpile of fuel, as truckers and their supporters continue to protest against coronavirus disease (COVID-19) vaccine mandates, in Ottawa, Ontario, Canada, February 6, 2022. REUTERS/Patrick Doyle

OTTAWA (Reuters) – As the protest against the Canadian government’s health measures and vaccine mandates entered an eleventh day on Monday, police have threatened to clamp down after facing criticism for lack of action that has crippled the national capital.

The “Freedom Convoy” consisting largely of truckers began as a movement against a Canadian vaccine requirement for cross-border drivers. But it has since evolved into a rallying point against Prime Minister Justin Trudeau’s strict measures to fight the pandemic.

Downtown Ottawa, home to Canada’s parliament, central bank, and buildings including Trudeau’s office, has been largely in lockdown after truckers occupied the streets. Late night honking and occasional fireworks have disrupted the normally quiet life of the residents in the city.

A hearing into a proposed class-action lawsuit seeking an injunction to silence the constant honking by truckers will take place on Monday.

On Sunday night, police began removing gas and fuel supplies at a logistics encampment set up by protesters, after the city’s mayor declared a state of emergency on Sunday.

A well-organized supply chain — including portable saunas, a community kitchen and bouncy castles for children — has sustained the protesters. It has relied partly on funding from sympathizers in the United States, police said.

The Canadian government has refused to back down on the issue. Trudeau, who is isolating after testing positive for COVID-19, has ruled out using the military to disband the protest.

Trudeau and his family left their downtown home after truckers started arriving in Ottawa and his location has not been disclosed due to security concerns.

Over the weekend, protests spilled over into other large Canadian cities, including the financial capital Toronto, and were met with counter demonstrations. The protests, including in Ottawa, have been largely peaceful.

Canadians have largely followed government’s health measures and nearly 79% of the eligible population has taken double dose of the vaccine. But recent polls have shown frustrations against restrictions are growing.