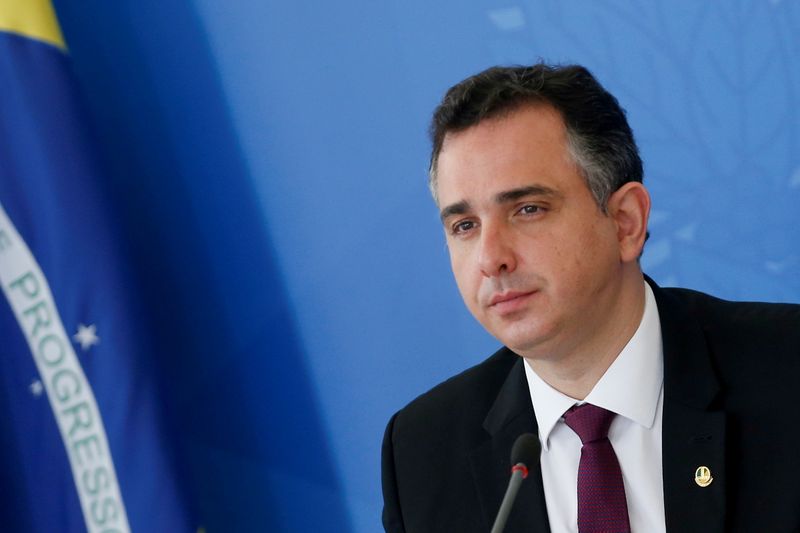 FILE PHOTO: President of Brazil’s Senate Rodrigo Pacheco looks on during a news conference after the meeting of the National COVID-19 Coordinator to combat the pandemics, in Brasilia, Brazil, April 14, 2021. REUTERS/Adriano Machado

BRASILIA (Reuters) -Brazil’s far-right President Jair Bolsonaro ignored calls to drop his feud with the Supreme Court on Friday and called one of its justices a “son of a whore,” amid rising tensions over his unfounded claims the nation’s voting system is vulnerable to fraud.

Speaking to supporters in southern Brazil, he insulted Luis Roberto Barroso, the top court justice who also heads the Supreme Electoral Court. The insult was part of a live broadcast shared on Bolsonaro’s Facebook account but later deleted. Copies continue to be shared on social media.

Bolsonaro has railed for weeks against the electronic urns used in Brazil and pushed for the adoption of printed receipts that can be counted if any election result is disputed.

Critics say Bolsonaro, like former U.S. President Donald Trump, is sowing doubts in case he loses next year’s presidential election. He has threatened not to accept the result if the system is not changed.

With his popularity falling after overseeing the world’s second-highest COVID-19 death toll, opinion polls show Bolsonaro trails former leftist President Luiz Inacio Lula da Silva, though neither of them has officially announced they will run.

Earlier this week the Supreme Court approved an investigation into the president’s unfounded accusations about voter fraud.

On Thursday, in Bolsonaro’s worst set-back in Congress since taking office in 2019, a committee voted to shelve a constitutional amendment he has been pushing that would have adopted printed ballots.

Earlier on Friday, Senate President Rodrigo Pacheco criticized Bolsonaro for his attacks on the Supreme Court and offered to mediate, saying the president’s insults were unacceptable.

Pacheco said Bolsonaro must respect the results of next year’s election even if he fails to change the all-electronic voting system – which the president groundlessly claims is vulnerable to tampering.

“Any threat, however slight, to this democracy will be promptly rejected by the Senate,” Pacheco said in a GloboNews television interview.

The Senate head said anyone advocating a “democratic retreat” or the suspension of next year’s elections would be seen as an “enemy of the nation.”

“I think a majority in Congress at this moment want to maintain the electronic voting system,” he said.