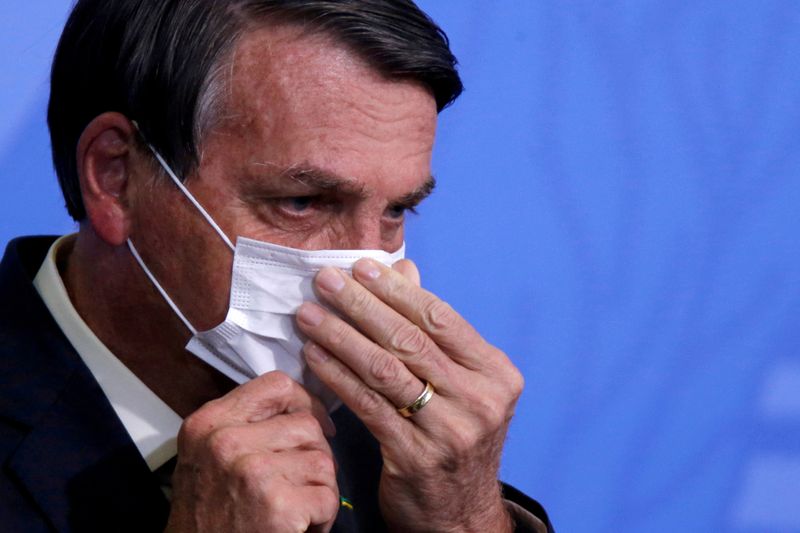 FILE PHOTO: Brazil President Jair Bolsonaro looks on as he adjusts his protective face mask during a ceremony launching a program to expand access to credit at the Planalto Palace in Brasilia, Brazil, August 19, 2020. REUTERS/Adriano Machado//File Photo

The rights group said it had identified 176 accounts that were blocked by Bolsonaro, including those of journalists, members of congress and social media influencers with more than a million followers.

Social media has been a key means of public communication for Bolsonaro, helping him win office in 2018 and interact with supporters. He has 6.9 million followers on his Twitter account, 14.2 million on Facebook and 18.6 million on Facebook’s Instagram photo-sharing app.

“He is trying to rid his social media accounts of people and institutions that disagree with him and turn them into spaces where only applause is allowed,” said Maria Laura Canineu, Brazil director at Human Rights Watch.

The presidential press office did not immediately respond to a request for comment.

As president, Bolsonaro has used social media to make official announcements, comment on foreign affairs and lash out at his opponents.

Blocked people can no longer comment on his posts, which prevents them from participating in public debate and stops journalists from asking questions, infringing on freedom of the press, Human Rights Watch said.

In April and June, the group posted messages on its Brazil Twitter, Facebook and Instagram accounts asking users if Bolsonaro had blocked them. More than 400 said yes, the vast majority on Twitter. Among them, 176 provided screenshots showing their usernames. Most said they were blocked after publishing comments criticizing the government.

In a case involving former U.S. President Donald Trump, a U.S. court ruled in 2019 that a public official cannot block people from social media accounts used for official business just because they express views with which the official disagrees.