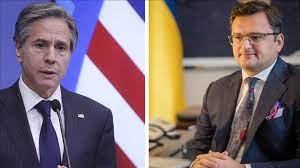 US Secretary of State Antony Blinken reiterated US support for Ukraine in a call with Ukrainian Foreign Minister Dmytro Kuleba on Monday, following unsubstantiated Russian allegations that Ukraine plans to use a “dirty bomb.”

“The Secretary reaffirmed enduring U.S. support for Ukraine in the face of continued Russian aggression, atrocities, and rhetoric surrounding so-called ‘dirty bombs’ in Ukraine,” according to a readout from State Department spokesman Ned Price.
“He noted our commitment to work with Allies and partners to continue meeting Ukraine’s security assistance needs on the battlefield,” Price added.

Kremlin’s allegations dismissed: Russia’s claims that Ukraine plans to use a dirty bomb have been strongly refuted by Ukraine, the US, the United Kingdom and the European Union, which have in turn accused Moscow of trying to launch its own false-flag operation.

A dirty bomb is a weapon that combines conventional explosives like dynamite and radioactive material like uranium. It is often referred to as a weapon for terrorists, not countries, as it is designed to spread fear and panic more than eliminate any military target. There is no record of such a weapon ever being used successfully.

On Monday, the UN’s nuclear watchdog has said it will send safeguard inspectors to visit two nuclear locations in Ukraine at the request of authorities in Kyiv.