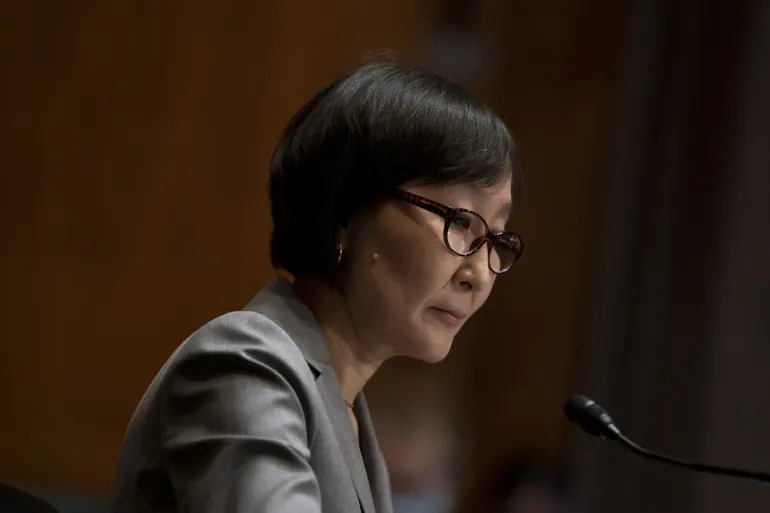 President Joe Biden’s pick to lead a key U.S. banking regulator has withdrawn her name from consideration, according to a statement from the White House.

Biden accepted Saule Omarova’s request to no longer be the nominee to serve as Office of the Comptroller of the Currency, according to a statement Tuesday.

While Biden’s choice of an outspoken Wall Street and cryptocurrency critic delighted progressive groups and lawmakers such as Senator Elizabeth Warren, the choice appeared to be too controversial to win backing from moderate Democrats that the candidate would need in the evenly divided Senate.

Omarova’s detractors have highlighted her origin in Soviet Union-era Kazakhstan, her studies in Moscow and her academic research advocating for a fundamental overhaul of the financial system.

Her defenders say the personal attacks on Omarova are unfair, and that she’s a well-qualified nominee. Omarova would be the first woman and non-White person to hold the job.

At her confirmation hearing, moderate Democrats including Jon Tester of Montana and Mark Warner of Virginia expressed concerns about Omarova’s views.

For her part, Omarova has said that she rejects communism as “deeply flawed,” and called herself a “free-market idealist.” She said she was surprised by the “depravity” of the attacks on her nomination. She’s also praised the U.S. banking system as the best in the world and insisted her academic writings were thought experiments that weren’t necessarily meant as a practical blueprint.