Share
Tweet
Share
Share
Email
Comments
The $2.7 million beach house, which the couple purchased in 2017, is located in an oceanside community and, of the Bidens’ three residences (including the family home in Wilmington, Delaware, and the White House), several people who know her told CNN it is Jill Biden’s favorite. “Anyone who knows the first lady knows how much she enjoys her time at home in Rehoboth,” confirmed LaRosa. 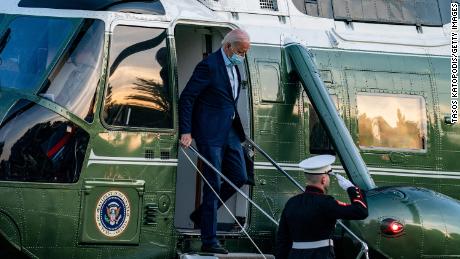 The house was the culmination of a promise Joe Biden made to his wife after he left the vice presidency under Barack Obama and the couple signed a lucrative, multimillion book deal. As Jill Biden has shared, Joe Biden told his wife he would buy her a beach house in Rehoboth, a “dream” of hers for many years, one of the people who knows her said, a place she could host family and relax. In March 2020, Biden told Vogue magazine, “I wanted it to be the kind of place where you can come in in your wet bathing suit and bare feet and I can just take the broom and brush out the sand. And that’s what this is. Everything’s easy.”
The trip this week will be a “quiet” one, said another acquaintance familiar with the schedule, who added there are no special events planned for Biden’s birthday. Extended family members are expected to join the first couple on Thursday, including daughter Ashley Biden, who resides in Philadelphia.
Biden’s 70th birthday marks another milestone beyond her age. She now becomes the oldest sitting first lady in modern United States history. The next-oldest first ladies in the White House were Bess Truman, Nancy Reagan and Barbara Bush, who were each 67 when their husbands left office. The average age of a first lady in the White House for the last several decades is 50; Helen Taft, Grace Coolidge, Eleanor Roosevelt, Rosalynn Carter, Hillary Clinton, Michelle Obama and Melania Trump all marked their 50th years during their husbands’ administrations.
Though she is technically older than her predecessors, a distinction her husband also shares with his, Biden is an active American senior. She goes to Barre exercise classes two to three times a week, and she has been an avid runner for most of her life. Friends say she is a healthy eater — unlike Joe Biden, who loves ice cream, Jill Biden is not a fan.
The President and first lady are expected to return to the White House on Friday, and pass the weekend in Washington.