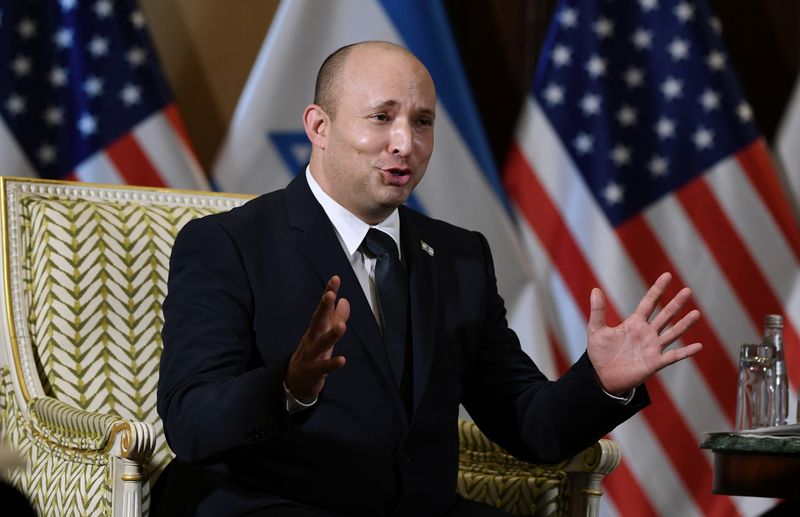 Israeli Prime Minister Naftali Bennett gestures as he speaks during a meeting with U.S. Secretary of State Antony Blinken at the Willard Hotel in Washington, D.C., U.S. August 25, 2021. Olivier Douliery/Pool via REUTERS

By Matt Spetalnick and Jarrett Renshaw

WASHINGTON (Reuters) – President Joe Biden will tell Israeli Prime Minister Naftali Bennett at the White House on Thursday that Washington shares Israel’s concern that Iran has accelerated its nuclear program but remains committed for now to diplomacy with Tehran.

Briefing reporters on their first face-to-face talks, a senior U.S. official said: “Since the last administration left the Iran nuclear deal, Iran’s nuclear program has just dramatically broken out of the box, and it’s accelerating from week to week.”

Iran has more advanced centrifuges and uranium stockpiles as well as technology so that nuclear “breakout” – the capability to produce a bomb – “is now down to just a few months,” the official said and added the two leaders would discuss “what to do about it.”

The administration was increasingly alarmed by Iran’s nuclear activities, the official said, but signaled that Biden was sure to reject any entreaties from Bennett to halt efforts to revive the 2015 nuclear accord.

“We, of course, committed to a diplomatic path,” the official said amid stalled negotiations with Iran, where a new hardline president has taken power. “We think that is the best way to put a ceiling on the program and roll back the gains that Iran has made over recent years on the nuclear side.”

“If that doesn’t work, there are other avenues to pursue,” the official added, without elaborating.

Despite differences, U.S. and Israeli officials alike have expressed hope the White House meeting will set a positive tone between Biden, who took office in January, and Bennett, a far-right politician who ended Benjamin Netanyahu’s 12-year run as prime minister in June.

This would stand in sharp contrast to years of tensions between Netanyahu, who was close to Republican President Donald Trump, and the last Democratic administration led by Barack Obama with Biden as vice president.

The Biden administration puts much of the onus for tensions with Iran as well as its nuclear advances on Trump’s decision to scrap involvement in the nuclear deal negotiated under Obama.

Bennett’s visit gives Washington an opportunity to demonstrate business as usual with its closest Middle East ally while it contends with the chaotic situation in Afghanistan, Biden’s biggest foreign policy crisis since taking office.

Iran will top the agenda, with Bennett – who arrived in Washington on Tuesday – expected to push for a hardened U.S. approach to Israel’s regional arch-enemy.

In a report seen last week by Reuters, the International Atomic Energy Agency said Iran had accelerated uranium enrichment to near weapons-grade. Iran has consistently denied seeking a nuclear bomb.

PALESTINIANS AND NORMALIZATION DEALS ON AGENDA

Bennett has been less openly combative but just as adamant as Netanyahu was in pledging not to allow Iran, which Israel views as an existential threat, to build a nuclear weapon.

Israel is reported to have some 200 atomic warheads but it neither confirms nor denies having nuclear weapons under a strategy of “nuclear ambiguity” billed as warding off enemies while avoiding public provocations that can trigger arms races.

Biden and Bennett will also discuss the decades-old Israeli-Palestinian dispute. The U.S. president has again made a two-state solution a central part of Washington’s policy, but Bennett, a right-winger who heads an ideologically diverse coalition, opposes Palestinian statehood.

The Biden administration sees little chance of a near-term resumption of peace talks, which collapsed in 2014, “but there are a number of steps that can be taken to kind of dampen the risks of further sparks of conflict,” the official said.

The Biden administration has already emphasized it opposes further expansion of Jewish settlements on occupied land.

Biden will also discuss with Bennett behind-the-scenes efforts to get more Arab countries to normalize relations with Israel, the official said. This would follow in the footsteps of the United Arab Emirates, Bahrain and Morocco, which reached accords with Israel brokered by the Trump administration.

“There’s an awful lot of work going on to expand those arrangements to other countries,” the official said.