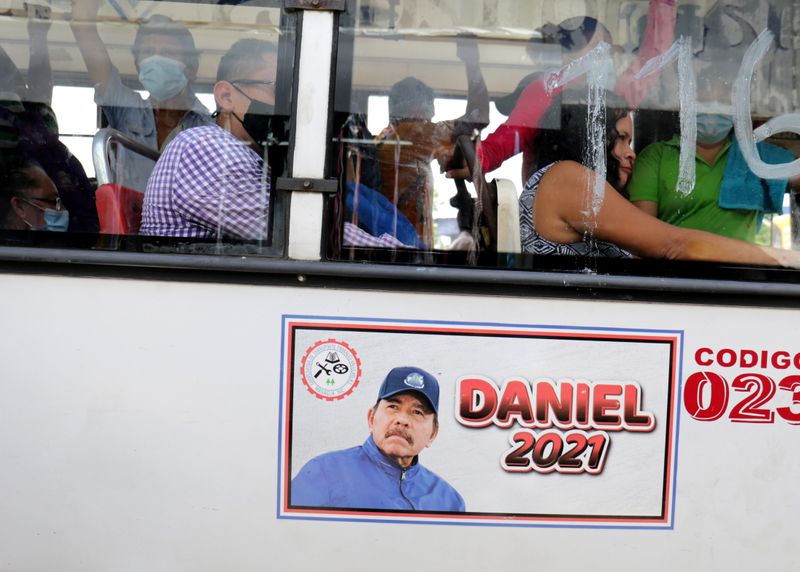 FILE PHOTO: A poster promoting Nicaragua President Daniel Ortega as a presidential candidate is displayed on a public bus ahead of the country’s presidential elections in November, in Managua, Nicaragua October 14, 2021. REUTERS/Maynor Valenzuela/File Photo

WASHINGTON (Reuters) -U.S. President Joe Biden on Wednesday signed into law a bill calling for more sanctions and other punitive measures against the government of Nicaraguan President Daniel Ortega, who extended his grip on power in an election that Washington denounced as a sham.

Biden, who has accused Ortega of orchestrating Sunday’s vote as a “pantomime election that was neither free nor fair,” gave his approval to the bill a week after its final passage by the U.S. Congress with overwhelming bipartisan support.

The Biden administration plans to announce new Nicaragua sanctions “very soon,” a senior State Department official told Reuters on Tuesday, saying it would be just the first in a series of U.S. steps that will “ramp up over time.”

Ortega, a former Marxist guerrilla leader, clinched his fourth consecutive term after jailing political rivals and cracking down on critical media in an election that drew international condemnation before and after it was held.

Ortega on Monday night derided his U.S. critics as “Yankee imperialists” and accused them of trying to undermine Nicaragua’s electoral process. Cuba, Venezuela and Russia all have offered Ortega their backing.

The White House announced Biden’s bill signing as members of the Organization of American States (OAS) gathered in Guatemala for a previously scheduled meeting where the United States is working with other countries on what they hope will be a strong resolution against Ortega.

The so-called RENACER Act calls for sanctions on Nicaraguans deemed responsible for unfair elections, increased coordination of such measures with the European Union and Canada, and expanded U.S. oversight of international lending to Managua.

Previous sanctions imposed by Biden and his predecessor Donald Trump failed to deter Ortega, and many analysts are skeptical whether new measures will have much impact.

The State Department official declined to elaborate on sanctions in the works. But a U.S. government source last week said initial targets would likely be individuals, security force members and government-controlled companies.

The bill, which was introduced by Senator Bob Menendez, Democratic chairman of the Senate Foreign Relations Committee, also requires U.S. government reports on alleged corruption by the Ortega family, human rights abuses by security forces and Russian activities in the country, including military sales.

In addition, the administration is asked to review Nicaragua’s participation in the Central America Free Trade Agreement, which gives preferential treatment to exports to the United States.