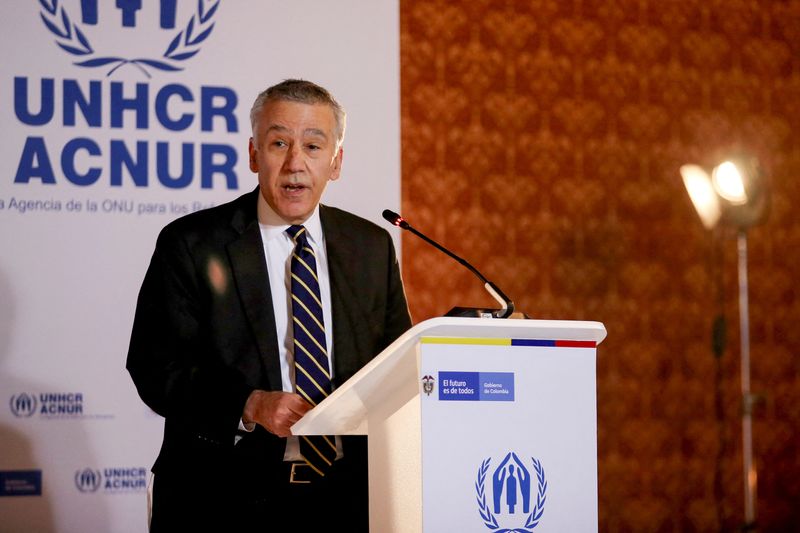 FILE PHOTO: Philip Goldberg, then U.S. Ambassador to Colombia, speaks during the announcement of the granting of legal status of temporary protection to Venezuelan migrants, in Bogota, Colombia February 8, 2021. REUTERS/Luisa Gonzalez/File Photo

Goldberg has served since 2019 as ambassador to Colombia and previously as charge d’affaires in Cuba and ambassador to the Philippines and Bolivia, among other postings.

Goldberg also worked as coordinator for the implementation of United Nations sanctions on North Korea over its nuclear weapons and missile programs from 2009 to 2010.

The post in one of the United States’ key allies has been filled by a charge d’affaires for more than a year since the last ambassador to South Korea, former navy Admiral Harry Harris, stepped down when Biden took office in January 2021.

While Seoul and Washington insist their alliance is “iron-clad,” the sanctions have been a source of controversy as they blocked South Korean President Moon Jae-in’s desire for more economic engagement with North Korea.

Harris’ tenure was marked by tension in the alliance as then-President Donald Trump pressed Seoul to pay billions of dollars more toward supporting the roughly 28,500 U.S. troops stationed there, while South Korea chafed https://www.reuters.com/article/us-southkorea-usa-idUSKBN1ZF0RT at the U.S. push for strict sanctions enforcement.

The nomination of Goldberg, who faces a Senate confirmation hearing, comes at a time of heightened tensions on the Korean peninsula over a spate of missile tests by North Korea, which has long been seeking relief from U.S. and international sanctions.

The tests have included the first of an intermediate range ballistic missile since 2017, raising fears that North Korea may resume tests of intercontinental ballistic missiles and nuclear bombs for the first time since that year.

Biden’s administration has repeatedly urged North Korea to return to dialogue aimed at persuading the reclusive state to give up its nuclear weapons programs but has been rebuffed, with Pyongyang saying it would not engage further unless Washington dropped hostile policies.