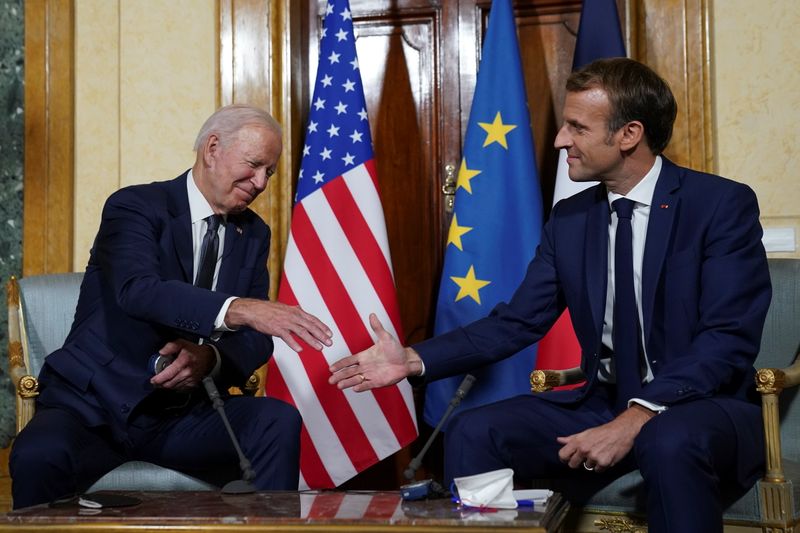 By Jeff Mason and Michel Rose

Biden used the meeting at the G20 summit in Rome, Italy, to try to turn the page on a relationship that came under strain over the U.S.-Australia security alliance, known as AUKUS, which also includes the United Kingdom. The pact effectively canceled a 2016 Australian-French submarine deal.

The U.S. decision to secretly negotiate a new agreement https://www.reuters.com/world/asia-pacific/aukus-deal-ensure-peace-security-indo-pacific-says-us-admiral-2021-10-14 drew outrage from Paris. France temporarily recalled its ambassador from Washington, canceled a gala in the U.S. capital and officials accused Biden https://www.reuters.com/world/us-move-dislodge-france-australia-submarine-deal-is-incoherent-french-ministers-2021-09-15 of acting like former President Donald Trump.

“I think what happened was, to use an English phrase, what we did was clumsy. It was not done with a lot of grace,” Biden said. “I was under the impression certain things had happened that hadn’t happened. And – but I want to make it clear: France is an extremely, extremely valued partner – extremely – and a power in and of itself.”

“I was under the impression that France had been informed long before that the deal was not going through. I, honest to God, did not know you had not been,” Biden told Macron.

Macron said his meeting with Biden was “important” and that it was essential to “look to the future” as his country and the United States work to mend fences.

Since the rift erupted, Washington has taken several steps to fix the relationship.

Biden and Macron spoke to each other https://www.reuters.com/world/europe/biden-macron-discuss-european-defense-will-meet-rome-white-house-2021-10-22 last week. Secretary of State Antony Blinken also visited Paris, where he acknowledged the United States could have “communicated better.” Vice President Kamala Harris also announced that she would travel to Paris in November and meet with Macron.

Biden and Macron met at the Villa Bonaparte, the French embassy to the Vatican, which a French diplomat said was a significant mark of goodwill from Biden.

“It’s an important gesture,” the French diplomat said, adding that the United States recognized that it underestimated the impact of its actions.

France now wants to see if Biden follows his words with actions. “Trust is being rebuilt. This is one step. Tokens of goodwill were given, we’ll see whether they follow through over the long term,” the diplomat said.